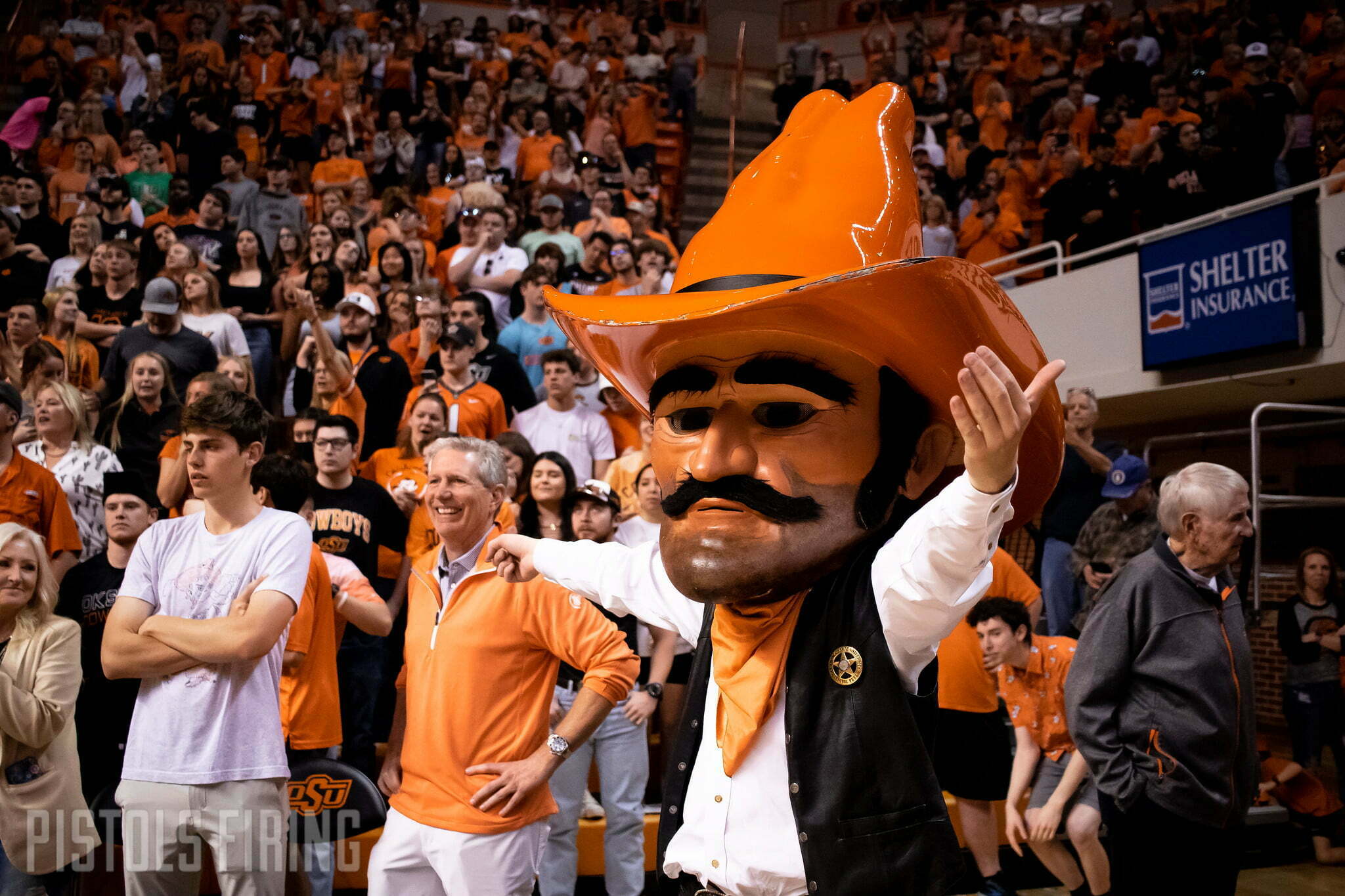 After seeing five of his players enter the portal this offseason, Mike Boynton made his first portal acquisition Monday when High Point transfer John-Michael Wright announced his commitment to the Cowboys.

A 6-foot point guard from North Carolina, Wright averaged 17.4 points, 4.9 rebounds and 2.9 assists in 86 career games with the Panthers and will come to Stillwater with two years of eligibility remaining. Wright spoke with PFB over the phone Tuesday morning. Here is what he had to say about his commitment, watching old westerns and Mike Boynton.

John-Michael Wright: “Well, getting into portal I had a lot of schools call me, and Oklahoma State was one of them. And I just felt like Coach [Mike] Boynton and the whole coaching staff really showed a lot of interest in me. I felt like there was a need for me at the program, that I could fit right in and just help the team. I grew up watching Oklahoma State. I was always a cowboys fan, and that was the mascot for the school. So, I just rooted for school just because of the mascot. It’s kind of weird when I was a kid. I felt like it was what I need to be.”

PFB: You were a fan of cowboys?

JMW: “Well, my stepdad used to watch a lot of old western movies when I was growing up. There were cowboys in it, and I just liked cowboys. Once I figured out that the Oklahoma State mascot was Cowboys, I was automatically an Oklahoma State fan, and now I’m also a Dallas Cowboys fan.”

PFB: When you say you grew up watching Oklahoma State, what were some of your earliest memories of that?

JMW: “There was this one guy, I think his name was Le’Bryan Nash or something like that. I remember watching him. He was pretty good. And then seeing Marcus Smart play at Oklahoma State, those are like the two guys that I most remember growing up watching that played at OSU.”

PFB: You mentioned a lot of schools reached out when you went into the portal, what other programs were you considering?

JMW: “Florida, Oklahoma, Seton Hall, Clemson, it was a lot of schools that I got called up by, but Oklahoma State stood out the most.”

PFB: You weren’t in the portal long. What about the process made it a quick decision for you?

JMW: “I felt like once I knew where I needed to be there was no point of me wasting any time going on other visits and all that. I’m not that type of person. I like to get things done so I can get myself situated. The summer session starts real soon, and I didn’t want to be taking visits all the way through May and then have to to jump a plane and just hop right into school at a certain university. I wanted to be able to relax, take some time off, get myself right mentally for what I’m about to embark on.”

PFB: Have you visited Oklahoma State yet?

PFB: Is that scary that you’re committed to some place you haven’t been to?

JMW: “Not really. I mean, for me, it was more of like a business decision. I’m sure the campus is nice and all. I’m sure the facilities are nice, but all I care about is game time at this point. Me being a senior, I made my decision based off of, you know, I did my homework on the roster, I did my homework on the coaches, and I just made [the decision] off just the basketball portion, nothing else.”

PFB: In doing your homework on the coaches, what do you think of Mike Boynton?

JMW: “He’s a good dude. From what I’ve heard and how I’ve talked to him, he seems like a real nice, down to earth guy. He’s pretty young, can be pretty relatable. Everybody I’ve talked to say he’s just a great coach. I’m excited. I’m excited to learn from him and to work with him.”

PFB: What was his pitch to you?

JMW: “He just kept it 100 with me. He told me how much I would help the team, but he also told me it wouldn’t be easy. He also told me I wouldn’t have any handouts, which I respect because I know he’s just not bluffing. That was really about it. He just told me about the roster they had, type of style of play they are and how I would fit. And it was up to me to make my decision.”

PFB: You mention the roster, what do you think about it?

JMW: “They got some pretty good players. I see they got their top two scorers [Avery Anderson and Bryce Thompson] returning, so that’s good. I know they got some real good bigs. So, it’s a good core group. I saw they had a lot of people go into the portal, but I mean, that’s understandable. I think, overall, they have a good team.”

PFB: Do you know any of the players personally? Have you crossed paths with anyone?

PFB: Have they reached out to you since you committed?

JMW: “Yeah, they have. A couple of them have. It’s been cool. They just text me like, ‘Excited to get you here,’ you know, ‘Let’s get to work,’ stuff like that. Nothing too crazy.”

PFB: You mentioned earlier that you’re going into your senior year. Because of COVID, you still have an extra year if you want it. Have you put any thought this early on to whether you want to use it or not?

JMW: “I know I have two years left. I just want to see how this year goes. You never know what can happen. I’m thankful that I’m able to have an extra year because of COVID, but I’m just focused on the upcoming year, how I’m going to impact the team and how I’ll do better for myself this coming year. The year after that will worry about itself when the time comes.”

PFB: Is there anyone you model your game after? Who are some NBA guys you watch most closely?

JMW: “I don’t really model my game after anybody. I like watching guys like Dame Lillard, like Devin Booker. But I really don’t think my game is similar to anybody’s in NBA. I haven’t really found anybody who I steal moves from and stuff like that. I feel like I have my own type of game. I still watch the guys and try to learn what I can from them, but I don’t think there’s a blueprint, a guy in the NBA that I play like.”

PFB: How would you describe your style of play then?

PFB: What was your high school story? How did you end up at High Point?

JMW: “Well, my senior year high school [at Fayetteville Academy in North Carolina], I had a great year. We won the state tournament. I had averaged like 20 points, like 10 assists because I was recruited as a point guard. [High Point coach] Tubby Smith came to one of my high school games, and I had a great game. He offered me right after the game. I had no intentions of going to High Point before that, but winding it down, I took a visit. I loved the campus. I loved the coaching staff. They told me I’d be pretty successful, be able to play right away. So, that’s what made me commit to High Point, and it worked out for me. They were a great coaching staff. Coach Tubby Smith taught me a lot, great guy to play for, and the school was amazing. Great fans, great students. Everything about it was good. So, I feel like I made the right choice.”

PFB: Why do you think you weren’t getting as much high-major love coming out of high school? Was it your size?

JMW: “Yeah, I think my size made a lot of schools doubt my game. I played pretty well in high school. A lot of high-major schools came to visit me while I was in high school, but they never wanted to pull the trigger. But it was fine. I didn’t let it put me down or anything. I just told myself I’m gonna go where it’s the best fit, and that’s really how this whole process for me transferring has been, what’s the best fit where I can sell my full package you know. So yeah, a lot of teams were scared to pull the plug, but I just used it as motivation. Now I have an even bigger chip on my shoulder going play at a high-major school. I already know there’s gonna be doubt, but I’m ready for the challenge.”

PFB: Tubby Smith is a legend in college coaching. What were some of the things you learned from him?

JMW: “He taught me a lot of stuff off the court. He’s just an old school guy, very fundamental, very structured. He taught me a lot of things about like, being mentally prepared for certain situations. He used to always say, ‘Stay ready so we don’t have to get ready.’ That motto kind of stuck with me throughout the three years, caused me to get in the gym, just being on point whenever my name is called for anything, whether it be to make a shot, make a pass, whatever. So with him, it was more mental. Skill-wise, it was more of the assistant coaches that helped me on the court developing, but Coach Tubby Smith taught me a lot of mental lessons, teaching me how to be a man and all that. He was like a father figure as a coach.”

PFB: Lastly, what are some of your goals for the upcoming season?

JMW: “Really, just getting better. Just helping the team. I want to help the team win the Big 12, do what I can. I’m gonna work my tail off. Like I said earlier, I’m excited for it. I don’t really have any individual goals right now. I just want to get on campus, feel everybody out, get used to the team, get used to how they play. And then we’ll see from there what happens.”