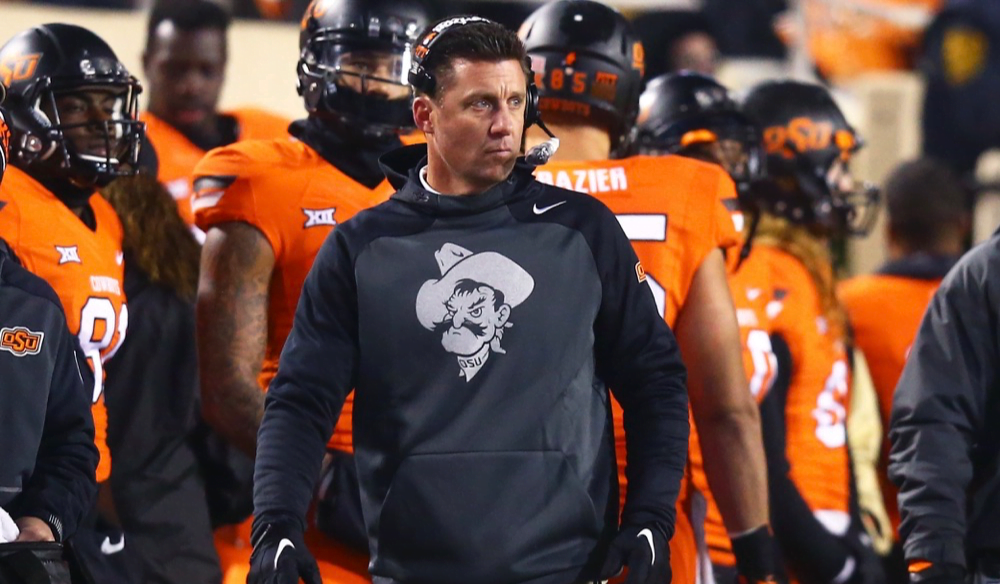 For the first time since 2004, Oklahoma State and Oklahoma will play before Thanksgiving. That 2004 game was the last one BG (Before Gundy), and the Pokes got pistol-whipped by Adrian Peterson before climbing back and narrowly losing 38-35. Since Gundy took over, OSU is infamously 2-10 against their in-state rivals, but there have been some monsters in that stretch.

I don’t so much want to talk about which games were the best ones (it’s a short list!) but rather which were the biggest combined for both teams coming in. So take 2014, that was one of the greatest games in OSU school history, but it didn’t represent a whole lot of history coming into that day. OSU was a bad team trying to spoil a less bad team’s season. In 2008, the teams were loaded up, but OSU had no chance at the Big 12 title. So that was a big one but not among the biggest.

With that, let’s rank the 13 biggest Bedlam games of the Gundy era.

Four times in the last six years, this game has been for the Big 12 Championship, but only three times has the winner been able to say “if we win this game, we take the Big 12 crown.” This one ranks ahead of 2015 to me because of the Rudolph injury and ahead of 2011 because of the Ames debacle and because there would have been a weird three-way tie for first that year had OU won.

It’s weird to consider this now, but OU would have technically won the Big 12 that year despite losing to Texas Tech at home and Baylor on the road. It beat Kansas State which finished at 7-2, and had it beaten OSU in Stillwater, the Sooners would have been crowned (again).

It gets third billing of the three de facto Big 12 title games because Rudolph didn’t even start. Still, whenever the Big 12 trophy is in the house and Bob Bowlsby is on the property, you know you’ve got a Big Daddy tilt. Doubles as the Fu Manchu game.

Maybe the biggest game that felt the least important. Possibly because I’m not sure anyone could feel anything at all in that weather. Doubles as the second-most crushing defeat of the Mike Gundy era so that’s fun!

Just the second time in the Gundy era that both teams enter with one loss or fewer (2015 was the other). I can’t put it in the top four because there’s still so much season left to be played, but the year turns on this game for both teams. Win it, and you’re officially in the CFP conversation.

One of the great sometimes-lost games of the last decade. OU entered 9-2. Oklahoma State came in 10-1. The winner would go to the Big 12 Championship game. Landry Jones threw for 468 yards.

This one gets lost, too, but the two teams came in a combined 19-3. OSU was No. 11. OU was No. 3. It didn’t matter as much for the Big 12 title race for the Pokes because OSU had already lost to No. 1 Texas and No. 2 Texas Tech. OSU went 9-3 that year and finished fourth (!) in the South Division of the Big 12. It did matter for OU, though. They went on to play Florida for the national championship.

It was big because they’re all big, but Oklahoma State came in with a 7-3 record with no real chance at the league title. Bonus from this game: OU hung a Big 12 Champs banner despite not winning the Big 12. They tied KSU (and lost to them) but still hung that banner.

OU needed this one to get to the Big 12 Championship game. It barely got it, too. On the arm of Paul Thompson!

OU did not need this to get to the Big 12 Championship game (it held a tiebreaker over Texas). Side note: I remember very little about this 2005-2007 stretch of Bedlams.

I hate this game. Texas had already sewn up everything that mattered, but Oklahoma State was the better team. And they got shut out 27-0.

The teams came in with a combined 9 (!) losses.