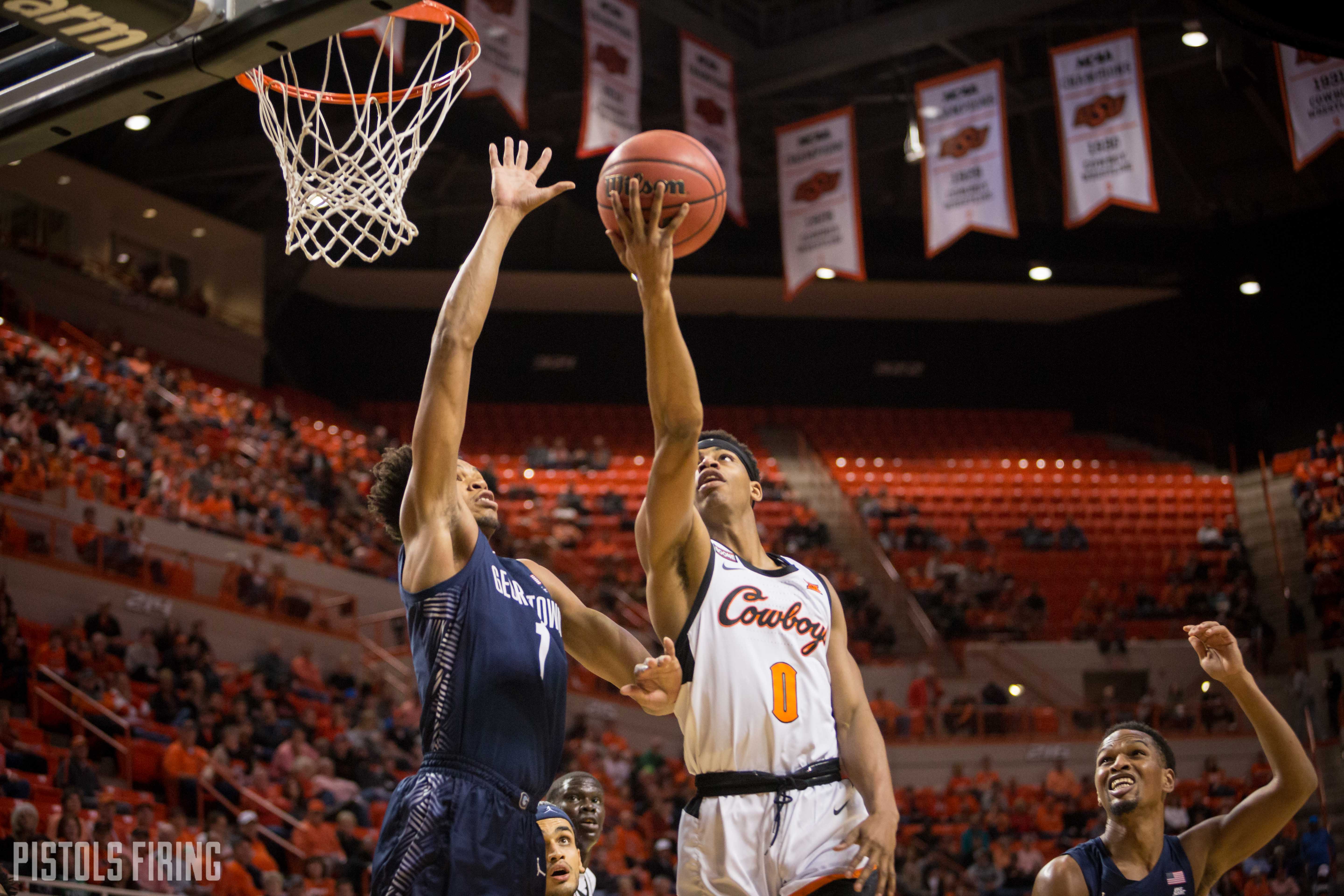 Oklahoma State fell to Georgetown 81-74 on Wednesday night in Gallagher-Iba Arena. The Cowboys’ undefeated start finished at 7-0. The change in the starting lineup saw freshman Chris Harris start in place for an ill Isaac Likekele. Entering Wednesday, Likekele had started every game of his college career. He led the Cowboys in scoring, assists and steals entering the night.

“I mean, he’s started every game of his career,” OSU coach Mike Boynton said. “He’s a really good player. At the end of the day, he was not available today. Gotta figure out a way to win.

“I’m not sure when I knew (OSU would be without Likekele). He’s sick, so you’re just kinda playing it by ear. When he feels better, when he’s capable of getting out there and giving us everything he has, then he’ll be back. But we still should’ve played better.”

McClung started hot and finished on fire. The Georgetown sophomore finished with 33 points after going into the break with 15 points. Points 28, 29 and 30 came off his fourth 3 of the night. After he hit the shot, he turned to the east side of GIA and stuck his tongue out at jeering fans, something he did a few times. 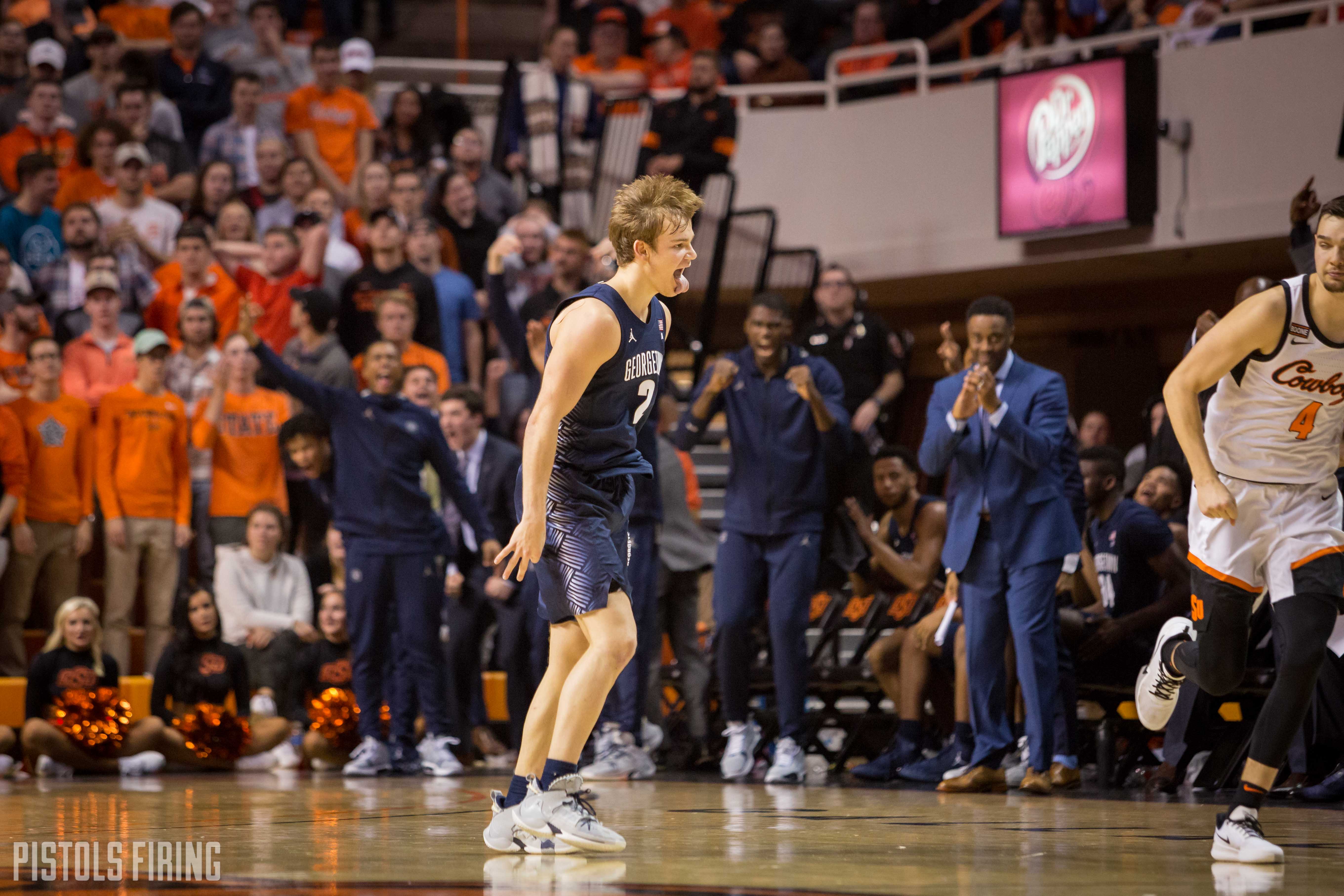 Already being without Likekele, the Pokes were also without star big man Yor Anei for much of the first half. The NIT Season Tip-Off MVP played just 3:41 in the first half after picking up a pair of early fouls.

Anei fouled out in the second half, only playing just 17 minutes where he had four points, no rebounds and two blocks.

“Down one guy, you can’t have virtual no-shows, and in some ways that’s what Yor was today,” Boynton said. “As good as he was last week, he played 18 minutes almost and got no rebounds. That’s pretty telltale for me, especially when you talk about how important it was coming into the game.

“But those things happen. Although he’s played a lot, he’s still learning himself. Tonight he got himself kind of playing like he was a freshman again for the first time since last year. It’s something I’m sure he’s conscious of, and I’m looking forward to getting him back in practice and seeing how he responds to it.”

The Cowboys were dominated on the glass, losing the rebounding battle 43-29.

Without their leading scorer, OSU’s captains shouldered the scoring load. Lindy Waters scored a career-high 29 points and did so off 50-percent shooting.

Cameron McGriff scored 20 points, the seventh time in his career he hit at least that mark. McGriff was a super-impressive 7-for-8 from the field, and after starting the year 3-for-18 from 3-point range, McGriff was 4-for-5 from deep Wednesday.

“I don’t think I’ve lost confidence,” McGriff said. “I’m going to still shoot it if I miss it until Coach tells me not to.”

A mix of McClung and Omer Yurtseven put the Cowboys away late. Yurtseven, a 7-foot center from Turkey, netted 13 points in the second half and finished with 19 total.

It’s been a rough week for the Hoyas. Georgetown lost starting point guard James Akinjo and Josh LeBlanc earlier this week after the pair entered the transfer portal.

LeBlanc and Georgetown forwards Galen Alexander and Myron Gardner also got in got in some legal trouble this week, as it was announced that protective orders were filed against them.

This was the first time OSU’s five freshmen who have played this year have lost a game. They’ll get their first chance to respond Sunday against Wichita State.

“My message is no different,” Boynton said. “The message is the same as it was after winning in Brooklyn last Friday. We’ll go back and we’ll spend quite a bit of time watching this, figure out why we didn’t rebound well enough. Was it something I didn’t emphasize? It always starts with me.

“It’s no different. It’s early. It’s December 4th. We’re preparing ourselves to continue to get better. We’re playing our best basketball later in the year.”