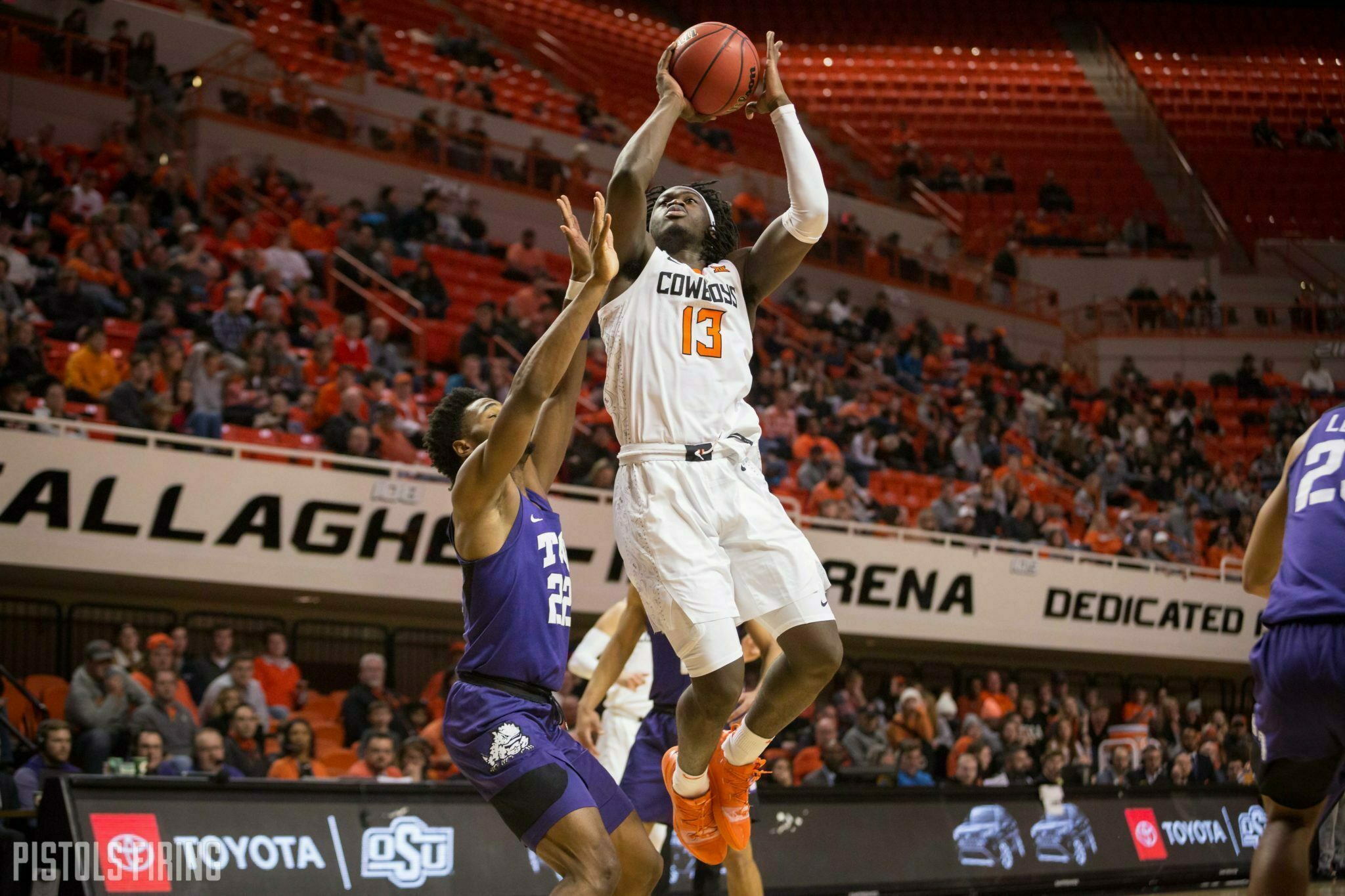 STILLWATER — The Cowboys will not have a winless conference season.

Oklahoma State was one of only 10 Division-I teams left in the country to have not won a conference game, but the Pokes defeated TCU 72-57 on Wednesday night in Gallagher-Iba Arena. It moves the Cowboys to 1-8 in Big 12 play this season.

“It feels good,” Thomas Dziagwa said. “It feels like we finally got a win in the win column. We worked for it. We also believe it’s the first domino of many. We felt like we just had to get one and hopefully it trickles off a couple.”

Isaac Likekele was the Cowboys’ maestro. OSU’s sophomore point guard had his first career double-double after he dished a career-high 11 assists to go with his 15 points. Seven of those dimes came in the first half. The prettiest assist he had on the night came late in the first half when he looked at Keylan Boone in the corner, but Likekele put the ball on a rope to Yor Anei under the basket for a dunk.

Likekele eclipsed 200 career assists Wednesday night, becoming the eighth player in program history to do so by the end of his sophomore season.

“I can’t really explain the feeling,” Likekele said. “I kinda just feel like it is what it is to me type of deal. I don’t play really just for my stats, I’m just glad that we came out here and got the win today. That’s what makes me feel really good.”

The Cowboys were running short on wing players Wednesday night. Lindy Waters’ absence was a game-time decision. He fractured a bone in his face in Saturday’s game against Oklahoma. Chris Harris started in Waters’ place, but with 14 minutes left in the first half, Harris was on Eddie Sutton Court clutching his left leg. Initially it looked like a knee injury, but it was called a lower leg injury at halftime.

Avery Anderson suited up but didn’t play. Boynton said he has a bruise on his lower back after a fall in practice.

With those three being out, Keylan Boone played the most minutes he’s played in a game since Jan. 15. But even he got banged up as he had his shoulder tugged on on a rebound attempt. He played the next defensive possession with his right arm funkily hanging before a timeout got him off the floor. He returned later in the half and finished the game with six points and four rebounds.

Likekele and Boone were tasked with keeping up with TCU star Desmond Bane. A 6-foot-6 guard, Bane entered the day averaging 16.3 points a game on 47-percent shooting. The Cowboys face-guarded Bane with Likekele and Boone for much of the game. That’s something that is expected of Likekele, but it was an impressive ask for Boone, a freshman.

“He’s got that ability,” OSU coach Mike Boynton said. “His greatest asset for us, regardless of the two 3s he made today, is his length and ability to be a disruptive defender. It’s a lot of the reason he was recruited here. He knows that. Because of his ability to defend multiple positions. He’s got a lot of pride on the defensive end.”

Bane still scrapped his way up to 14 points, but he did so on 15 shots in his 38 minutes on the floor.

Boynton name walk-on Dee Mitchell as the game’s MVP. The injuries sprung Mitchell into action. He hasn’t played since getting in for 56 seconds against Texas A&M. He played a career-high 18 minutes Wednesday. Despite not shooting a shot, Mitchell ended the contest a game-best plus-18.

“We were 18 points better than TCU when he was on the court,” Boynton said. “For a guy to not take a shot and have that type of number, it’s pretty unusual. But it goes to his character, a kid who is truly committed to what we believe in.”

The Cowboys don’t get much of a reward for their first Big 12 win. They travel to No. 1 Baylor on Saturday. Throughout the year, the team has used a metaphor to keep chopping wood. Boytnon said the tree isn’t down yet, but it can be soon.”