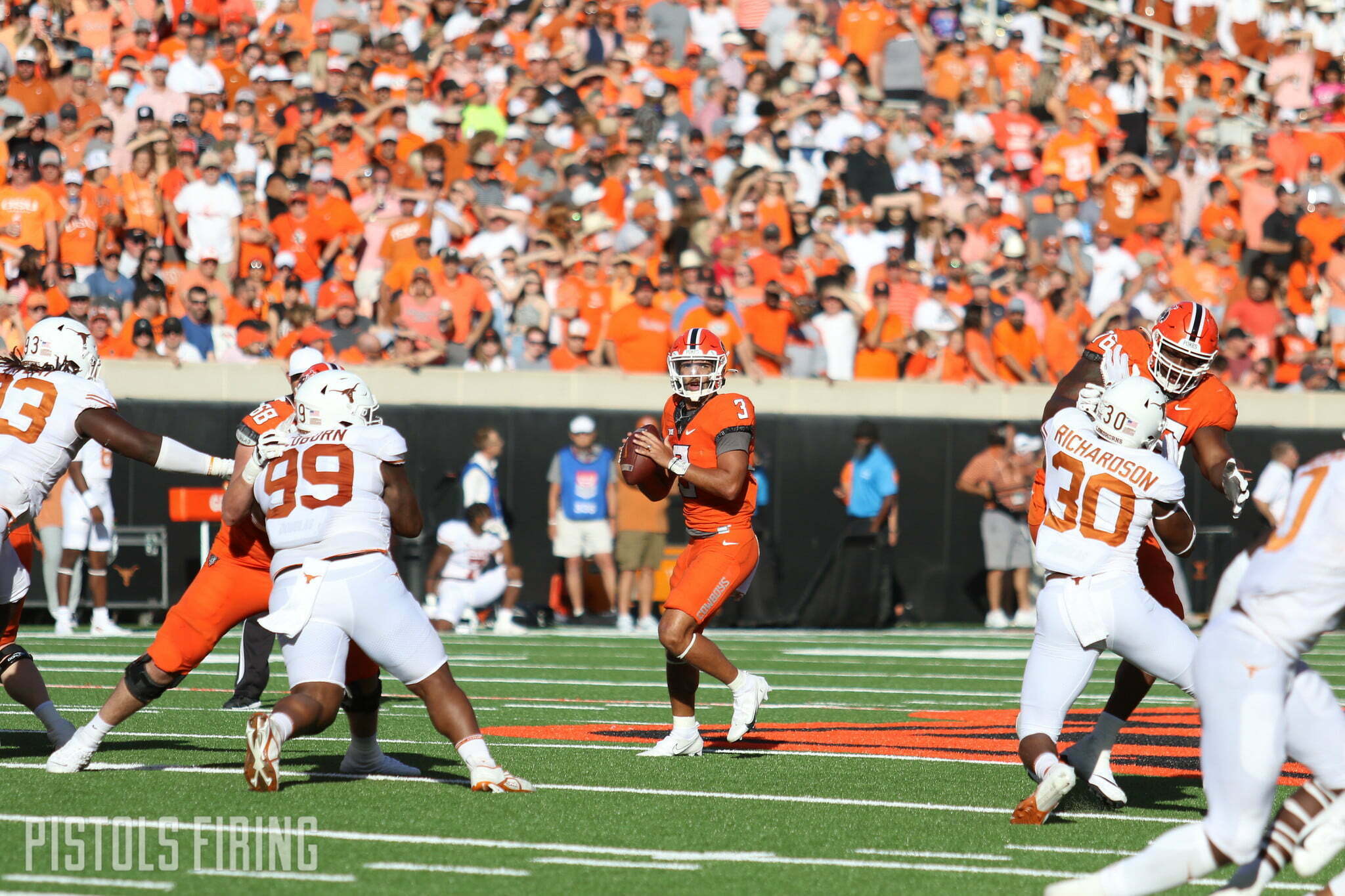 A week after the Cowboys gave up a three-score lead to lose at TCU, they came back from a 14-point deficit at home to top Texas.

No. 11 Oklahoma State defeated No. 20 Texas, 41-34 after holding the Longhorns to just three second-half points. The Cowboys move to 6-1 on the season and 3-1 in Big 12 play to keep their conference title hopes alive.

The Longhorns made the majority of the big plays in the first half. Bijan Robinson helped UT out-rush OSU 161-108 in the first half, checking up 92 yards of BPS turf and scoring two total touchdowns including a 41-yard catch-and-run. But Derek Mason went into the lab, a la Jim Knowles at halftime and the Cowboys clamped down on the Longhorns. Robinson only gained 48 more yards combined over the final two quarters.

The Cowboys’ defense held Ewers to a career-worst 39 percent on passes (19-of-49) for 319 yards and two touchdowns. In five appearances on the season, Ewers totaled just two picks coming in. He threw three in Stillwater. OSU’s defense continues its dominance on third downs, holding Texas to just three conversions on 17 attempts.

Jason Taylor bookended the day with two of Quinn Ewers’ three interceptions. Taylor stepped in front of the freshman’s second pass attempt on the opening drive. Taylor would reel in Ewers’ second interception late in the fourth quarter but appeared to go down awkwardly on his knee and had to be helped off the field.

The Cowboys out-gained the Longhorns 535-523 with Spencer Sanders doing most of his damage through the air. Despite dwindling depth at receiver, Sanders spread the ball around and leaned on some young targets, and they made some big plays.

Bryson Green led all receivers with 133 yards on five catches. He caught the 41-yard touchdown that would end up being the game-winner with 3:09 left.

With both Braydon Johnson and Jaden Bray out, Stephon Johnson Jr. had a coming-out party. The true freshman had just five catches on the season before Homecoming but grabbed six for 90 yards on Saturday. John Paul Richardson also caught seven for 63 yards. Sanders threw passes to eight different OSU receivers.

Jaden Nixon led the Cowboys with 64 rushing yards on eight attempts. Sanders added 43 on 11. Dominic Richardson started the game and scored three rushing touchdowns in the first half, but only took three handoffs and was done early in the third quarter. No word on his status as of writing.

The first half was full of big plays and points, but neither team found the end zone in the third quarter with each team kicking a field goal. But Oklahoma State tied it at 34-34 with 9:54 left in the fourth quarter on a 10-yard connection between Sanders and Brennan Presley.

The Longhorns took finally appeared the get something going when in the second half but couldn’t finish the drive. UT took possession, tied at 34 with eight minutes left. After picking up 50 yards,

Those penalties will no doubt be a talking point for Texas fans. The Longhorns were flagged 14 times for 119 yards while the Cowboys weren’t penalized once. That will be low-hanging fruit for anyone interested in the home-cooking angle, but the majority of those were not judgment calls by the officials. UT had five false starts and three offside penalties.

Texas would get one more shot to tie it. Thanks to a rare poor punt by Tom Hutton, UT got the ball back at the OSU 38 with 60 seconds left. But that drive would end just like the previous one.

OSU did get the short end of the review stick. A called muffed punt by Brennan Presley was not overturned and another huge catch by Johnson wasn’t either after long reviews. Neither clip was indisputable but both looked like the call on the field was wrong.

Next up, the Cowboys are back on the road next week with a trip to Kansas State.