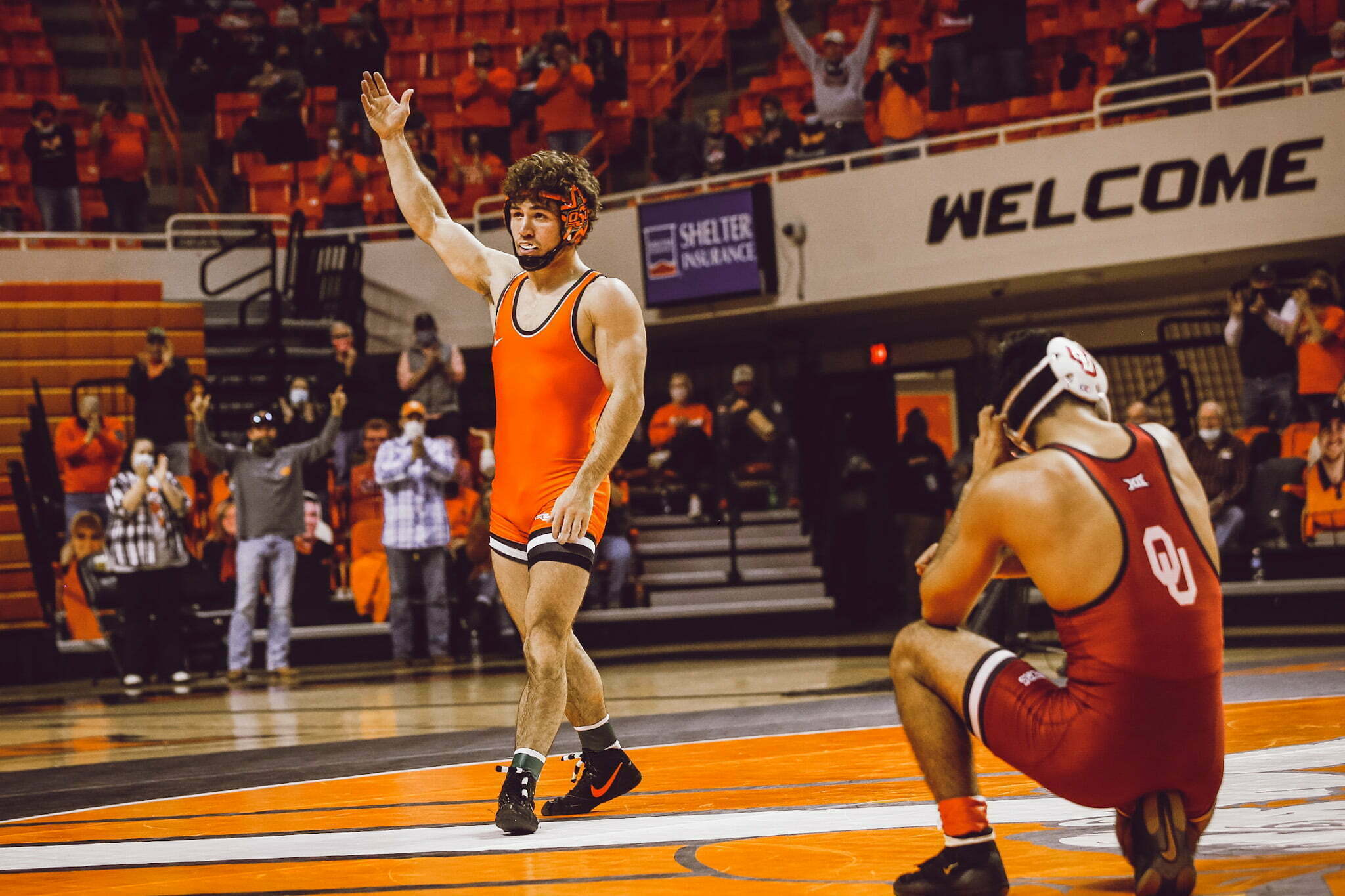 Make it a baker’s dozen in a row for the Cowboys against their rival Sooners.

AJ Ferrari picked up a third-period takedown to beat Oklahoma’s Jake Woodley and secure the dual another for the Cowboys, who went onto win 24-16 in the season’s second Bedlam.

With the match tied at 1 in the third period, Ferrari shot in and grabbed Woodley’s left leg. Ferrari worked the takedown attempt for nearly 20 seconds before getting it. He was able to ride out the remainder of the period and beat Woodley 4-1.

“He didn’t wait for the last takedown, he went and got it early in the period rather than taking it down, it’s 1-1 or whatever the case is,” OSU coach John Smith said. “He chose to separate the score early in the in the third period which was mature, real mature.”

Daton Fix’s return to dual competition went seamlessly. Fix pinned Tony Madrigal in the second period of their match. Fix is up to 5-0 this season with four of his wins coming via fall and the other being a tech fall.

“When you have that freedom over a year, you get to think about where you’re at, what you’re done,” Smith said. “You’re not in a rush anymore, and I think that he’s been able to develop some skills beyond what he was doing.”

There was a chance Fix wrestled up a weight at 141 to face No. 6 Dom Demas. With Kaid Brock and Dusty Hone injured, Smith had a decision to make at 141, and he said Fix was a possibility. But Smith ended up going with freshman Jakason Burks, who normally wrestles at 125 pounds.

Burks trailed 6-3 in the third period, and it looked as if OSU was going to get out of that weight with minimal damage before Demas rolled Burks from his feet to his back to pick up a third-period fall.

“I didn’t tell him that until today,” Smith said. “I had him in the back of my mind all week who I was gonna wrestle 41. We were flip-flopping between Fix and Reece Witcraft and, of course, Jakason.”

Troy Mantanona might check under his bed at night for Travis Wittlake. Wittlake dominated Mantanona to a 26-11 technical fall. In the last Bedlam dual, Wittlake beat him 27-11, meaning that in two matches, Wittlake has scored 53 points on Mantanona.

The Cowboys now have two weeks to heal before the Big 12 Championships, which are set to start March 6 in Tulsa.

“We got a lot of different individuals at different places right now, so with that, we’ll kind of gear towards individual performance and what they need, rather than so much team,” Smith said. “When I watched this team today, I’m going, ‘We are better than that, and we can get better.’ I don’t believe we had a poor dual meet, but I see so much more right now out of this team.”