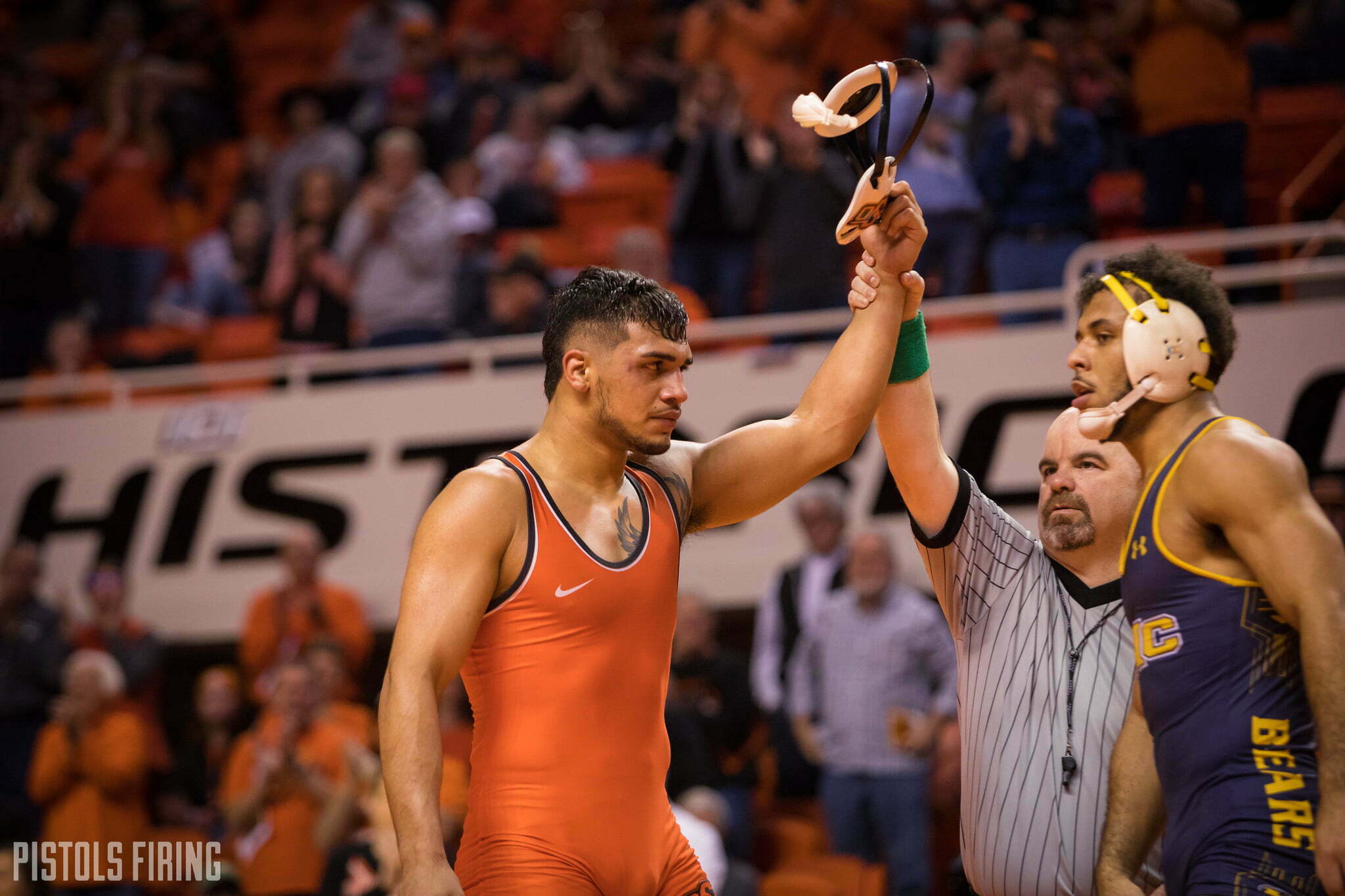 STILLWATER — At every weight but two the Cowboys might have been better off having an intrasquad dual.

The Oklahoma State wrestling team defeated West Virginia 37-9 on Friday night in Gallagher-Iba Arena with the only one ranked match, coming at 197. That bout saw No. 11 Dakota Geer face off against No. 2 Noah Adams.

That one didn’t go well for OSU as Adams pinned Geer in 1:07. Geer fought off Adams’ takedown attempt for as long as he could, but in the end of it, Geer found himself in a compromising position — on his back.

“In the 97-pound match, you just need to recognize where you’re at,” OSU coach John Smith said. “There’s a time where you just give up the takedown because you’re not in very good position and wrestle the next six and a half minutes. Stayed with the scramble just a little bit too long.

“I don’t need to say a whole lot to Geer. He’ll take it personally and probably go to work tonight.”

Despite Geer’s loss, the 37 team points OSU scored were the most since the Cowboys’ 39-0 victory against Air Force last February.

The night started with back-to-back technical falls. It took Nick Piccininni just one period to beat Joey Thomas 18-0. Then at 133, Reece Witcraft beat Lucas Seibert 17-1. A match later, Boo Lewallen pinned Liam Lusher in 1:10. Anothony Montalvo also picked up a pin in 2:30 at 184.

In the match introductions before the dual started, Montalvo had a cold stare at his opponent Jackson Moomau as the two shook hands. Montalvo scored an early takedown to start the match and followed it up with a four-point nearfall where he nearly pinned Moomau before sticking his shoulders to the mat for good.

“I think I’m a nice guy,” Montalvo said. “On the mat I like to be mean, though. My dad always told me since I was small, ‘Flip that switch.’ Off the mat, I’m all smiles, I’m all loving, and on the mat, I want to fight you, I want to take your head off.”

In total, seven matches ended in bonus-point victories for the Cowboys. The dual was mathematically over after Travis Wittlake’s victory at 165 — meaning West Virginia could’ve had four consecutive pins and still lost.

Cornelius Putnam wrestled his first match of the season in the final match of the night. Putnam’s 0-0 record entering turned into 0-1. He and Brandon Ngati went to overtime tied at 1, but Ngati scored a takedown late in the first overtime period to win via sudden victory.

The Cowboys have about 22 hours of rest before rolling the mats back out Saturday night as OSU hosts Pitt at 7 p.m.