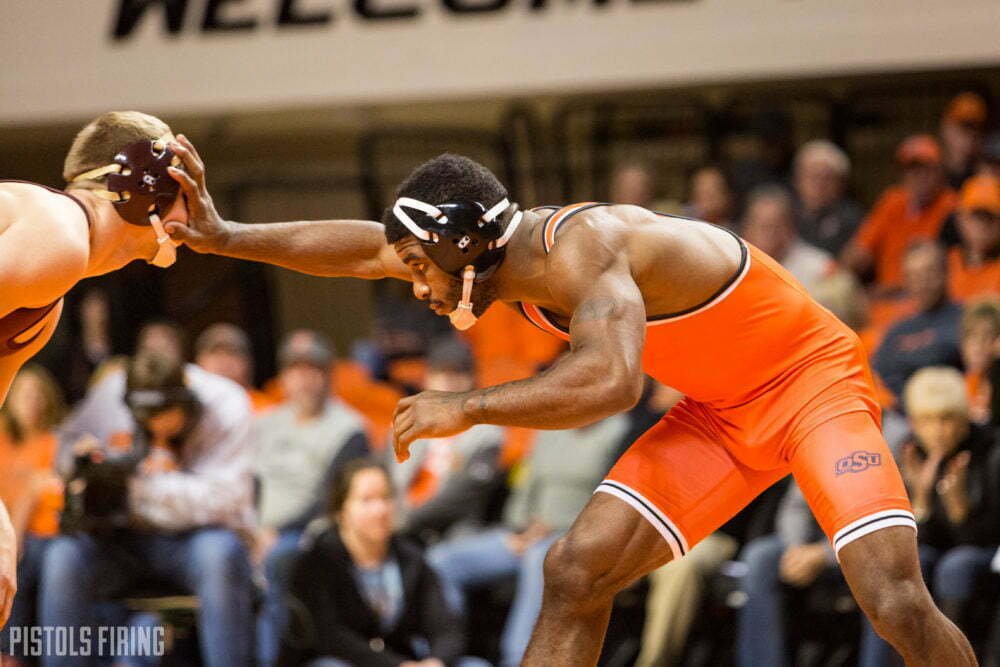 The No. 3-ranked Oklahoma State Cowboys concluded their trip to Italy taking out 5th-ranked NC State 19-16 in a dual featuring top 5 teams that came down to the last match.

It’s been an interesting shift for OSU where the upper weights seem to be the guys that are holding on to win the close duals this year. Historically that really hasn’t been the case so it is great to see the big guys doing that now.

In pretty much every match OSU won they looked solid. NC State didn’t have any major weak spots so OSU was “favored” in a lot but nothing was a given.

Preston Weigel at 197 was probably the most impressive to me. He wrestled a really tough kid and despite a moment at the end of the match where he relaxed and almost gave up an escape/reversal and one take-down he gave up early, he looked really solid.

Everyone knows Weigel’s incredible on top but he hit two great low singles. One he scored on and the other he easily could’ve finished the shot but ran out of time. If he can just start opening up and pulling the trigger on those shots he can take people down. He proved it today.

Derek White-HWT, Kaid Brock-133, and Chandler Rogers-165 picking up their bonus ended up being the difference in the match. Brock was quite a bit better than the guy he wrestled on paper but what he doesn’t usually pick up back points like he did here and that was good to see.

White continues to impress. He wrestles like a guy at 149 and he’s a HWT. The HWT for NC State is no slouch. His backup made the finals of the Southern Scuffle so for White to pick up a major there was good to see.

Chandler hit a throw early where I thought he might pull off a fall but continuing to score and pick up the major was all he really needed to do to set up Smith for the match to win.

Chandler Rogers with a 13-1 major and Oklahoma State ties the dual at 16 heading into the final match. pic.twitter.com/c19JgX8lyA

Jacobe Smith-174 was tasked with closing out the dual and did a good job of it. He was favored, but that’s a pressure situation. I think Smith is settling into a bit of a groove as a D-I starter and is wrestling well now. Took some lumps early this season but he looked solid today.

Dean Heil-141 had won 55 straight prior to his last match but has dropped two straight for the first time since his freshman year. He and Kevin Jack were ranked Nos. 1 and 2 earlier in the year. Heil had the advantage most of the match but gave up a TD late to drop the match.

Boo Lewallen-141 Lewallen’s debut as the starter didn’t go the way he wanted it to. He had way more offense early in the match than the other guy but just got in on shots and couldn’t do much to finish. He seemed to sorta gas himself out and eventually lost in OT. I wonder if the flu bug that Fix had at the Southern Scuffle wasn’t still a little bit of a factor with some of these guys.

Donahue with a takedown in OT and NC State ties the dual at 12 heading into 157. pic.twitter.com/XAlVVHbE6O

Nick Piccinnini-125 dropped one to 8th-ranked Sean Fauz of NC State. Nick got in on shots easy with Fauz but Fauz used his length to defend Pic’s shots and counter to score. The end result wasn’t what Nick wanted but from the outside looking in, the areas Fauz was able to score on look like things they can work on in the room and Pic could avoid if they ever meet up again. He gave up two TDs early but still got back in it late and nearly pulled off the comeback.

Jonce Blaylock and Keegan Moore were a little outgunned in their matches. They lost to better wrestlers but didn’t give up much bonus which ended up being the difference in the match, so you can’t be too upset with their performance.

Next up, the biggest rivalry in the sport is renewed on January 14 with OSU heading o Iowa City to take on Iowa. Stayed tuned with PFB, we’ll get you ready.