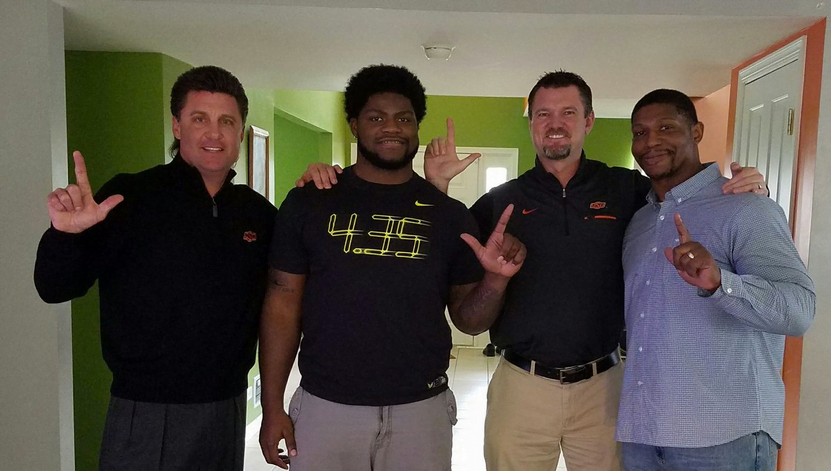 The Reload is PFB’s recruiting recap catching you up to speed with everything you need to know with an ear to the ground for what to expect.

Life after Vincent Taylor should go over well for Oklahoma State, thanks to great planning and recruiting from defensive line coach Joe Bob Clements. Before Taylor’s decision, Oklahoma State secured a commitment from 2017 defensive tackle Enoch Smith Jr., a former Michigan State defensive tackle who could come in and play right away. Mike Gundy and Joe Bob Clements made a visit to his house earlier this week.

Great home visit from my new coaching staff! Great things in store for the future. I'm excited and grateful to be a Cowboy #GoPokes ??⚫⚪ pic.twitter.com/xpCojz0oXO

Smith is expected to take his official visit to Stillwater on Jan. 27, before putting pen to paper on Feb. 1 for national signing day.

The safety position is loaded with so much talent in the 2017 class, there’s a chance one or more could slide over to play cornerback for Oklahoma State. That’s because cornerback is a position desperately in need of a boost in depth.

Norwood is a late bloomer in recruiting circles, but he’s blown up nationally after decommitting from Louisville last week with offers from Oklahoma, Oklahoma State and Notre Dame. Right now, his only scheduled official visits include OU and Notre Dame.

Another cornerback in the mix for a spot is 2017 recruit Amik Robertson. The 5-foot-9 recruit is a former Louisiana Tech commitment but is getting late interest from OSU and in-state school LSU. According to 247sports, he will take an official visit to Stillwater this weekend.

Now with just one commitment at offensive line in the 2017 class, coaches will (and already have) hit the reset button. More on that in the coming hours.

Offensive coordinator Mike Yurcich had his eyes set on the NFL playoffs this weekend, but his thoughts were elsewhere. After seeing some misdirection he had to hit up his man Tracin Wallace, a dual-threat quarterback from Fort Worth — and brother to twin four-star receiver Tylan Wallace who is also committed to OSU.

Watching all this misdirection on ?and had the itch to ? 2⃣0⃣1⃣7⃣ Dual Machine from the 8⃣1⃣7⃣. #snowday? got the boys thinking fall!! ?? pic.twitter.com/rfouFZzhW9