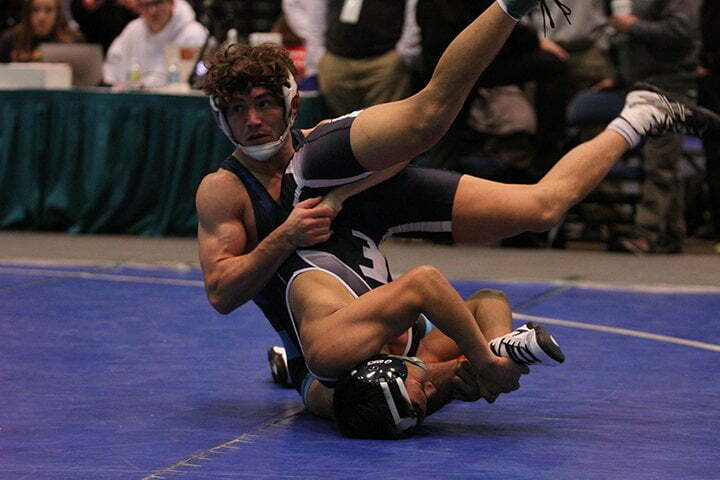 The talk of the tournament — not just for OSU fans but for most of the wrestling world — was World Champion and the top recruit of the 2017 class Daton Fix making his college debut in Reno this weekend.

Fix didn’t let anyone down in regards to the excitement around his debut. He opened up with two quick tech’s and a 14-point quarterfinal win.

In the semi’s, Fix finally started to see competition that could actually hang with him as he took on 9th-ranked Ronnie Bresser of Oregon State. Bresser worked an interesting strategy with Fix on his feet.

Fix is pretty aggressive and as he constantly worked in to get to ties. Bresser stood up, out of a stance, circling backwards toward the edge to avoid allowing Fix to get into tie ups. With what Bresser was doing it looked like he would eventually get hit for stalling, but any time Fix pressured, Bresser would make some pretty impressive level changes and drop in and get in on shots. He was never able to finish anything, but it kept Fix honest and kept him from working his usual offense.

In our preview, I said to watch out for his mat wrestling. In this match he needed it to win and he had it. He had about a minute and a half ride time in the third to secure the riding time point and win the match. That’s a very good sign. He didn’t look like he’ll be some hammer that picks up a lot of falls, but it does look like he can hang on and ride if he needs it to win a match.

In the final match Fix matched up with 8th-ranked Sean Fausz out of NC State. The majority of the match was fairly even on their feet. Fix looked a lot better than Fauz but he wasn’t able to produce any points so Fausz went into the 3rd with a 1-0 lead off an escape point in the second. Fix made a really aggressive move by taking neutral and basically betting on himself to get a takedown to win. It worked and Fix got a last second takedown to win the match and tournament.

Daton Fix picks up a takedown with 10 seconds to go to beat Sean Fausz, 2-1. pic.twitter.com/m5G8s7pYoi

There was some good wrestling by a number of Cowboys but the three other weights to watch out for were 141, 149, and 157.

I continue to like what I see out of Kaden Gfeller at 141. He finished 4th with losses to two top 5 guys. He looked good, though. He’s a little behind that caliber of wrestler at this point in his redshirt freshman year. Continuing to work in the room with the best group of 125-149 in the country will help Gfeller get there before too long.

The scramble to get this takedown was incredible. Looks like he’s learned a bit from Dean Heil in the room.

At 149, Boo Lewallen finished 3rd. He worked his way to the semi’s pretty easily where he matched up with NCAA Champion and eventual tournament winner Jason Tsirtsis. Tsirtsis got a takedown in the 3rd that ended up the difference in the match and gave Boo his first loss of the season. This was one that easily could have went either way. Lewallen nearly had a takedown on the edge in the 1st that fired up the OSU coaching staff a bit when the refs didn’t call it. He came back pretty easily and got 3rd winning 12-8 over Dean Heil’s brother Josh, who wrestles for Campbell.

Marsden had a solid tournament at 197 wrestling to his seed and finishing 5th. He has already started his cut down to 184 and was undersized for this one. So going 5-1 on the weekend and making the podium is good to bolster his resume to get a Big 12 seed and have a good shot to qualify at 84 if he gets the starting nod.