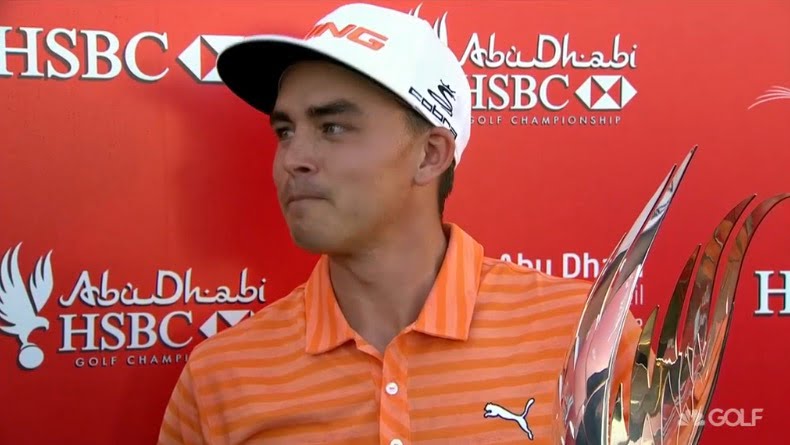 There’s a new world order in golf. Rickie Fowler has risen another spot to No. 4 which means the top four in the Official World Golf Rankings looks like this:

At 28, Day is the oldest of the four. Is golf  fun right now? Golf is fun right now. To get to the No. 4 slot, Fowler had to take down Rory McIlroy, Jordan Spieth and a host of others in the Abu Dhabi Golf Championship on Sunday.

Let’s ignore for a minute the fact that Fowler likely got more money in appearance fees just to show up than he did for winning, and concentrate on the strength of this field. It contained four of the world’s top six players and is one of the stronger European events of the early part of the season.

Anyway, Fowler bested everyone on Sunday before toasting the media tent with another onslaught of champagne. But he actually had a bumpy final round. He made double bogey on his 7th hole before rebounding with an eagle on the very next one to regain his position atop the leaderboard.

Then McIlroy threw a haymaker at him by making an unlikely eagle on the final hole (his second in three rounds on that hole, by the way) to get within one. Fowler responded immediately however by chipping in on the 17th hole to go back up two and secure the victory.

The man with four majors agrees.

Big congrats to my good buddy @RickieFowler yesterday. Great to be a part of this generation traveling the world and playing great golf! ?⛳️

“It’s a great way to start,” he said. “Nice to have the game where it’s at right now going into the season, instead of trying to work on things and trying to find stuff. Right now, I can go and fine tune and really build ultimately for Augusta. I’d say this is really the first time I’ve had it, of my career, at this — how good I feel about my game and know where it’s at.

“I’m excited. There’s definitely some fine-tuning that we can do and we can always get better. I know all the players out here are always trying to get better, and that’s the goal moving forward, to be ready for Augusta.”

He might be ready for Augusta. I’m not sure Augusta is ready for its first-ever set of jogging golf pants and high-top spikes.

If my research is correct, @RickieFowler made history today by recording the first pro win in joggers and high tops pic.twitter.com/IuFRc0E0fO