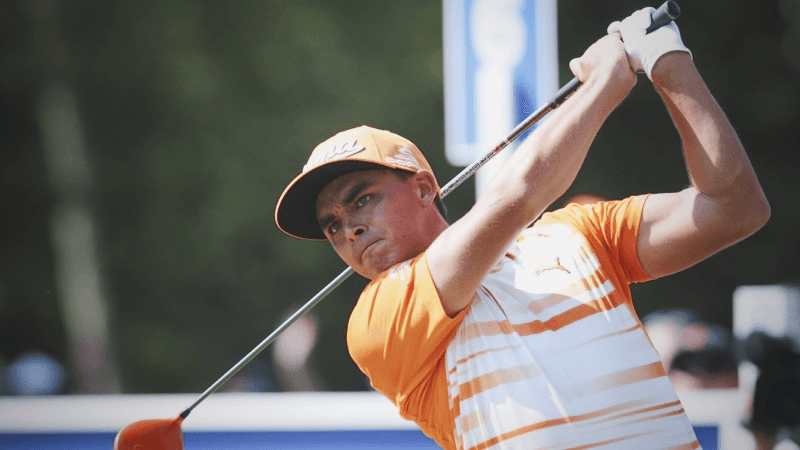 Guys, do we have room for a fourth?

Rickie Fowler still has a long way to go to make this modern day Big Three a Big Four (like, say, winning a major) but three wins worldwide in 2015 is no joke. In May, Fowler won the Players Championship with a staggering blast of birdies at the very end.

Then in July, he took the Scottish Open which is basically the middle class man’s British Open. On Monday, he took Boston and the second event of the FedEx Cup Playoffs, the Deutsche Bank Championship.

Fowler won by one stroke over Henrik Stenson by firing a final-round 68 which included over 110 feet of putts made. The big boy putt came at the 14th hole. A 38-footer to get him within one.

Stenson would relinquish the lead a few holes later with a double bogey after hitting it into the drink on a par 3. Fowler hit a 341-yard drive on the final hole (shades of the Players Championship there) en route to his first-ever playoff victory.

Fowler's caddie's got it easy. Between the golf bag, and Rickie's stones, Joe is carrying the lighter load.

Fowler spoke afterward with NBC of completing an absolute grind (he duck hooked his first drive on Monday into the woods and made par). He made two birdies on the back nine and parred the rest. It was less an attack than it was a defense.

Then he bought everyone in the media tent champagne.

Lastly, he addressed that incredibly tired narrative of being overrated. I wouldn’t even bring this up except for the fact that this is quite the quote.

It’s a big win for Fowler that’s sort of hidden by the fact that it came on a. Labor Day and b. opening weekend for college football. It won’t get the attention of the Players Championship, but Monday was an important final round for Fowler who enters a new world top five:

That’s a group of golfers, friends. And it’s young foursome with staying power. Only Watson is older than 27.

If this year is any indication, with Spieth, Rory, Day and Fowler combining for 14 wins worldwide, then golf is going to be a pretty great show for the next several years.