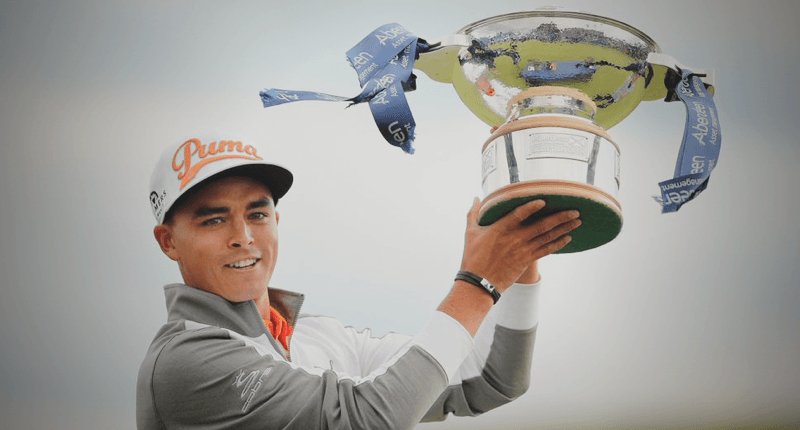 Rickie Fowler is an absolute menace on the links. Fowler won the Scottish Open at the Gullane Golf Club off the Firth of Forth on Sunday with a final-round 68 that included birdies at three of the final four holes.

Fowler’s last-minute birdie barrage was the cap on what was a pretty special week for the former O-Stater. The 3 he made on the 72nd hole of the tournament was devastating. He pumped one about 340 between a pair of pothole bunkers and hit his wedge to a foot.

Kick in, raise the trophy. Here’s Kuchar losing his mind (turn the sound up).

It was his first lead of the tournament.

Nothing like taking your first lead of the tournament with your final stroke. And winning. @RickieFowler wins Scottish Open at Gullane

“I saved my best swings until last,” said Fowler after the win. “I hit a great drive and a great wedge and managed to get it to 12 under par. Winning in Scotland is really special.”

It is. Now Fowler will take a top-five ranking to the Old Course at St. Andrews next week and try to pull off the Scottish Open-Open Championship double like Phil Mickelson did just two years ago.

Fowler is now a 16-1 favorite to win at the Old Course. If his last three performances across the pond (2014 Open, 2014 Ryder Cup and today) are any indication, that’s way too high.

I’ve always said if Fowler wins a major, it will be at the Open Championship. He’s got a great low trajectory with his irons and can summon creativity when he needs it. Most importantly, he’s never affected by anything. That matters when the wind pipes off the North Sea and the draws aren’t what you hoped for.

“Phil [Mickelson] mentioned to me win this and there’s a good chance you win next week so I had to take care of business,” said Fowler.

“I don’t know what’s so special about links golf but it’s my favorite. The golf course can play so different day after day and it presents a new challenge. It was a good test this week at Gullane.”

Will it be this year for Little Rickie at St. Andrews? It certainly wouldn’t surprise me. But he’ll have to bring everything he’s got to stop the S.S. Spieth. Wouldn’t an all-American duel between those two cats down the stretch at about this time next Sunday be lovely?