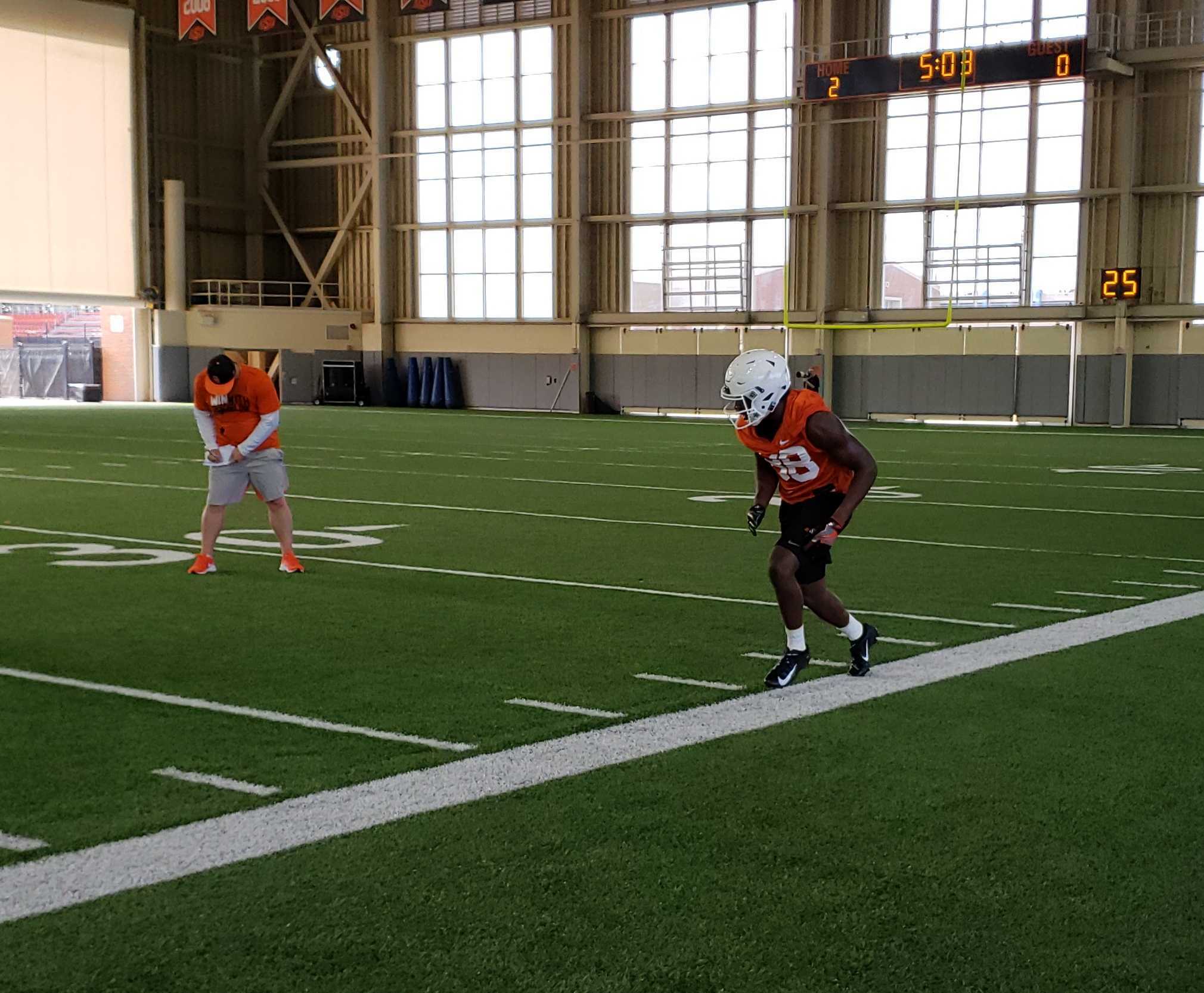 I’ve been the conductor on the Langston Anderson hype train in the PFB Slack.

The media was able to watch the first 20 minutes of three practices early in fall camp, and I had to look at the roster a few times to make sure who I was looking at was actually a freshman.

As good as Anderson looked, Oklahoma State receivers coach Kasey Dunn has accumulated quite the embarrassment of riches at the position, so it’ll be interesting to see how much Anderson will be able to get on the field in 2019.

Langston Anderson was the third highest rated recruit in OSU’s 2019 class. A four-star prospect, Anderson was the 37th-ranked receiver in his class, and he was ranked 32nd of all Texan recruits.

Anderson brought in 127 passes for 2,141 yards and 27 touchdowns in his final two seasons of high school. He chose OSU over offers from Ole Miss, Auburn, Texas, Arizona, Arizona State, Nebraska, Missouri and a whole lot of other programs.

In the long term, I think Anderson has a high ceiling, but it’s going to be tough this season to break into Kasey Dunn’s group.

Anderson’s body reminds me a lot of James Washington (heavy breathing). He’s has a strong, athletic frame, and he is even majoring in agribusiness, as Washington did. I’m going to go ahead and pump the breaks on Anderson’s freshman season being similar to Washington’s, again because of how deep OSU is at receiver this year. Washington led the Cowboys in receiving touchdowns as a freshman, I doubt Anderson does that.

But in the long term, I think Anderson has the potential to be a Washington-like target for Spencer Sanders/Brendan Costello/Shane Illingworth/Gunnar Gundy.

Based off the short looks at practice I got to watch, I think Anderson came in about as college ready body-wise as possible, so I think he’ll get a few snaps this season. Will he play enough to escape a redshirt? I don’t know.

A Tylan Wallace-like freshman season would be great for Anderson.

In 2017, OSU had pros to the likes of James Washington, Marcell Ateman, Chris Lacy and Tyron Johnson on it’s roster (in hindsight, holy crap). The Pokes also had Dillon Stoner and Jalen McCleskey bringing in balls ahead of Wallace, but even with all of those guys, Wallace played in every game and caught seven balls for 118 yards.

Now, putting Tylan Wallace-level expectations on anybody is probably ridiculous, but if Anderson could get seven catches as a freshman in the deep group of receivers OSU has, that would be a solid start.

One thing that will be interesting with Anderson is the four-game redshirt rule. With how deep OSU is at the position, Dunn might not need to play Anderson in every game. So, the temptation to redshirt him and possibly get an extra season out of him can be there. With that said, here is what Dunn said about playing Wallace as a freshman:

“There was no reason for Tylan Wallace to play with James Washington as the one, Tyron Johnson as the two, him as the three,” Dunn said. “Why play him? Well because he’s really good. And in a year, those guys are gone. You didn’t want him walking into the stadium big-eyed, mouth wide open going, ‘Oh my gosh. What have I gotten myself into?’ and have that learning curve (as a sophomore).

“Did it cost him a little bit in his freshman year? Probably. But at the same time, it got him ready for this past year, which is what we needed him for. It helped us.”

Wallace played in every game in 2017, but the four-game rule wasn’t a thing that year. So would it have been different had that rule been there? Another highly ranked receiver recruit, C.J. Moore did redshirt, but he was also physically behind from where he needed to be. Anderson is listed 17 pounds heavier than Moore on OSU’s roster, despite being four inches shorter. Anderson is one of the heavier receivers on the roster, and it isn’t baby weight; he’s kind of jacked.

So, based off the three 20-minute periods of practice I’ve gotten to watch, I’ve managed to bring up Langston Anderson in the same sentences as James Washington and Tylan Wallace. That’s not fair. There is a lot more that goes into it than simple wide receiver drills I got to see. How quickly will he be able to learn the playbook? How is his blocking? Things like that.

I think Anderson will get on the field in 2019. How many games and what games those are, we’ll have to wait and see.