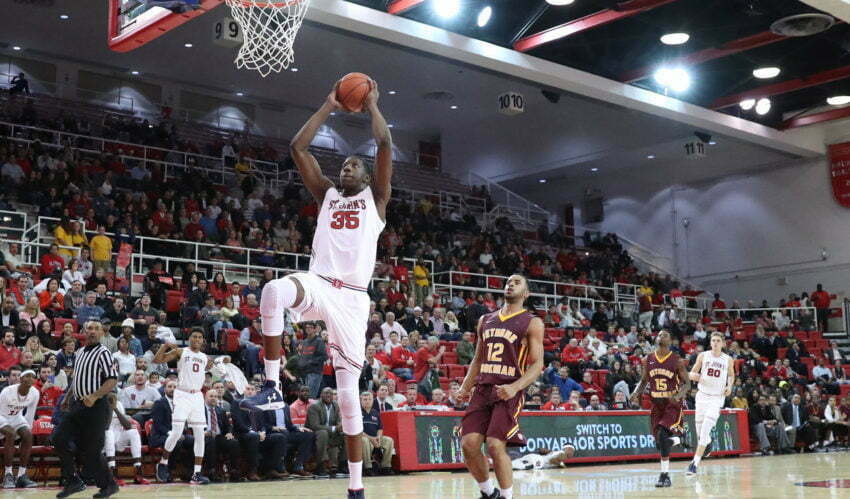 Oklahoma State boosted their 2017-18 basketball squad with the transfer of St. John’s center Yankuba Sima on Friday. The 6’11 transfer made it official on twitter.

Sima averaged 7.6 points per game and 5.9 rebounds per game with the Red Storm as a freshman, and finished 2nd in the Big East at 2.5 blocks per game. The rim protector’s 60 blocks total ranked ninth all-time in St. John’s history. This season, however, Sima began to lose playing time to Tariq Owens this year, averaging just 18 minutes a game. Additionally, 2017 four-star center Zach Brown was due to arrive at St. John’s next season.

However … if Sima is Chris Mullin and St. John’s trash, he could be Oklahoma State’s treasure. At 6’11 and 225 lbs., Sima brings legitimate size to what’s already expected to be a deep and talented front court in Stillwater in 2017-18 (Sima won’t be eligible until the spring semester in 2018).

When was the last time we said that about a group of big men in Stillwater? Here are the projected Cowboy bigs.

Of all the bodies at Brad Underwood’s disposal, Sima appears to have the most potential. Let’s take a look at a few highlights from his time at St. John’s, courtesy of Marcos Fernandez of ScoutBasketball.

Sima is obviously blessed with great length and uses his significant size to bully smaller defenders around the basketball, backing them down. He shows a nice little baby hook a few times, with both the right and left hands. Sima also shows a nice little 8-10 foot jumper to keep opposing centers honest, but any further out he has lacked touch so far. I’d imagine Underwood and the assistants will have him working on that jumper from the elbow a lot the next year. He definitely has room for improvement on the offensive end, but there is potential there.

On the defensive end is where Sima appears to shine. His length disrupts his opponent’s shot, if he can’t get a piece of the ball. He can probably stand to gain 10-15 pounds before he becomes eligible in Jan. 2018, which will help him hold his ground in the paint. Additionally, Sima does show decent lateral movement and reasonably quick feet defending centers facing up. I don’t believe there is a defender on the roster that will affect more shots at the rim than Sima.

Huge get for the Cowboys and Brad Underwood. You can become a perennial NCAA tournament team with guards like Jawun Evans, Brandon Averette, Lindy Waters, Zack Dawson, and Amauri Hardy. But you can challenge the likes of Kansas and start talking about deep tournament runs with the likes of Yankuba Sima.

A huge knock on Travis Ford teams (one of many) is his inability to bring talented big men, and then develop them. Lucas N’Guessan has already gone from an unrated, 215 lb. freshman from the Netherlands who arrived late to campus to a growing starting center heading into conference play. Dare I say it, Mitch Solomon has made strides of late this season (at least in rebounding). Cameron McGriff may hit the glass harder than anyone else in the Big 12 this year and would probably try to dunk on LeBron if given the opportunity.

But Souleymane Diakite, Latravian Glover, and especially Yankuba Sima are a different level of talent from N’Guessan/Solomon, and one can expect Underwood and Co. to develop the Johnnies’ transfer center into a force in the Big 12. Surround him with Jawun (fingers crossed), Jeff Carroll, and the rest of the nasty 2017 class coming to Stillwater, to go with this year’s uber-confident and ever-evolving freshman class? The Cowboys could be ready to challenge for a Big 12 title as soon as next season.