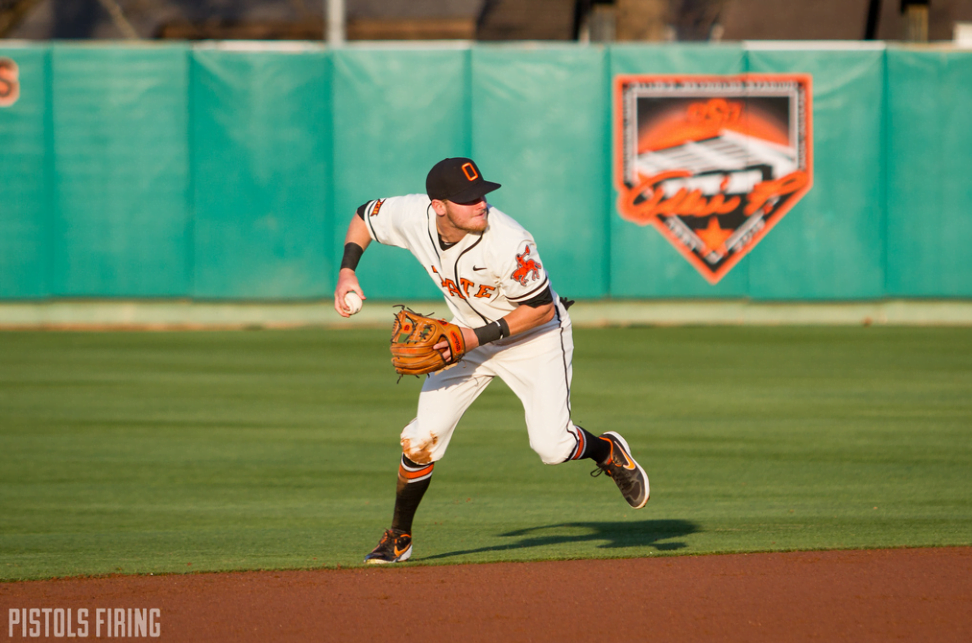 The cardiac Cowboys are back again.

The Oklahoma State baseball team defeated TCU 9-8 on Sunday in Fort Worth to win the teams’ Big 12 series. It was the Cowboys’ second one-run victory in as many days after the Cowboys dropped the series opener 7-4 on Friday.

TCU entered the series ranked 19th in the country and as one of the favorites in the Big 12 after beating Texas in a three-game series last weekend. OSU (18-8 overall, 5-1 Big 12) was just outside of many national rankings this week, but after an impressive performance against TCU following beating a ranked Oklahoma team midweek, that’ll likely change.

The Cowboys advance to 5-1 in series this season, with their only loss coming against Iowa at the beginning of March. Here’s a recap of OSU’s most recent series win.

In the top of the ninth with the bases loaded in a tie game, Carson McCusker hit a two-out, two-RBI single up the right side.

The Cowboys’ work wasn’t done there, though, as in the bottom of the inning Ben Leeper threw a wild pitch with runners on the corners. Alex Isola scored on the play, bringing the Horned Frogs within a run. It was the first run Leeper has given up this season. In a bases-loaded jam with two-outs, Leeper got his final out after a force at third to send the Cowboys back to Stillwater victorious.

The teams were tied at 4 entering the fourth when Cade Cabbiness and Christian Funk scored off an error, giving the Cowboys a 6-4 lead. OSU added another run in the fifth when Trevor Boone put down a squeeze bunt that scored McCusker.

The Cowboys looked somewhat in the clear before TCU came back, scoring a run in the seventh and two in the eighth to set up the action-packed ninth.

Although Leeper gave up his first run Sunday, he picked up his fourth save of the season after being awarded his third victory of the year after Saturday’s game.

He hit one of the five homers the Cowboys had Saturday before belting two in his first two at-bats Sunday. Navigato has a team-high seven home runs this season. In the series, Navigato had four hits, four runs scored and four RBIs.

In the final inning in the Cowboys’ past two games, OSU scored four total runs.

As mentioned above, McCusker knocked in a pair of go-ahead runs Sunday, but Colin Simpson and Alix Garcia each hit solo home runs to tie then take the lead Saturday. That builds off the clutch performance the Cowboys had against Oklahoma in the teams’ midweek game where Max Hewitt hit a walk-off single.

The Cowboys are back in Allie P. Reynolds Stadium on Tuesday, facing Central Arkansas before hosting West Virginia next weekend.