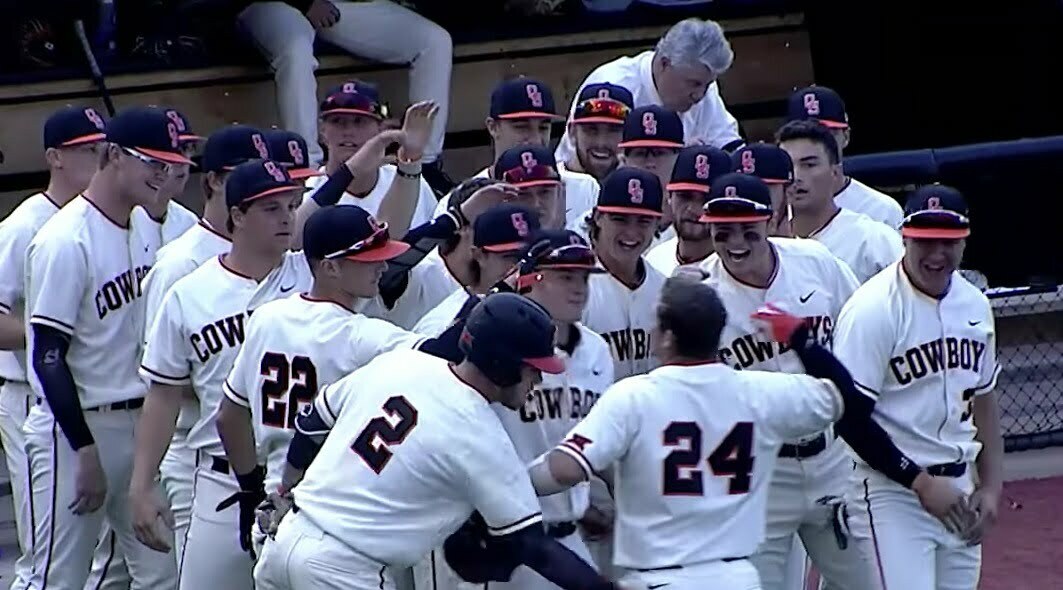 In the bottom of the second inning of the Oklahoma State baseball team’s 4-3 win against Oklahoma, Cowboy catcher Colin Simpson was looking for one thing.

“It was a 2-1 count, so I was just hitting dead red fastball,” Simpson said. “And I got the fastball, so I just let the swing do the work.”

There was a strong north wind blowing through the stadium from left field all game. On Simpson’s home run, he said he knew if he hit it to right field, the ball would probably carry to the foul pole. He knew he caught it on the barrel, but he didn’t know whether it would stay fair, he said.

His solo shot over the right-field fence was his first of the season and the first run of the non-confernce Bedlam tilt. It ignited the offense to score three more runs in the next two innings.

After Cade Cabbiness singled up the middle in the bottom of the fourth and scored Simpson, OSU had raked in a 4-1 lead over the Sooners. Simpson said they put it on cruise control for the middle innings and waited for their bullpen to hold on.

Blake Battenfield got the start for OSU. He went three innings with a hit and no runs. Looked sharp. Hit his spots. To keep him fresh for the Cowboys’ Big 12-opening series against TCU starting Friday, coach Josh Holliday said he pulled him out.

Joe Lienhard, Carson Teel and Cole Hearrean handled the fourth through 2/3 of the eighth. And Jake Cowan closed.

Cowan earned the save defending a one-run lead. He got the final out in the eighth and all three in the ninth after a leadoff single.

He said getting to his checkdowns helped calm him down after the nineth-inning single, but it was still a definite mental challenge.

Every Cowboy who spoke with the media after the game noted how well the Sooners are playing this season. OU was 21-3 before Tuesday and ranked No. 12 in the nation. The Cowboys had won seven straight but were still marinating in the “received votes” section of the rankings.

Fair to say the Bedlam win was an upset.

“I see why they’re off to a great start,” Holliday said. “I thought the kids on both sides of the field were in the moment. … I kinda sensed early, ‘This is gonna be a close game. It’s gonna come down to probably a key pitch or a key defensive play or a clutch two-out hit.’

“And as it turned out late, a 4-3 game. Two very good teams. Well-played game. And I’m proud of the way our team found a way to win.”