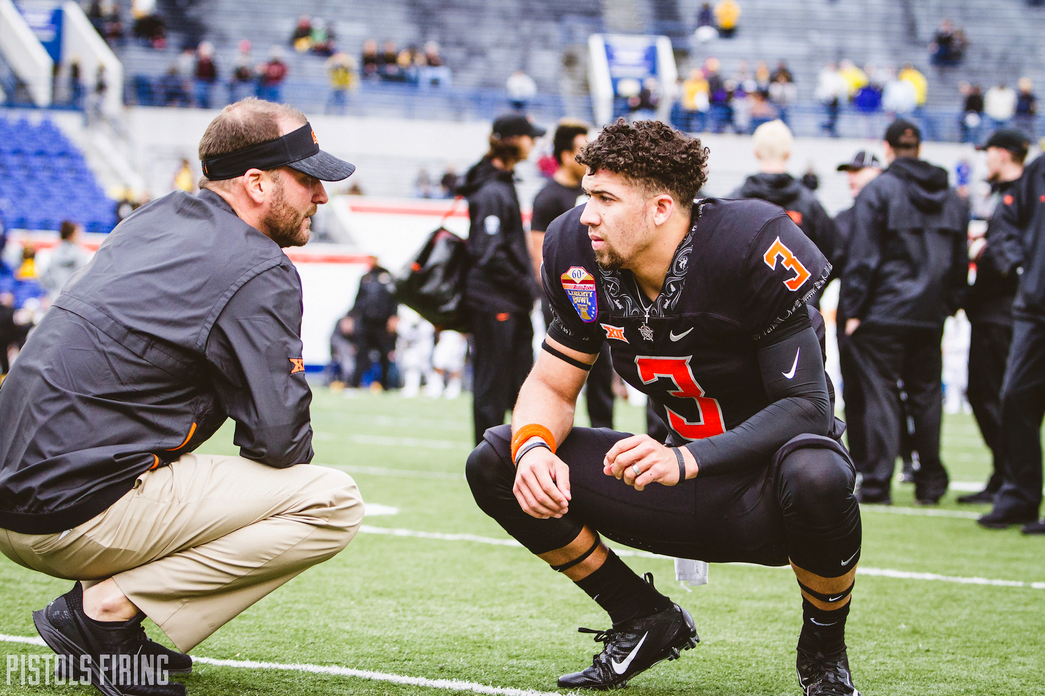 A new year brings new life, new excitement and new opportunities for many. That applies to life, to sports, to everyone. So we’re taking that concept — “New Year, New Me .. Selfieeee!” — and applying it to the Oklahoma State football program.

Who will take advantage of their newfound opportunities that weren’t available last season? I think I’ve solved the riddle by identifying six redshirt players I expect to make noticeable impacts in 2019.

I’m going to look both ways before crossing and then check again for good measure, but … I think Spencer Sanders will be Oklahoma State’s starting QB in 2019.

Granted, Sanders was behind Dru Brown, the Hawaii grad transfer QB, on the 2018 depth chart. So he has some work to do to surpass Brown this offseason, starting in the spring. But I think he has the talent and potential to go from on the bench to (brace yourself for the take) on the NFL Draft radar. He’s going to put up gaudy numbers in OSU’s offense, no matter the coordinator, so long as Mike Yurcich doesn’t somehow lure him to Columbus. (Kidding, kidding … cue Kawi nervous laugh … nervous laugh…)

I’m big mad about Tyler Lacy, the Sachse defensive end, moving from outside (DE) to inside (DT). But I think it’s also an example of how OSU has thrived under Gundy, with a willingness to shuffle players dependent upon need, prospect development and growth.

And grow, Lacy has, apparently. He signed with OSU at 6-4, 240, and it’s believed he’s packed on at least 20 pounds (some have said 40) since arriving on campus. He has the body to contribute immediately upon playing in 2019, and the need at DT, where OSU is replacing Darrion Daniels, Trey Carter and Enoch Smith, likely indicates he’ll be in line to have ample opportunities on OSU’s interior on defense.

It’s Chuba time. And then, beyond him, it’s anyone’s guess. LD Brown has the most experience at OSU, but we all kind of know what his ceiling is at this point. My guess is that Jahmyl Jeter, a no-show for the Bowl game who didn’t play as a true freshman at any point, leaps into the No. 2 spot after the spring and summer plays out. OSU likes his versatility as a hard-nosed runner with speed, and at 6-foot, 210, he has a chance to be a rich mans version of Desmond Roland at OSU. An offseason of work, and staying healthy, will be key to fulfilling this prophecy.

OSU is going to need several of its young linemen to start producing, and considering need, I think Hunter Anthony is the obvious pick here. Or maybe Hunter Woodard. Or Bryce Bray. Gosh, OSU’s offensive line has gobs of potential.

OK, I’ll go with Anthony, but there’s a lot of talent to choose from that makes sense. He was an early enrollee last spring and he’s been in the system for a good chunk of time, now he’ll have the opportunity to produce — either at tackle or, more crucially, at one of the guard spots. He came in at 6-7, 330.

Kanion played in four-but-no-more games this season, showing he has the capability to be a centerpiece on which Jim Knowles can build his defense around in the secondary. Kolby Peel and Jarrick Bernard are the headline safeties everyone knows, but Williams is going to make a splash next season, without question. His 6-2, 180-pound frame almost guarantees it.

Full disclosure, I thought JayVeon Cardwell was going to get more run than he did this season. Silly me. As it turned out, it was Tanner McCalister who soaked up most of the backup minutes at corner. But now that McCalister has moved to safety and Cardwell is a year older and wiser, I think he’ll be in line to push for significant playing time. The goal here for OSU is to develop him into a starter who plays second-string, allowing Rodarius/AJ Green to soak up quality rest. If he’s able to prove there’s not a significant drop-off, I see him earning snaps with the second unit.