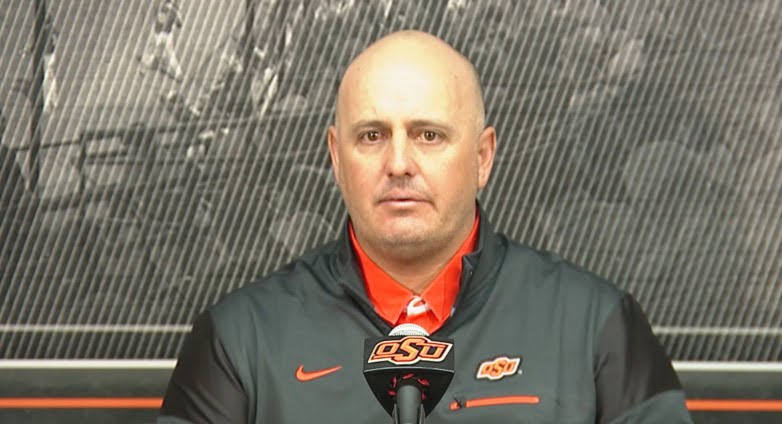 OSU baseball got things rolling last week with its annual meet the media session. This year’s team looks a lot different than last year’s (and says it is moving on from that 2016 Omaha trip). Here are six things you might not recognize when it takes the field against Grand Canyon on Friday in Arizona.

Donnie Walton and J.R. Davis were All-Big 12 selections last year. They had the same yin-yang that Gundy’s mullet does. It’s a shame we got to see their combination for only a year, but we did.

Luckily, coach Josh Holliday’s got options. When Walton broke his hamate bone in his hand a couple of years ago, Jacob Chappell started 20 games in his place. Chappell doesn’t have Walton’s bat or Davis’ glove, but he isn’t deficient in either. On whichever half Chappell doesn’t fill, utility player Andrew Rosa will likely receive the starts. Other options include Ryan Cash and Cameron Dobbs, both of whom Holliday and the players were extremely high on.

Thomas Hatch was a cheat code in Omaha. That’s why he is with the Cubs’ organization now. Based on the natural pecking order, Jensen Elliott is primed to start the opener, especially with Trey Cobb injured.

Elliott posted a 3.5 ERA and went 9-3 in his freshman season. Holliday said pitching coach and part-time wizard Rob Walton saw the potential in Elliott as a sophomore at Coppell High School.

“He saw him pitch, and he said, ‘This kid’s a stud. He can really pitch. He has great command of the ball,'” Holliday said. “Loved him, knew he was special right away. He saw it in him the first time he saw him pitch.”

3. Most of the Pitching

The Cowboys have eight pitchers who are true freshmen and 12 who aren’t. Cobb, Tyler Buffett, Elliott and Blake Battenfield are locks to play, but other than them, it’s all a little up in the air.

Battenfield had 24 relief appearances last year with a 3.68 ERA. He can certainly be the set-up guy, but Holliday might want to bump him to a starting role. Behind him and Buffett, experienced relievers are few and far between, especially with Cobb out with an injury. But he has a few guys in mind, he said. “We’ve got Trey Riley, who’s one of those 94 guys with no idea where it was going; he comes in the other day and strikes out five,” Cobb said. “Nasty slider. Nasty fastball.

“We’ve got Cole Hearrean who’s gonna probably take a (Alex) Hackerott role, but instead of Hackerott, it’s 89 with a sink and a nasty slider. Hack was a steady, stable guy who did his job for us. We’re looking for somebody to do that, too, and I think he could do that.

“We have a bunch of strike-throwers: Reid Morgan, C.J. Varela — they are guys who are just gonna go in there and paint strikes. They might not have the best stuff at this moment, but they are so developed pitching wise that once that stuff comes, they’re gonna be some of the next best guys here.”

So that settles that.

Walton was a four-year starter, All-Big 12, the works. His potential replacements are excellent baseball players, but they haven’t been the guys in the middle of the huddle at OSU, and there is no one dude to point to. Garrett McCain said he’s confident that he and a couple of others can fill it.

“I feel like that we graduated some guys that produced for us, and I think just naturally by the pecking order that it’s our job to fill those roles and produce just like they did,” McCain said. “We’re looking forward to that challenge and that task, and I think it’s something we can handle for sure.”

Cobb is who would naturally fill this spot, and he is still on the roster, so maybe there should be an asterisk by this one. The reason there isn’t is because he is out with elbow soreness until the start of Big 12 play, he said. Cobb has been used in just about every role in the rotation, so that’s not great. Moreover, the Cowboys have no legitimate option to replace him in the closer role. Yet.

“I was joking with John Heasley, and of course we don’t know really who’s gonna start or close, but I could kinda see him being the closer,” Cobb said. “He’s got really, really good stuff, but he’s young. I told him earlier during batting practice, I was like, ‘Hey, man, when I come back in four weeks, I don’t want that job back. Don’t give that job back to me. You need to be so good at that, that they have to find somewhere else for me to be.'”

Collin Theroux set the season record for strikeouts with 95 last year. He will still be missed. Theroux’s defense was superb, and probably irreplaceable. Colin Simpson played in 32 games last year. He started 17. He was used primarily as a DH, but he proved to be serviceable in Theroux’s place. He will probably start, but Holliday has options. Freshman Michael Neustifter and JUCO transfer Travis Wacker (the best name on the team) also have caught their coach’s eye.

“I think Collin Theroux was as good a defender, leader, communicator as we could have hoped for, especially in his first year in our program,” Holliday said. “It will be a new look behind the plate, but I think we have three kids … (who) all do something well, and I think they’ll all get chances to get in there and help us win games.”