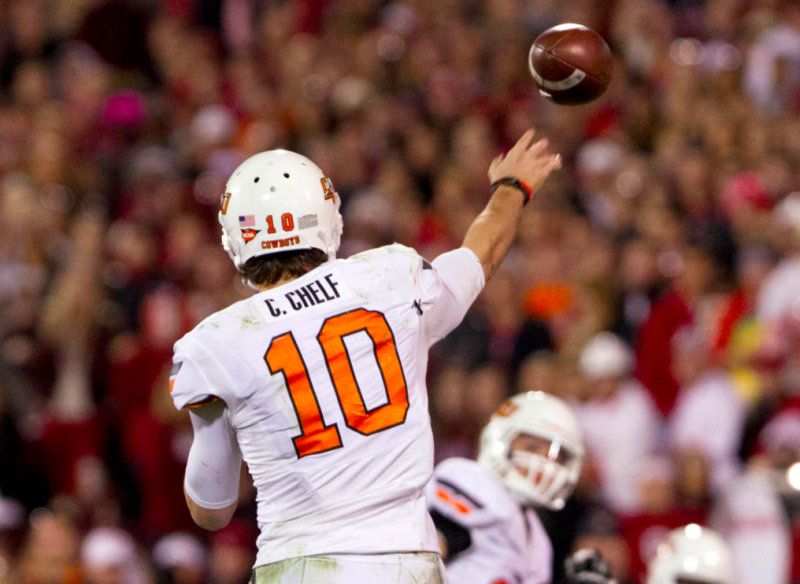 “We want to play as fast as possible”

“I’m not going to lie. It’s a lot faster than when Coach (Dana) Holgorsen was here.”

Parker Graham said it, too:

“Oh my Gosh, it’s even faster than the last one, if that’s even possible.”

Everything we’ve heard since the curtain closed on that whatever that thing was at the Cotton Bowl in January has pointed towards OSU going even faster than before. Gundy even riffed on a no-huddle wishbone O at media days, which sounds just…insane.

The point remains though, OSU will continue to test the limits of speed — and now the Big 12 is trying to help them out.

I wanted to look at how fast this thing could go. How far we’ve come since Gundy took over and who else is testing the dexterity of the people in charge of play clocks all over the country.

First, how far OSU has come. The numbers I’m about to throw at you are simply this: total time of possession on offense divided by total plays. Passing teams are sometimes helped by this because the play clock stops for them on incompletions…though if you’re throwing that many incomplete passes, you likely have bigger issues.

The reason the numbers might seem inflated is because a team holds the ball for a while when it punts, has turnovers, and commits penalties. I didn’t include these as offensive “plays” because, well, those are all things that slow an offense down and I don’t feel like they should be added to artificially enhance these numbers.

And I think that 2005 team was fast because it just scripted three plays at a time then punted. Not much to think about there…that 2009 team was slow because Zac was tired of getting murdered every time he snapped the ball.

Now how do these rank nationally?

Here those numbers from the last six years:

Only seven teams (again, out of 723!) have ever broken the 20-second mark so I would think that’s the goal for OSU. And with that eighth referee added I think they could get it this year.

Oh, Auburn. That was a clinic in why you don’t hire Iowa State coaches who can’t win at Iowa State.

OSU has been really good in this area and is getting better. In and of itself snap speed doesn’t do much, but when you combine it with a “we know exactly what we’re going to do on every play” attitude, well, you have something.

One of the biggest things I’m worried about this year is Yurcich’s ability to pull the trigger quickly on plays like Monk and Dana were able to — those dudes lived to call the right play at the right time and it’s one thing that made the Pokes great over the last three years.