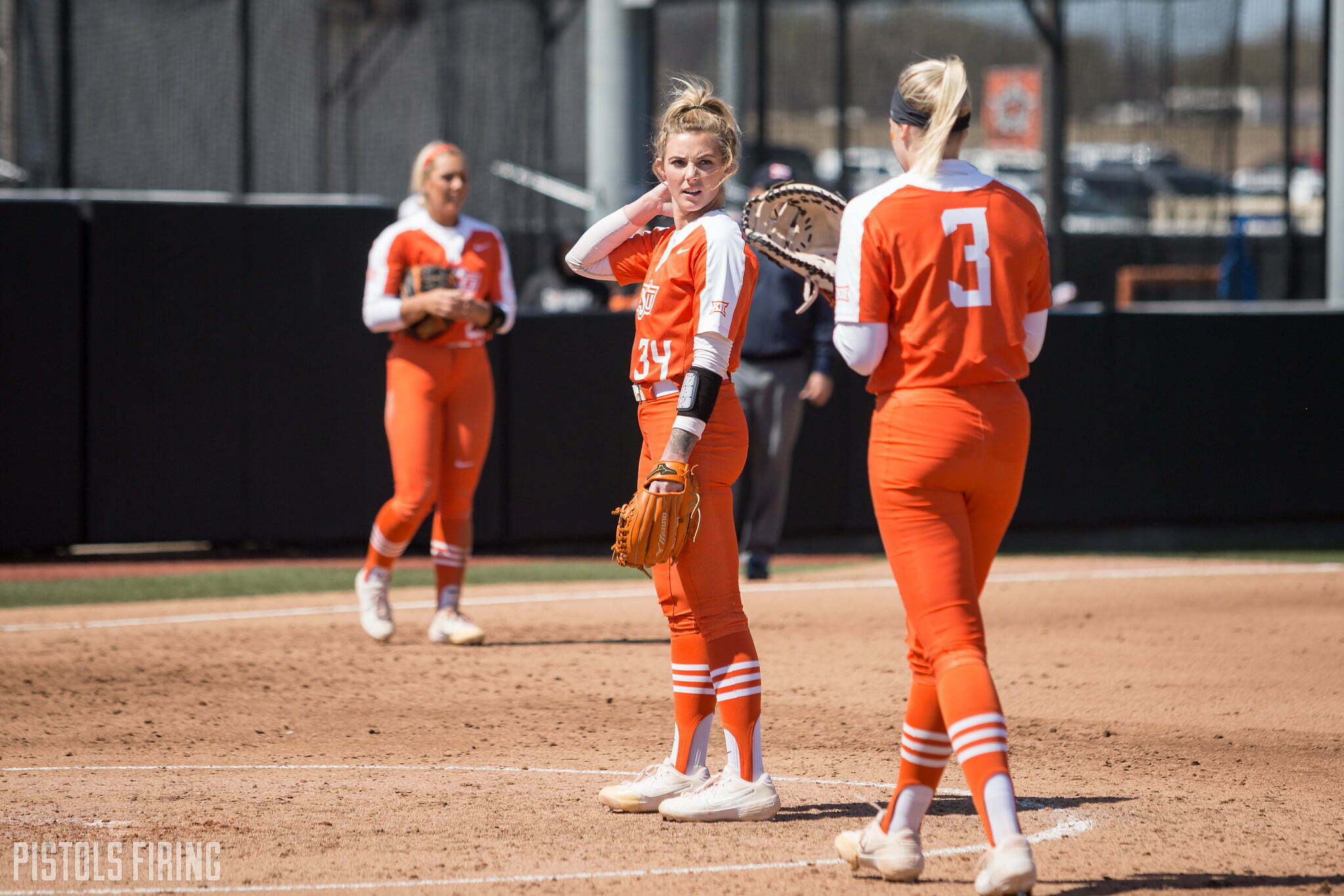 STILLWATER — The Cowgirls are one sleep away from playing in their first Women’s College World Series game since 2011.

The Oklahoma State softball team plays Florida at 6 p.m. Thursday in Oklahoma City. Members of the OSU softball team met with the media Monday, following the Cowgirls’ Super Regional victory against defending national champion Florida State. You can watch those interviews here, but here are some takeaways.

In OSU’s second regional game May 17, Logan Simunek came to the circle to relieve starter Sam Clakley with the Cowgirls down 5-4.

After getting an out to end the third inning, Simunek struggled in the fourth, allowing three runs. Two runs came because of bases-loaded walks and the other was scored on a fielder’s choice. Instead of pulling Simunek for the Cowgirls’ ace Sam Show, OSU coach Kenny Gajewski stuck with Simunek because he needed her for the Cowgirls upcoming postseason run.

Simunek came through as the Cowgirls’ bats came alive, scoring eight runs in the final two innings, while Simunek allowed only two runs after the fourth.

Simunek came through again for the Cowgirls at Tallahassee’s Super Regional this past weekend. She came on in relief in the final two games of the Super, throwing a combined six 2/3 innings where she allowed one run off three hits to go with five strikeouts against the defending national champs. She was in the circle when OSU closed out the series-deciding game three.

“She’s got ice water in her veins,” Gajewski said. “She could give up eight runs, and it’d be the same look. … She’s just very even-keeled.”

Simunek has a tattoo sleeve down her left arm. Gajewski said he used to have her cover the tattoos up, but he has since given her the option of letting them be shown.

“I told her, ‘If you’re not gonna cover up your tattoos, you gotta pitch like a bad B,'” Gajewski said. “And that’s what she’s done since that point. I’ve always made her cover them up. I said, ‘Hey, if you want to pitch with that sleeve on your arm, you better pitch like it.’ I think it kind of gave her a little bit of what she thinks her identity is.”

This fall, Taylor Lynch tore the ACL in her right knee. She had a decision to make: have surgery and take a redshirt in what would’ve been her senior season or try to play on it. She chose the latter.

Lynch said a lot of her decision came down to knowing the potential this 2019 OSU team had and wanting to be a part of it rather than observe it be special from the sideline.

“I knew it,” Lynch said. “I knew it in October when I was making the decision between do I take a redshirt or do I play on a torn ACL? I thought about it, and it took me a little bit. But, as soon as the doctor gave me the news, I was like ‘So can I play?’ My parents were like, ‘Are you sure?’ But I knew this team was special, and I knew we had gotten the right kids in this program with Sam Show and Gabby (Sprang) and Sydney (Springfield), those big transfers. Just those and the kids we already had, we just all got along. I knew what they were capable of on the field. I knew I at least owed it to these girls to try and play. I knew we were capable of going to the World Series, and I wanted to be a part of that.”

Gajewski said he got Lynch in touch with former Gator great Francesca Enea. Enea tore an ACL one season and played on it, then the other knee blew out and she played on it another year.

Lynch struggled in the latter portion of the Cowgirls’ season, going on a seven-game hitless streak that went into the Cowgirls’ Super Regional. She worked her way back into the lineup in Tallahassee and snapped that streak against the Seminoles.

One of eight seniors on her team, Lynch said she was probably the last one out of the dugout as her team celebrated the final out of the Super Regional. She said she sat back for a second to take it all in.

“I made the call in October that this is where we were gonna be, and to sit here and see it, it’s a dream come true,” Lynch said Monday. “It’s something I’ve dreamed about since I started this game when I was 5. My mom sent me a picture today of me in front of the World Series field, and it says, ‘Hey Mom, I want to play here one day.'”

Bat flips cause quite the stir to baseball and softball fans.

Is it disrespectful to the game? Is it all in good fun? Some will never be convinced on way or the other, but it has been evident this season that the Cowgirls are pro-bat flip.

“It is our brand,” Gajewski said. “These girls have created that. I like it. There’s some people who don’t. Sorry. I get OSU fans who write in to me and say it’s disrespectful. I get it. Not here to fight them. I’m just here to tell them sorry. I’m sorry you feel like that.

Gajewski said he gets a lot of write-ins in regards to the bat flips, and he tries to respond to all of them. He reiterated it’s a game that’s meant to be fun.

“Mike Holder has been blowing my texts up on how much he enjoys watching our team play,” Gajewski said. “That’s as traditional as a man that you’ll ever find.”