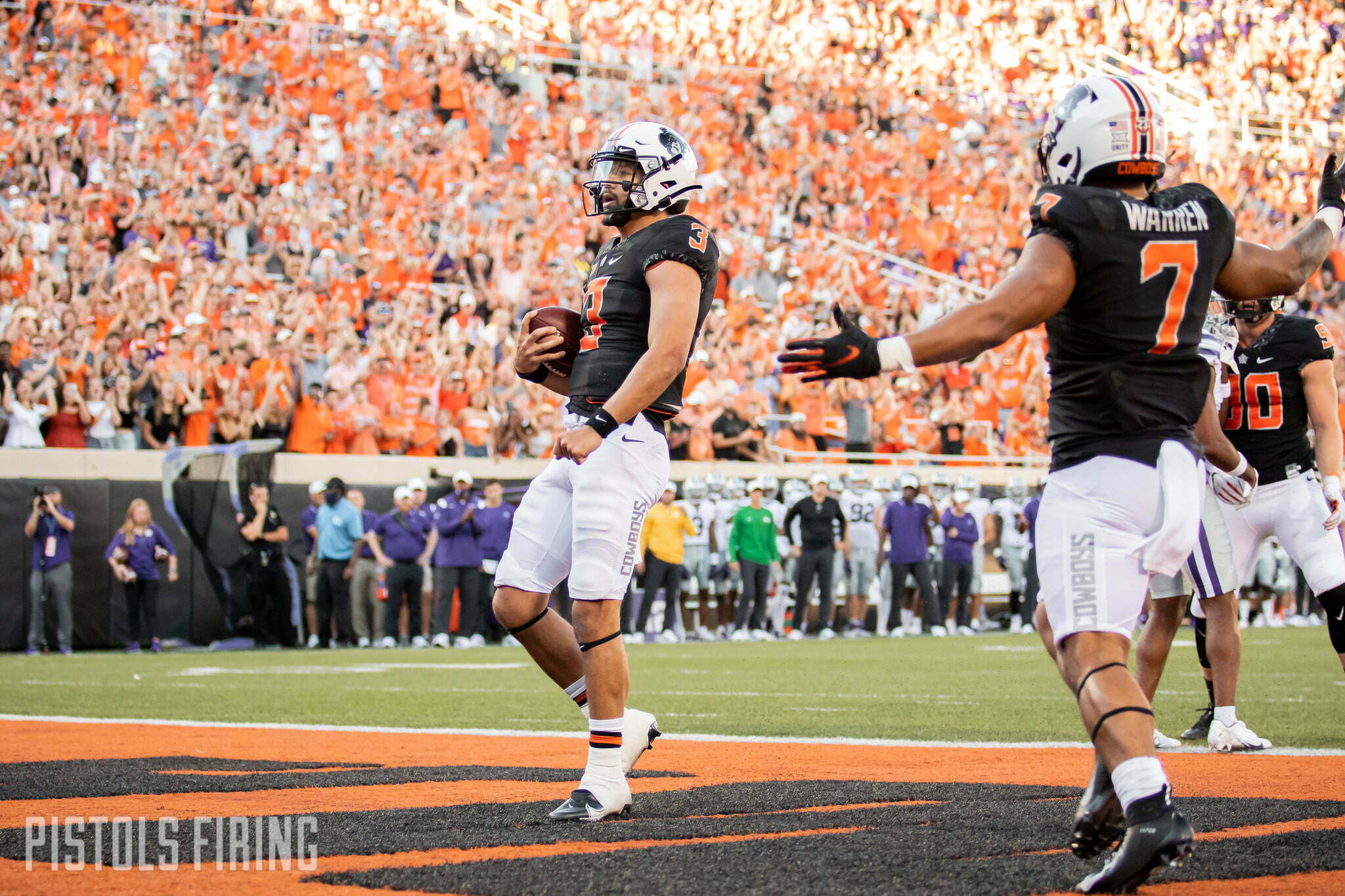 Spencer Sanders’ tenure at Oklahoma State has been nothing if not polarizing. He’s been known as much for his head-scratching plays as his eye-popping ones.

But around these parts, legacies are forged during Bedlam games, and Sanders will get his first real crack at one on Saturday night.

The dynamic dual-threat passer came to OSU lauded as one the best arms to ever sign with the Cowboys and his wheels make him even tougher to defend. But early on, No. 3 experienced his fair share of turnover troubles and growing pains.

But if you’re one of those who still thinks of Sanders as that shoot-first, pick-happy underclassman, you haven’t been paying attention.

“He’s really doing a nice job,” said Oklahoma head coach Lincoln Riley. “He’s improved a lot through the years. … He’s always been a tremendous athlete. I think everybody’s known that. He’s obviously running well and a factor with his legs, and I do think he’s really improved in the throw game, not that he was bad before but he’s certainly done some nice things this year. They’ve done a good job with him.”

In his first five games this season, Sanders threw five interceptions to just six touchdowns. It should be pointed out that Sanders’ receiving corps was decimated by injuries during much of the first half of the season, and his dinged-up, rotating offensive line took time to gel.

You can almost draw a line straight through the middle of the season that coincides with when the Cowboys’ O-line gelled and its receiving corps got healthy. The differences are glaring.

“When we’ve protected him decent and we’ve been able to rush the ball some, his decision making has been good,” said Mike Gundy of Sanders this week.

In his last five games, Sanders boasts a TD-to-INT ratio of 9:1 (and that pick was tipped). He’s played poised, under-control football and has fine tuned his ability to manage the game while using his legs and his arm to take advantage of what the defense gives him.

But don’t call him a game manager. Game managers can’t make throws like this.

The Cowboys have gone from winning despite Sanders’ mishaps to winning because of his strengths. His ability to take off has always been a dangerous boon to the Pokes’ running game, but Sanders has become a master at using his speed. Sometimes it results in a scamper for a first down. Sometimes it’s the wherewithal to astutely flee the pocket and toss a ball to the sideline to live another play, something Sanders recently credited his quarterback coach Tim Rattay for teaching him.

Senior Cowboy back Logan Carter has been impressed with his QB’s progression in Year 3.

“It’s been phenomenal,” said Carter. “[He’s] playing like the quarterback everybody here knew he could play like. So it’s great. Seeing him make the right reads, the right decisions. Stuff maybe you all don’t see whether it’s a throw-away ball instead of trying to force it into a window.

“… [He’s] super confident in what he’s doing. It shows every day in practice. It shows in the games. It shows in his play recently. So he’s doing what everybody here knew he could do for a long time and it’s really nice to see and it’s been beneficial for us.”

Sanders had to leave last year’s game against OU thanks to an injury, and he took in his first two Bedlams from the sidelines, one due to injury and another due to redshirt.

“Obviously, it bothers me a little bit,” said Sanders. “I obviously play with a lot of emotion. It does eat me up inside and just makes me want to prepare and be ready.”

On Saturday, Sanders will get his first real chance to make his mark on Bedlam in what some have speculated might be the last Stillwater edition of the rivalry — and the stakes have never been higher. As if Bedlam wins weren’t enough, OSU could be in the spot to box the Sooners out of the Big 12 Championship, depending on what happens between Baylor and Texas Tech. A win also pads a suddenly very interesting case for a playoff berth.

This isn’t the 2011 OSU team that could have dropped 50 on anyone. The 2021 Cowboys might have a better chance of beating OU scoring 28 than if they score 48. It’s a defense-first, run-you-over and run-out-the-clock team squad that clinched a spot in the Big 12 title game. Oklahoma State’s identity has changed.

But this is also Bedlam, and things are going to get weird. If the Cowboys find themselves in the position to dispatch the Sooners late, there’s a good chance that it will come down to the play you want versus the one you need. Spencer Sanders has always been able and willing to make the former, but he’s grown into the type of quarterback that can recognize the latter.