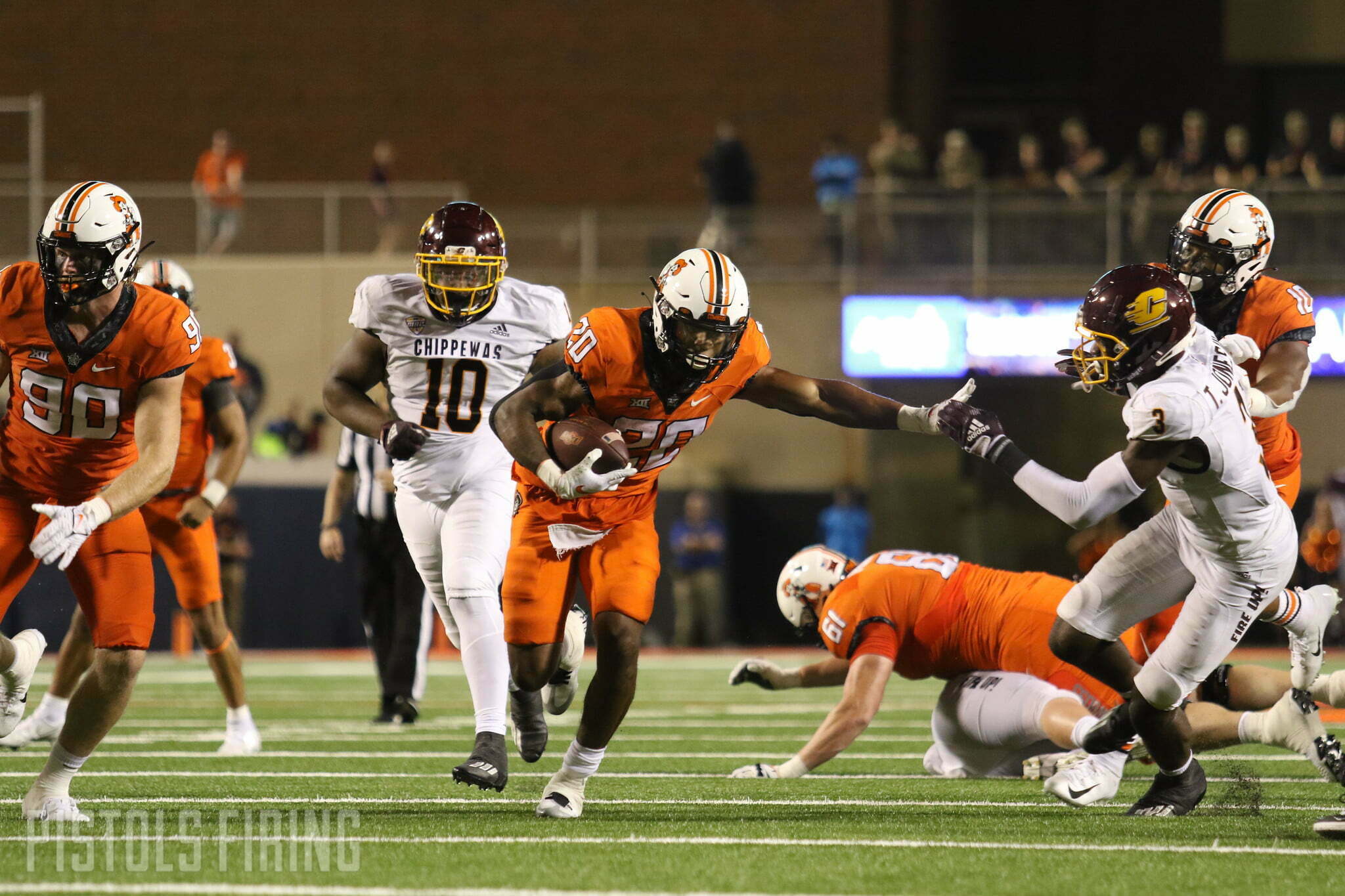 Oklahoma State got off to its 2022 football season early. The Cowboys on Thursday defeated Central Michigan 58-44, so they get to enjoy opening Saturday with a 1-0 start already in the bag.

Let’s look back at the Cowboys’ Week 1 win and hand out some superlatives.

Could it be anyone else? Sanders’ first half put the nation on notice and drew some way-too-early Heisman buzz.

No. 3 picked up right where he left off in the Fiesta Bowl, slicing up the Chippewas defense for more than 300 yards passing and five total touchdowns before intermission. He finished with a career-high 406 yards passing, 57 yards rushing and six scores.

He also earns the award for Best Crossover. Watch him break the ankles of two CMU defenders on his way to the endzone.

Johnson was expected to be a big part of OSU’s 2021 run for a Big 12 title, but an injury (somehow) kept “Wolverine” on the sideline. His position coach and now OC Kasey Dunn gave him that nickname a few years back, and Johnson lived up to it Thursday night.

He led the Cowboys with career-best 133 yards and a touchdown through the air and went berserk on the Chippewas secondary, making big play after big play.

The crown of OSU’s 2021 class had quite the coming-out party in front of the orange faithful. The redshirt freshman tied a game-high with 11 total tackles, added a tackle for loss and an interception. He’s a physical specimen at the safety position and could be OSU’s next star on defense.

Resting a few rungs down on the depth chart, Ollie Gordon didn’t have had quite the debut as Daniels. But the touted rookie running back gave OSU fans a peek at some of his abilities with this nice catch and spin and tough running. He’s going to be fun to watch.

Central Michigan was hanging around for the first couple of possessions, and the game was tied when OSU’s second straight drive stalled. But some keen special teams work by punter Tom Hutton and gunner Brennan Presley set up a safety on the very next play. That play seemed to light a fire in BPS. OSU went on to find the endzone on six straight possessions.

At times, fans have taken umbrage with Mike Gundy’s end-of-half decisions. The narrative is that the Pokes run out the first half with seemingly enough time to make something happen — especially when the pressure is on. This was not exactly Bedlam, but with the shadow of the 2016 fiasco looming and the Chippewas having just scored with 43 seconds left in the half, the pressure was on.

I’m not convinced Gundy wouldn’t have taken a knee had the Cowboys failed to earn a first down on this first play, but Dominic Richardson had his eyes on the endzone.

After Richardson’s big run, Brennan Presley caught a strike at midfield, bounced off a tackle had the wherewithal (and breakneck speed) to set up a shot for Richardson at the goal line.

Which he paid off.