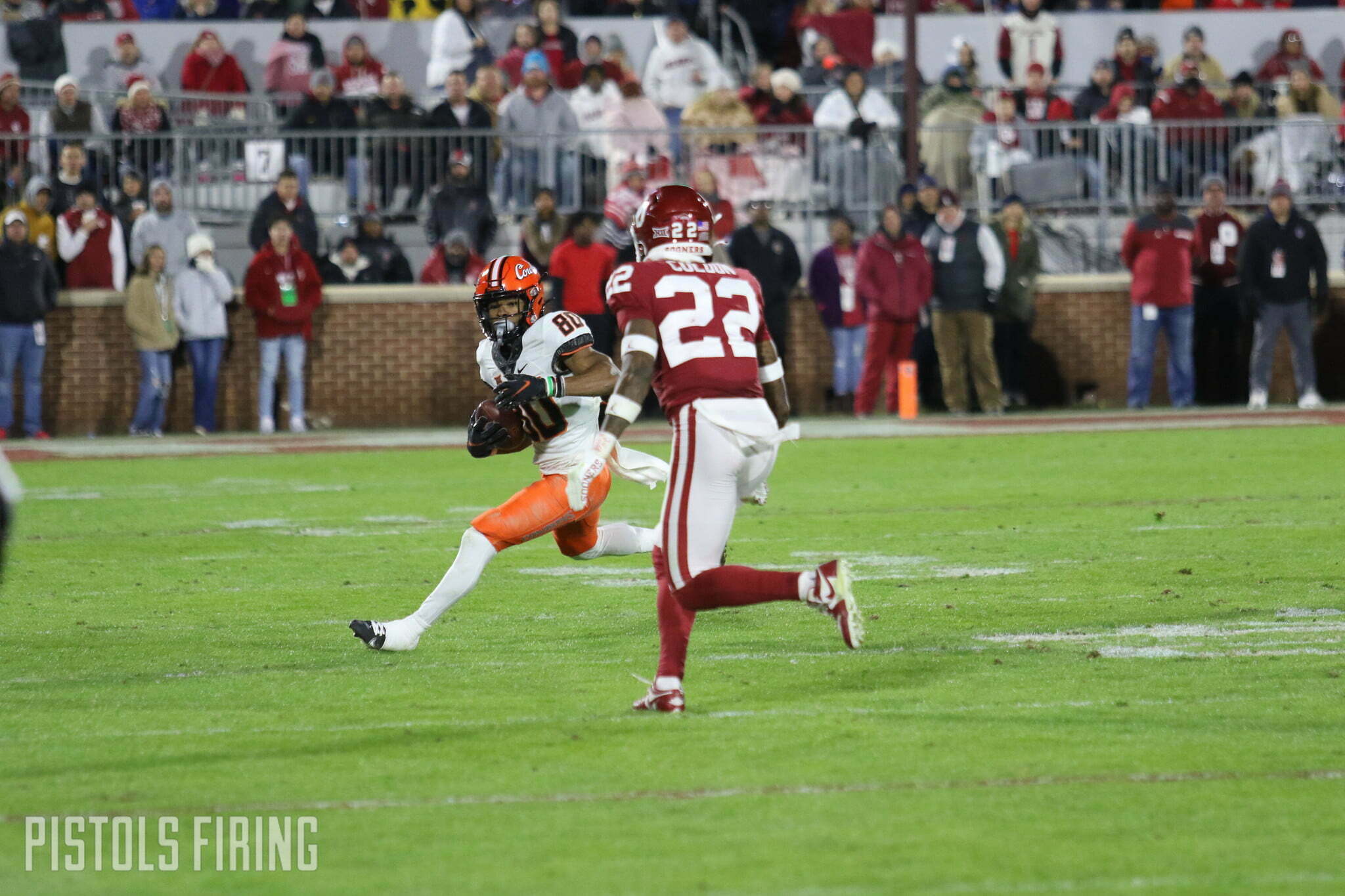 Good teams win; great teams cover. Oklahoma is neither of those, but that didn’t stop the Sooners from going up huge over the visiting Cowboys early and then somehow managing to come out with a 15-point win, despite no discernable offensive output over the final three quarters. It was as multi-faceted an ugly Oklahoma State game as I can remember.

In an effort to put a bow on Bedlam, let’s take one more look at the significant plays that made the difference as well as some of the few bright spots for the Cowboys along the way.

The juxtaposition between Dillon Gabriel’s first quarter and the final three is nothing short of head-scratching. After channeling the ghost of Bedlam Baker Mayfield in the opening period, Gabriel settled back into the pedestrian play Sooner fans have been groaning about over the last month.

Give OSU’s defense its due credit, but OU’s playcalling was strange and Gabriel looked like a completely different player after those first 15 minutes. Here’s one with the cheat code on.

But with the night his counterpart had, it was enough.

That One You Want Back: Spencer Sanders’s Third Interception

Okay, he wants all of them back, but this one tops all thanks to the way it was just laid out there for fellow Denton Ryan alum Billy Bowman, butmostly for where the pass was headed.

Sanders was anticipating a big hit on the throw and had to get rid of it early, and no doubt didn’t see Bowman looming over the top. If he connects with Jaden Bray, it makes up for an earlier miscommunication between the two on his first pick and it puts the Cowboys in a lot different situation knowing how things played out the rest of the way.

If we are highlighting specific plays, there’s not one that’s more impressive than Brennan Presley’s 55-yard catch and run. It was the second-longest play by the Cowboys all season and that’s all due to Presley’s ability to juke dudes out of their cleats.

Unfortunately for OSU, after Presley got them to the Oklahoma 12-yard line, the Cowboys had to settle for a field goal. Still, it will make good highlight fodder someday.

Injuries have plagued the speedy outside threat over the last couple of years, which is a shame when you see him get the ball in space.

In his first action in nearly a month, Johnson hauled in a season-high seven catches for 109 yards. He also picked up 17 yards rushing on this reverse play.

Okay, it wasn’t his actual debut (he’s appeared in nine games this season), but it was his first time touching a football in regulation. The redshirt sophomore Cowboy back caught the first pass of his career in the end zone, in Bedlam. That’s saying something.

Soft hands for a big fella.

The Cowboys’ running game has been pretty much nonexistent this season and the thought of what it would look like in 2023 without Spencer Sanders’ dual-threat ability should keep OSU staff members up most nights.

But the Cowboys have some talented underclassmen in the backfield with guys like Nixon and Ollie Gordon. Both have the ability to make people miss and Nixon put that on full display in this screen pass.