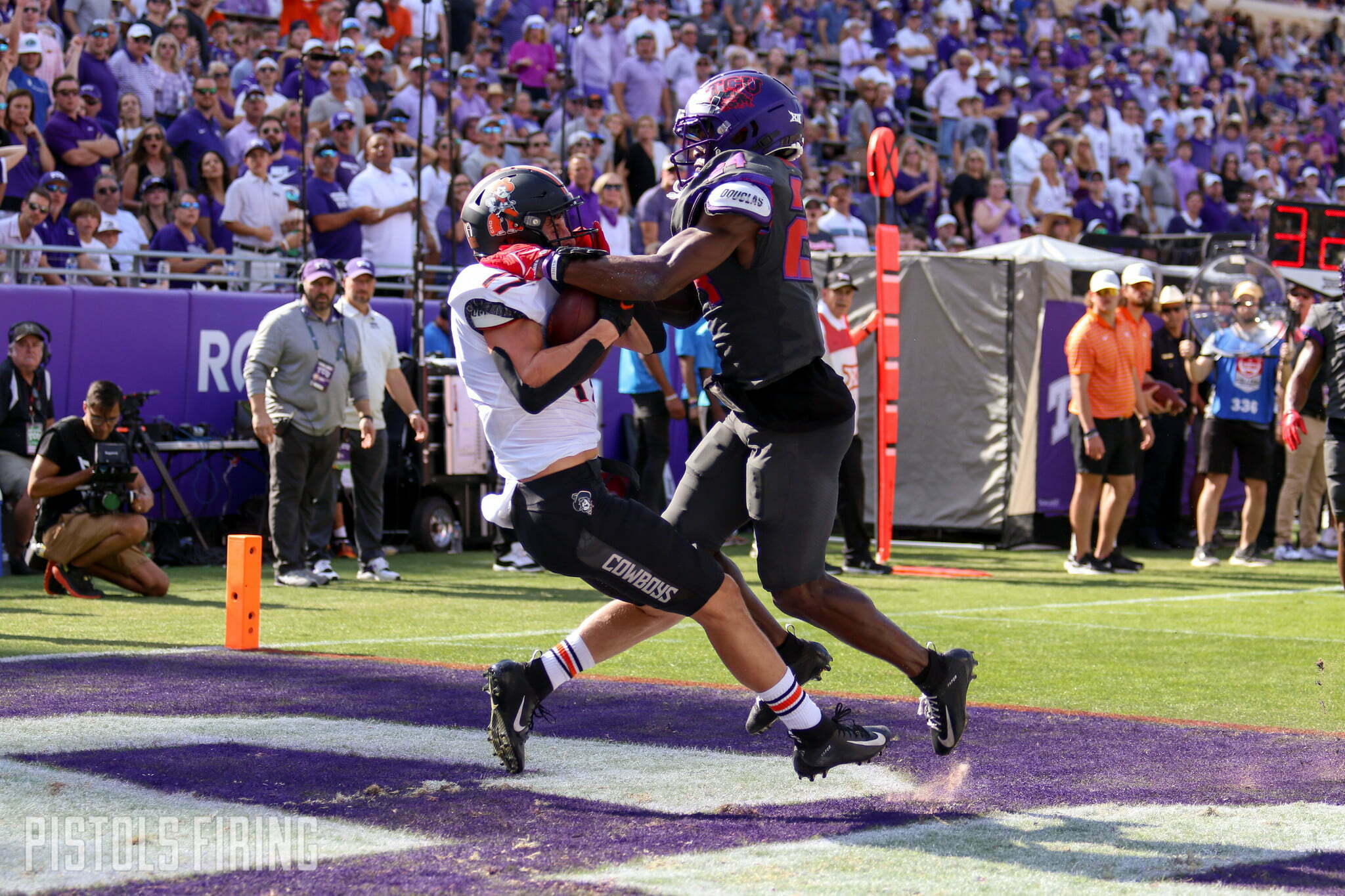 The Cowboys’ win streak came to an end on Saturday thanks in large part to an absence of big plays by their offense down the stretch. But the first half was full of eye-popping action by the Pokes.

Let’s commiserate, and put a bow on the Cowboys’ first loss of the year, by looking at the best OSU plays and players from trip to Fort Worth.

Having your kicker win MVP is not a great sign for your offense, but Brown had one job and he did it.

Brown went 4-for-4 on Saturday including a career-long 52-yard 3-pointer to give the Cowboys the briefest of leads in overtime. He’s a perfect 12-for-12 on the season and 3-for-30 on extra-point attempts. Can’t ask for more than that.

Sanders came into the game banged up and, according to the TV crew, did not even practice the week heading in. But you wouldn’t know if from his first quarter.

Sanders was on fire, punishing the Horned Frogs on the ground and through the air early. He rushed for touchdowns on the Cowboys’ first two drives and then found John Paul Richards for a third one early in the second.

Unfortunately, the Horned Frogs adjusted and OSU’s banged-up offensive line could not give him much protection the rest of the way. Sanders finished with a career-worst 44.4 percent on pass completions and threw a late interception. Even more, he was unable to evade TCU defenders late.

Whether or not his ho-hum second half was due to injury, we’ll probably never know. But this game underlined just how important Sanders is to OSU’s success.

John Paul Richardson would not be denied on this catch despite being held (not called) by a TCU defender.

Richardson was the spark plug that made OSU’s offense run early on. Sanders found him for three catches in the first quarter and then this TD. Unfortunately, as OSU’s offense stalled, Richardson only caught one more pass the rest of the way. Richardson had a team-best offensive grade of 74.8 according to Pro Football Focus.

Best Stuff: Trace Ford Bats Another One Away

OSU’s defensive end is swatting more shots on the turf than most Division 1 centers do on the hardwood. Ford stuffed another pass on Saturday, batting down Duggan’s attempt at the line of scrimmage. Ford has broken up a pass in five consecutive games. He’s T-2nd for passes defended in the Big 12 with six in five games.

Something Out of Nothing: Dominic Richardson

The Cowboys’ run game has not been up to snuff so far this season, but it’s not due to a lack of touch running by No. 20. Richardson constantly falls forward and picks up a yard or two when many backs would have taken a loss.

But on Saturday, he also provided a big boost in the Cowboys’ passing game. When the line struggled to protect Sanders, he was able to dump it off to his backfield mate three times and all three turned into big plays.

Richardson led the Cowboys with a career-high 79 receiving yards on just three catches. While OSU would prefer to be able to get more going down the field, it’s nice to have a safety blanket like Richardson at your disposal.