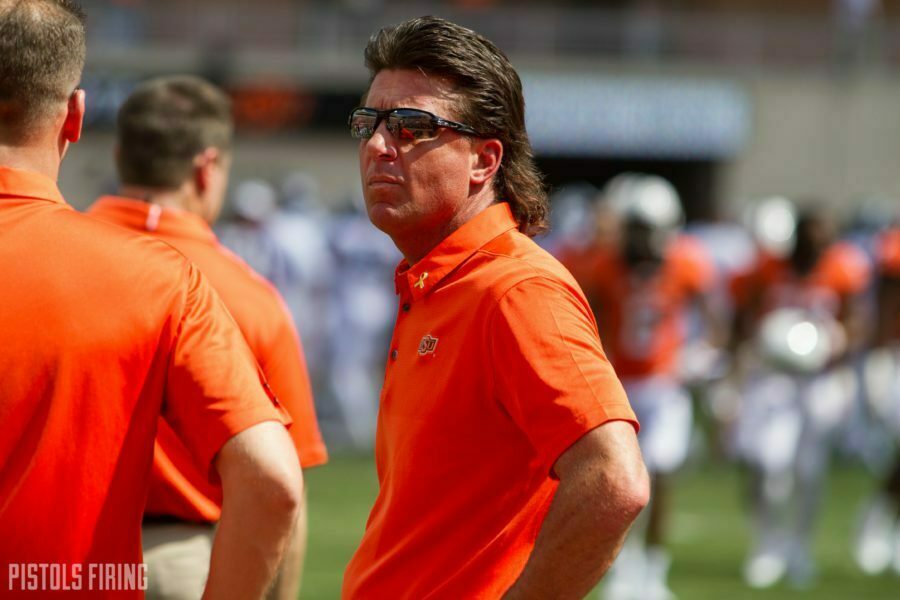 Mason Rudolph sat among media members after his team’s 44-31 home loss to TCU and said all the right things. We’ve got to move on quickly. We’ll start preparing for Texas Tech. Pretty much the coach speak we’ve come to expect from the fourth-year QB.

But toward the end, he gave us a look inside the mind of last week’s Heisman favorite who will likely drop down the board after his team’s loss and his own three-turnover performance.

“I was disappointed,” said Rudolph. “Felt like there was a lot of missed opportunities out there. You kind of wish you had that back but that’s how life goes. You don’t have those second chances.

“All I can do is learn from it and hope to never have that feeling again, as far as my career goes.”

There was a lot that didn’t go Rudolph or Oklahoma State’s way during their Big 12 opener. A fast start by TCU mirrored one of the slower starts by Oklahoma State over the last couple of years. Costly mistakes and even more pricey penalties kept the offense in neutral while boosting TCU’s group led by walking internet meme Kenny Hill who dubbed himself “Kenny Trill” four long years ago.

On Saturday he would have more resembled a “Kenny Chill” if you were to describe the pocket within which he was able to work and his effectiveness at moving the ball.

TCU marched up and down the field at will for most of three quarters and Oklahoma State could only shake its head and watch as its chances at a Big 12 title and more were decreased in September. Losses happen. They suck, especially with a team this hyped and with this much potential. But what does this mean for Oklahoma State who will remain the No. 6 team in the country until the Associated Press releases its Week 5 poll on Sunday?

Mike Gundy was asked if this takes his team, the most hyped group he’s had in six years, still had all its goals in front of it or if the hope of a College Football Playoff berth is still alive.

“Well, it’d make it difficult to come back,” said Gundy. “I don’t think at any time you’re completely out. We’re still gonna play teams that are ranked really high and we have a  chance to play well. And I say this each week and I really mean this.”

To Gundy’s point, a Big 12 title is far from out of the picture. Kyle Porter brought it up during the postgame show. The 2013 team and the 2016 both lost their Big 12 openers and ended up playing for the conference title in Week 12. And with the debut of the Big 12’s championship game set for this December in Arlington, there is even more elbow room at the title-game table, if a couple things fall your way.

Most OSU fans weren’t amped up about a conference championship this past spring. It would be nice, sure. But the thought was that this team would do what the beloved 2011 edition could not, hold focus and take care of the lesser opponent. Give itself a chance to play for all the marbles. Of course, this team is not the 2011 team, and this is not the 2011 season in the Big 12 or in college football. The landscape has completely changed. The Big 12 has changed. And the perception of the Big 12 has changed.

Can OSU run the table? Can a two-loss Big 12 champion get a fair look at that final bracket at the end of the year? It’s hard to answer either right now. Regarding the latter, the Big 12 started this season as the easy No. 5 in Power 5 power rankings in terms of national perception, fair or not.

Then in Week 2, Baker Mayfield planted a crimson-colored flag in the middle of the college football landscape. The script flipped. But then in Week 4, the Big 12’s two teams that seemed to be on a level of their own came back to earth with a home loss to No. 16 and a near-road loss to an 0-3 Baylor.

What will next week bring?

On Halloween, the College Football Playoff committee will release its first ranking. Oklahoma State will have played at Texas Tech, home against Baylor, at Texas and at West Virginia. No cakewalk, for sure. But that’s an eternity in college football. Let’s just see what happens in Week 5.

If Oklahoma State runs the table and finishes the season 12-1 and Big 12 champs, it will certainly be considered for the postseason festivities. That feels a long way off, I know, but less talented teams have played for Big 12 titles. And one of the players from those teams is optimistic about the future. Mason Rudolph’s final thought on Saturday’s game?

“…It will be a small hiccup in our eventual journey and our goals.”