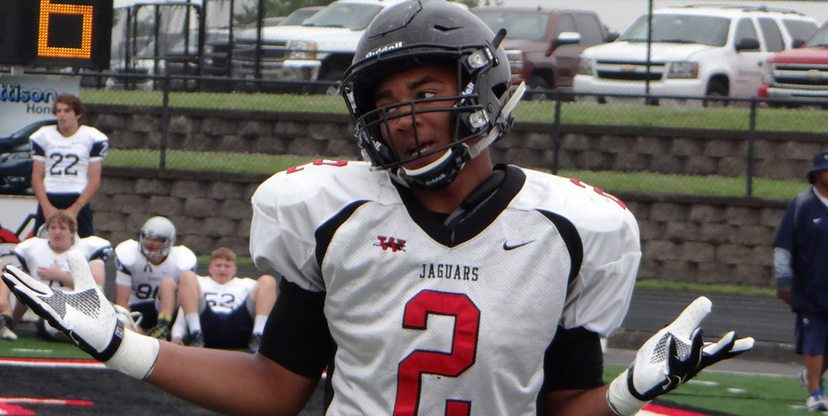 Oklahoma State has had a nice trend of sniffing out top talent within the state and recruiting them early. That paid off this cycle, with two terribly underrated recruits, defensive end Brock Martin and safety Malcolm Rodriguez both committing to the Cowboys.

2018 and beyond may have more talent in the great state of Oklahoma. And OSU has its eyes on several recruits already. Who are they? Let’s take a look.

Tulsa Union wide receiver CJ Moore has gone from little known sophomore to one of the top receivers in the country. 247 ranks him as the 18th best receiver in the country, 3rd in the state. And an emerging four-star prospect with size that has Divison I schools swooning.

The cousin of former OSU receiver Tracy Moore, CJ has a chance to blaze a similar path from Union to OSU, just as Tracy did. As a high school prospect, CJ is more highly touted. And with schools like Alabama, Ohio State, OSU, and basically every relevant school already extending offers, the competition for him will be tough.

Westmoore is the best Moore, so I’m told. And outside Southmoore QB Casey Thompson, tight end James Palmer may be the best Moore area pass-catching prospect in the state.

So far, Oklahoma State is the only school on board. OSU got in on him early. He ranks as a top 20 prospect at his position nationally. And at 6-foot-3 215, he’s a full-grown man at tight end.

If you were to breed an offensive lineman in a factory, he’d pop up less polished than what Brey Walker is. The Southmoore recruit, who is already committed to Oklahoma, is ranked as a top-11 national recruit, five-stars, and No. 2 offensive tackle in the country.

Oklahoma State has already offered. However an early decision with the offer on the table likely eliminates them from consideration.

One of two elite safety prospects from Owasso High School, Proctor figures to emerge as the best defender in the state if he hasn’t already. He plays all over the field for the Rams, lining up in the backfield as a Wildcat quarterback, as a safety/cornerback, and already has the coverage skills to be a day-one contributor, in my opinon, wherever he chooses.

As with several of these, Oklahoma was first on the trail. And the Sooners are considered to be leaders for him, although he has not committed anywhere.

You’ll see Union High School prospects littered across this post, but it’s not everyday you see Division I recruits from Jones, Okla.

Sean Shaw, Jr. is breaking that mold. And it helps being a 6-foot-5 prospect with the skills he has.

Neither in-state school has extended an offer as of yet, but keep an eye on him as a sleeper recruit within the state. The Cowboys may be looking to hear word on CJ Moore before moving forward on their list.

A 6-foot-7 prospect from OKC, Condon has the size you want in an offensive tackle and schools are already taking notice.

Texas Tech, Kansas, Iowa State, and SMU have already offered. And while OSU hasn’t yet, he is on the radar for the Pokes, especially after having visited Stillwater multiple occasions.

Yes, another Union prospect. Patrick Fields is one of the least well known of the many, but he won’t be long. As a 6-foot, 190-pound hard-hitter for the Redskins, he’s a versatile player in the secondary who has the size of a linebacker but the coverage skills of a cornerback.

Fields already has offers from OU, OSU, TCU, Tulsa and Vanderbilt, the in-state schools will be pulling for him to commit to their school. OU is considered the leader by 247sports and its crystal ball predictions.

Being from Mike Gundy’s alma mater, this guy has been on the radar for quite some time. And OSU finally pulled the trigger on this pass-rusher from Midwest City.

Redmond is a big-time basketballer who is still young and raw in his football career, but is already shooting up recruiting boards with offers from Iowa State, Kansas, Kansas State and OU.

Jones and Josh Proctor on this list have been the most dangerous safety duo in the state for several years, and this year is their time to shine. Just a three-star recruit, he’s garnered offers from Michigan State, OSU, K-State, and Illinois.

Sensing a theme here? Three of the recruits on this list are from the OKC area. Tatum is the latest, who picked up an offer a week ago along with Redmond. Also schools who extended offers? Oklahoma, Alabama, Texas, Kansas and Texas Tech.

As you can see, OU leads in the 247sports crystal ball predictor. But with the bevvy of schools hopping on recently, it could be anyone’s game.