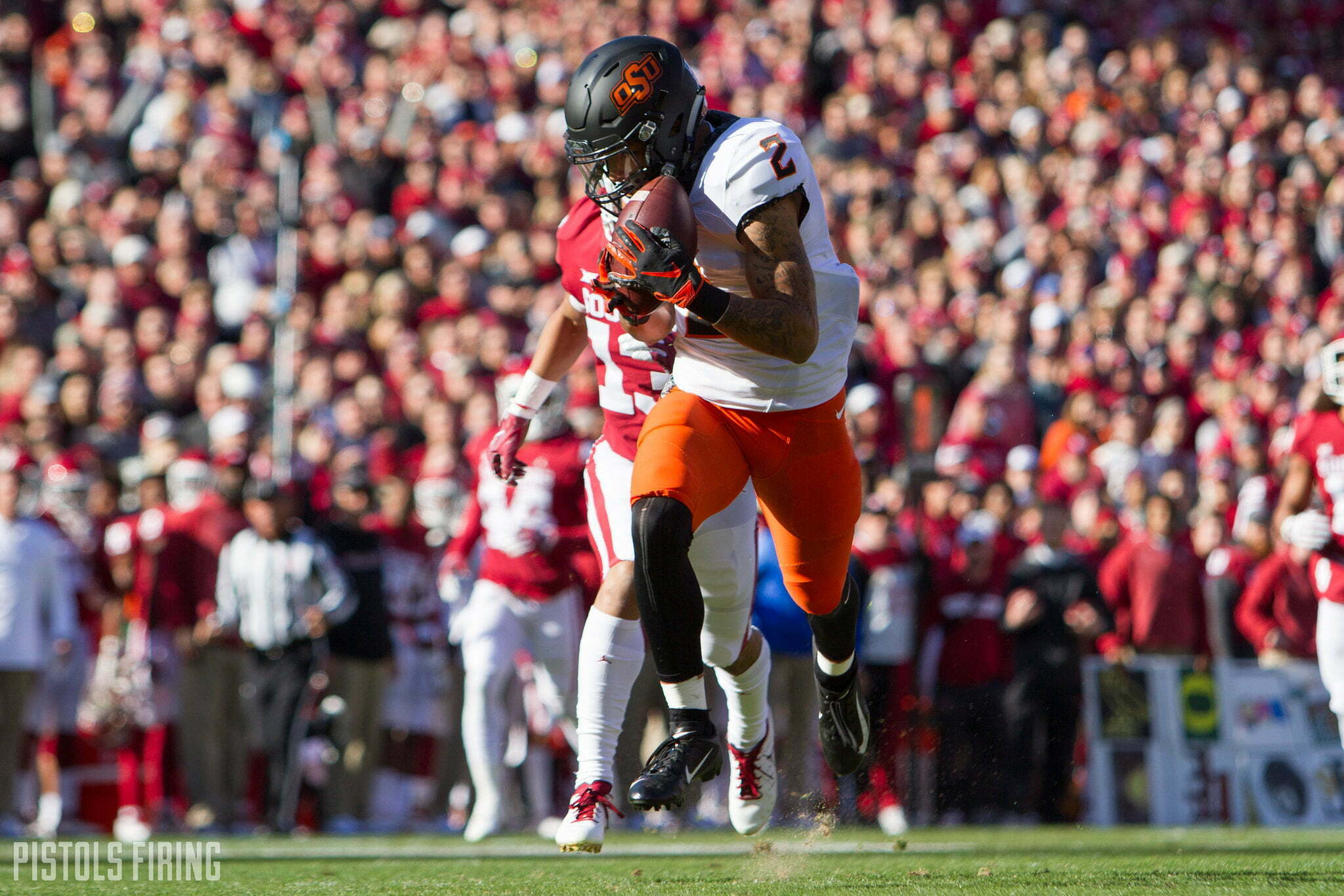 The Cowboys’ 2020 offense had three 2021 NFL Draft picks on it, so one wouldn’t have to stray too far away from those three to determine a list of the hardest Pokes to replace.

Teven Jenkins, Chuba Hubbard and Tylan Wallace have been key cogs in Oklahoma State’s offense for the past three seasons (if not longer for Jenkins). And, despite not being drafted, Dillon Stoner is expected to make the Las Vegas Raiders’ 53-man roster next season. Stoner caught passes for the Cowboys when Barack Obama was still president.

So, let’s take a look at just why OSU will miss that group of pros in 2021 and how they might be replaced.

Jenkins made 35 starts in the past four seasons for OSU — 26 at right tackle, seven at left tackle and two at right guard.

It’s hard to say exactly what the Cowboys’ offensive line was supposed to look like in 2020 because in less than a half, the Cowboys were down two men. Jenkins started the first game of 2020 at left tackle, but he had to make his remaining six starts at right tackle because of injuries elsewhere.

He primarily played right tackle in 2019 and 2018, making 19 starts at the spot to the six he made at left tackle.

So, when you “replace” Jenkins, do you do so with a right tackle or left tackle?

Jake Springfield made nine starts at left tackle as a freshman in 2020, and JUCO product Caleb Etienne is also expected to compete for the spot (Dustin Ragusa did an excellent breakdown of his game here).

Hunter Anthony started the 2020 season at right tackle but was one of the early injures.

Josh Sills is probably a more natural guard, but he started a game at left tackle and four at right tackle in 2020. He is also considered the Cowboys’ best offensive lineman in 2021.

Losing a top 10 rusher in program history might be considered a death note for a lot of programs, but the Cowboys have a healthy stable of runners in 2021.

Hubbard’s 2019 season trailed only Barry Sanders’ 1988 season in terms of rushing yards in the school’s record book, but injuries controlled Hubbard’s 2020. He managed just 133 touches for 625 yards as a junior.

However, Hubbard’s injuries did flex OSU’s depth at the position, as LD Brown, Dezmon Jackson and Dominic Richardson all had 100-yard rushing performances last season. The Cowboys’ also added Utah State transfer Jaylen Warren this offseason, who impressed in the spring.

Brown is the most veteran of the group, being a depth back for the Cowboys since 2017. In 2020, He ran for 103 yards and a score against West Virginia and 110 yards in a gutsy performance against Kansas State.

Without Hubbard or Brown, Jackson ran over, through and around Texas Tech in 2020, going for 235 yards and three scores.

Richardson’s coming out party came against Baylor when he ran for 169 yards and three touchdowns as a true freshman.

Warren played in three games for Utah State last year. He had nine carries against Fresno State where he ran for 136 yards (15.1 yards per carry). He was one of the hot names throughout the spring.

Unless there are injuries (which last season proved possible), it’s hard to see OSU rotating four running backs in 2021, and I think Richardson is unfortunately the odd man out here. There is plenty of promise for Richardson moving forward, though, as Brown, Jackson and Warren are seniors.

When Wallace was nursing injury, Stoner would usually slide from the slot to the outside to fill in for him. With Stoner also gone, all eyes turn to Tay Martin.

A Washington State transfer, Martin replaced Wallace at the end of December’s Cheez-It Bowl, where Martin had six catches for 73 yards. He had three 100-yard games as a Cougar, all coming in 2018.

Stoner was an integral piece in the Mason Rudolph, Taylor Cornelius and Spencer Sanders eras of OSU football.

His 191 receptions rank sixth in program history. On just eight catches against Baylor last season, Stoner had 247 yards and three TDs. It was one of his five 100-yard receiving games in his career.

The Cheez-It Bowl also showed the future of the slot position Stoner has manned all these years: Brennan Presley.

In that game, Presley had 118 receiving yards and three touchdowns.