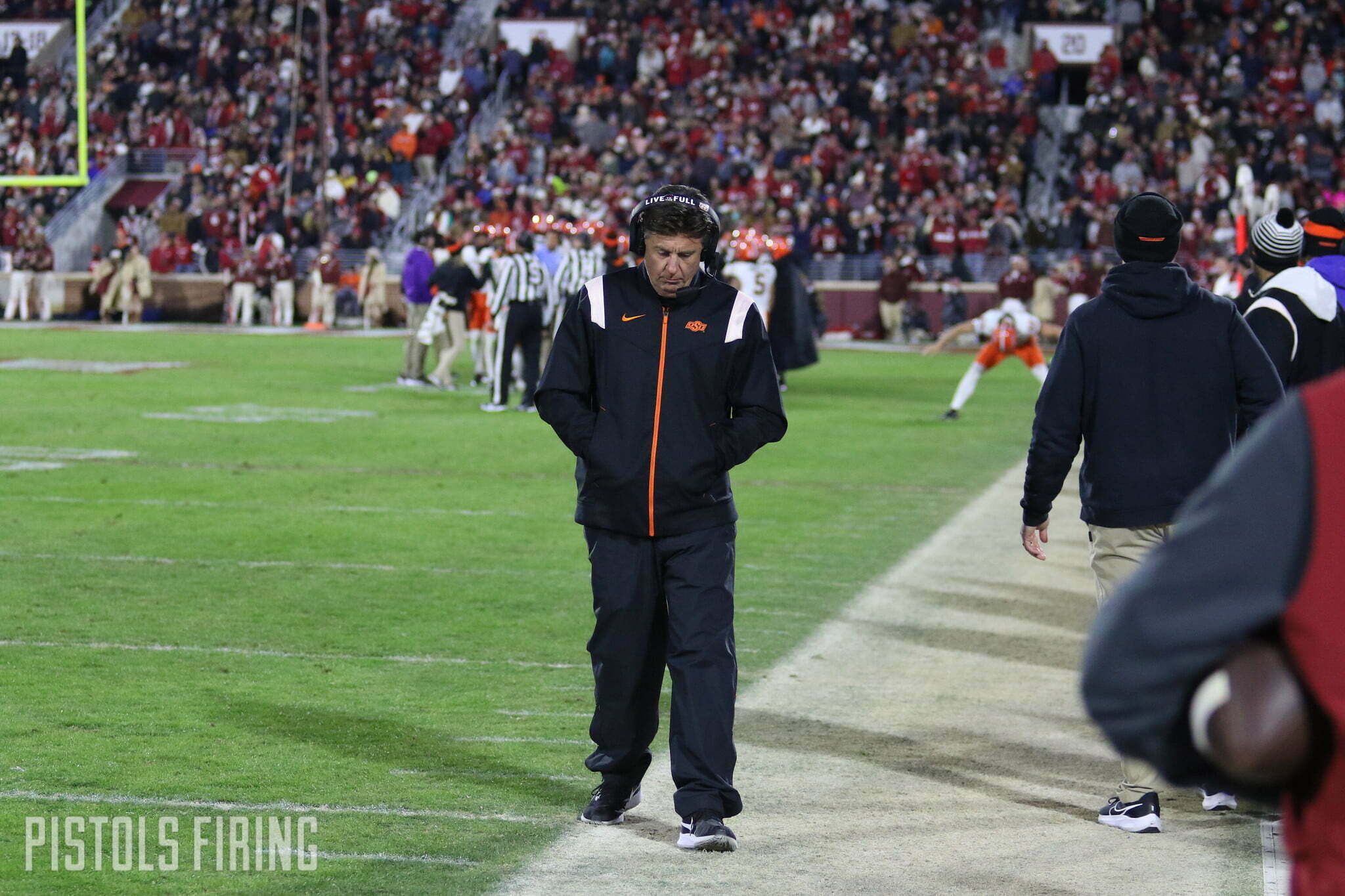 NORMAN — Mike Gundy had a chance to win consecutive Bedlam games for the first time in his career, but after an early Sooner flurry Saturday, the Cowboys came up short.

Here is everything Gundy said in his postgame news conference.

“Well obviously turnovers were the thing that got us in this game. Defensively we got down early, but offensively we kept putting the defense on the field in the first quarter, backs against the wall. And then guys rallied up defensively and made plays, tackled, did a really good job. Held on to 1 of 14 on third down, pretty dang good. But offensive, we just can’t manufacture enough right now. We’re limited in certain areas. We can’t manufacture a lot, and then obviously Spencer (Sanders) didn’t play very well today. Turn the ball over like that, obviously you don’t get a chance. We had a couple of times there with a chance we could have scored, and turned it over and didn’t give ourselves a chance. Penalty-wise, 20 yards in penalties and almost 38 minutes time of possession; 7 of 22 on third downs, not bad. Punted the ball well, covered well. Defensively, as I said, played really well for three quarters. But, now that I scan it, it pretty much comes down to turnovers.”

“A lot of pressure, right? It’s hard to throw when there’s pressure on you.”

On whether offensive line blocking was an issue

“We just didn’t protect him very well, and put him on the run a lot. And I think he hurried a few throws.”

On whether he got a feel for why the game got out of hand early, and how the defense turned it around

“They hit us on a couple plays on offense, and then we turned it over. We gave them the ball one time at the 4-yard line, and then the other time on the, what, 22-(yard line) or something?  So defensively, played pretty good. Really when you look at it. Gave them a 4-yard touchdown drive and then like a 20-something (yard) touchdown drive. And they only ended up scoring 28 points. So, defensively we played pretty good. Really good the last three quarters. But obviously offensively we couldn’t get a lot going and then we couldn’t finish. But I’m going to come back to the turnovers. That’s obviously a big deal.”

On whether Oklahoma State changed anything defensively, or simply played better after the first quarter

“They made a couple adjustments at halftime, but I think they just tackled better in the second half, and covered down pretty good.”

On whether Oklahoma throwing the ball a lot was unexpected

“I had the same thought when I was talking to them on the headphones and they said it’s the same stuff they’ve done. Pretty much the same stuff.”

“Well, there’s no reason to go for fourth downs in the second quarter, and potentially dig yourself deeper into a hole, but then as the game goes on, the clock starts to work against us and so we have to try to convert to keep things alive.”

On what the issues are on the offensive line

On whether there was any sense of panic down 28-0

“No, I thought they played good. I mean, most of these guys are pretty well trained. They don’t panic and they understand that the other team is gonna make plays, you’re gonna make plays and they kept playing and rallying back. And we had a chance, I mean, I don’t know what it was there seven, eight minutes to go we threw an interception in the end zone. We score there, it’s a one-score game. And then at that time, play calls become more difficult for the other team, because you got to be a little careful. It was like the last drive they had when (Mason) Cobb jumped up and knocked the ball down. What if he catches that and runs it in? You know what I’m saying? So it’s a little different, but we never could get over that edge.”

On Oklahoma being more aggressive when it built an early lead

“No doubt, that would be like the worst-case scenario we could have set ourselves up for, was to allow them to — you know they were in a fourscore game, so now they can roll the dice more on their play-calling. And we fought back and rallied and got ourselves out of it and in good position. Like I said, we had a chance to score there and make it a one-score game and we didn’t get it done.”

On Oklahoma being able to blitz more after getting up early

“Yeah, they could dial up a lot of different things. When you’re in that position, it’s a little bit easier to call it and they can dial up different play calls.”

“The first one counts, unfortunately. They hit us on a couple good plays on offense, and as I said, we turned the ball over twice, gave them short fields. From that point on, yes, it was good if not better football than they did, but unfortunately they count the first quarter.”

“They hit us on a couple of throws, but again, I’m gonna go back: I know they started on the 4-yard line on one drive, right? And the other one was on the 23 or 30 or something. You give them two short fields. It makes it look a lot worse than it really was. But, ya know, we’re gonna play four quarters. We ended up with 484 [yards] and they got 434. But unfortunately … I’m gonna go back to the turnovers. The turnovers just are really difficult, and that’s what happened.”

On whether Spencer Sanders’ health affected his accuracy

“Sure, but he’s coming around. He practiced more this week. I mean, he didn’t practice as much as he normally would when he was healthy, but he practiced more. He had a lot of pressure on him. He missed a few throws, but you’re gonna miss some throws. They had a lot of pressure on him, and when you get that much pressure on him, it’s even more difficult. It’s hard to stand back there and throw it when guys are flying all around you. He competed and made plays, he just had a couple throws that he’d sure like to have back, particularly the one going in down there when they fired the corner and the safety came all the way over the top and intercepted it. If he sees that, he shoots that ball in there, it’s a touchdown. And most times he would, but he didn’t see it that time.”

“You said the last few years? Well, I can’t answer a question going back the last few years. I mean, I could be real obvious and say if we don’t get guys injured, that would help. But, I try to be nice. Just got a few guys beat up, so unfortunately we’re down a few guys. You get down three scores and four scores and you’re down some guys and they can open up their playbook on defense.”

“There’s communication between the quarterback and the wideout. That scenario happens successfully happens way more than it happens unsuccessfully. We were off base on that twice, and one of them cost us a pick. And the other one almost cost us a pick. We’ll have to do a good job of looking and making sure that we’re on the same page there, maybe come up with a little bit cleaner answer than to take a risk that we were in today in that situation.”