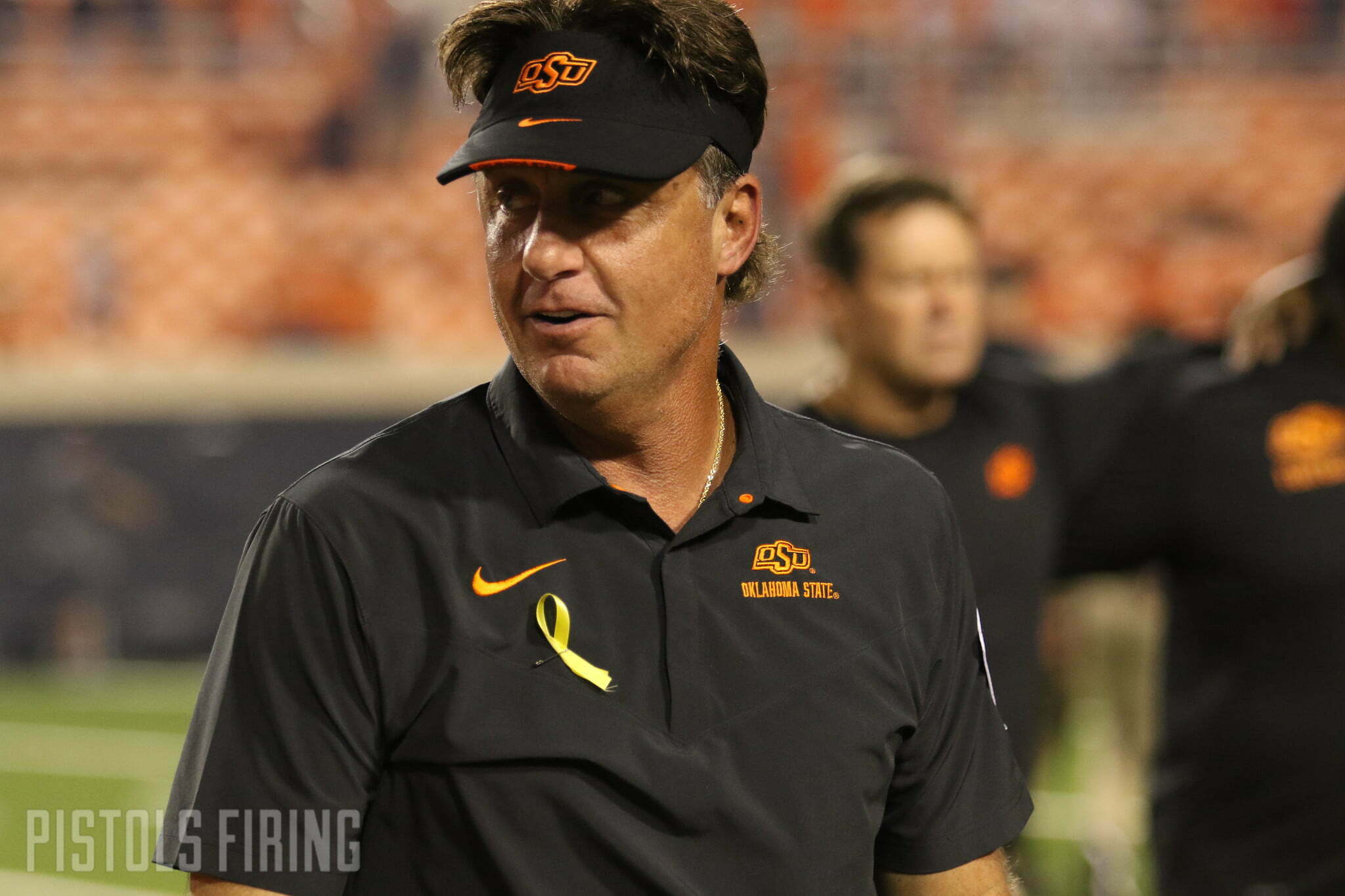 Oklahoma State blew out Arkansas-Pine Bluff 63-7 as the Pokes head into their bye week. Here is what Gundy said after the game.

“Our guys did a good job of taking care of business. We talked about this last Saturday that, you know, we understand on paper that we have the better team, but we need to prepare, practice, respect our opponent, go out and play. And so, I told the team after the game just now in the locker room that I was proud of them for doing that. Staying focused. They focused all week they practiced well and started fast and play well.

“So, it was a good opportunity to get a lot of young people in the game and get them some experience. Get them some reps. You know, they practice too, so it’s good to get them out there and let them have a little time. So obviously, it’s good night for us. We’ve got a pretty heavy week this week in our open week we’ll practice quite a bit. Then we’ll give him two or three days off and then we’ll come back and get ready for conference play with Baylor.”

On how the reserves played

“I thought they did good. You know, sometimes I’m listening to something else and I don’t really know what, you know, I don’t hear the calls as much in that situation. But, we were able to play a lot of them on special teams, and then, you know, for the most part really the twos on offense and defense for two and half quarters. So, I thought they played pretty well. You know, they gotta get out there, they gotta get lined up, you know get over being on the field, and nervousness, and let them get hit or let them tackle and make mistakes. And so I thought they played pretty well.”

On the special teams touchdowns

“Coach (Jason) McEndoo did a nice job on punt block and had a good plan, and it worked well for us. And then Korie (Black) did a good job on the scoop on the field goal. I think somebody said that’s the first time we’ve ever had two special teams touchdowns in one game. We’ll know a lot more in three or four weeks. I like our special teams. I like the bodies, I like the guys that are on there. Their willingness to compete on special teams has been really good so far.”

“I think he blocked it and returned it, which is pretty rare. But, he practiced well this week. When we put that punt block in, he went full speed. Practiced full-speed, took it serious and it worked for him.”

On whether the performance was an indication the team practiced well

“Yes. Look guys, we can call it like we want. I’m honest with it. We’re a better team, but we need to go play like we’re a better team. And the preparation, the Sunday through Friday, Saturday morning is important for us to prepare, as I said in here last Saturday. For the rest of season, we need to practice. We have a lot of young players. And even when we send the ones out there, we’re an inexperienced team and so we need practice. We need these games to play well. So I’m pleased with the way we played the game.”

On the squib kick that was recovered by Oklahoma State

“I mean, he ended up just hitting the guy, but it was just gonna be a squib, because of the 15 yards.”

“No, he probably couldn’t do that again if he tried. But what happened is that guy moved. So he’s kicking to a certain area, and then if you watch it on the replay, I just happened to look at the replay board, he wasn’t where he was when he last saw him, because you know, the kicker’s looking at the ball. So he took off running and ended up accidentally running into the direction of the kick.”

“I mean, I’m still dad. Obviously, you know, I watch them all. He played well. I thought that he handled the system, he converted some third downs, he ran the ball effectively. I think there was a couple times where they disguised and rolled coverage and instead of forcing the ball into coverage, he pulled it down and took off, which is normal when you’re young and early in your career. I’m pleased with the way he played. I wish we could have got (Garret) Rangel a couple more series to give him a chance to get out and do some things, but we needed to, you know, we needed him to play to kind of find out where we are with him. And then hopefully as we move forward, we’ll be fortunate enough to get Rangel in and get some time. But I thought he did a good job and handling it, without watching the tape.”

On whether he is able to enjoy the moment

“You know, he threw a touchdown pass, and so I (fist) bumped him. Gunnar (Gundy) stays away from me, because he doesn’t want people to see him around me. If you notice, watch sidelines, watch practice, he stays away from me for that reason. So, I have to go run him down to tell him, ‘Good job,’ because he doesn’t want to be around me for that reason. But you know, I went and told him, ‘Good ball’ on the touchdown and ‘Good ball’ on the other touchdown, which I would anybody. I did same thing to (Talyn) Shettron. It’s a big deal. It’s his first touchdown catch. So, I think maybe, I don’t know if [Cale Cabbiness] had one or not. Is that [Cabbiness] first touchdown? Yeah. So, I didn’t know if that was his first or not, but (I) congratulated him just the same.”

On why Gunnar Gundy stays away from him

“Gunnar’s a very quiet, seclusive person anyway. And so, I think he just stays away from me because I’m the coach and I’m him dad. And I don’t say anything to him. I just let him be who he’s going to be, but he will tend to veer away from me in those situations, because he just doesn’t want people seeing him hanging around me.”

On the end of nonconference play and where the team is

“I think we’re right where I said we were. We have some young players that need reps and they’re getting some reps, are getting better. They’re still making mistakes, but they’re getting quality time. You know, Spencer (Sanders) continues to play well. I think he sees the field and feels really good about what he’s doing, makes us look really good a lot of times. We still need to work harder rushing the football. Now, this team backed  everybody up from about probably the start of the second quarter. The rest of the game they just kind of backed everybody up. So, you’re going to see more runs and stuff. But, for the most, we’re getting better. We need more practice. We’re a ways away, but I am pleased with our focus. I am pleased with their commitment. I am pleased with our effort. And it seems like their [missed assignments] continue to get smaller in every game. But we’re getting ready to play the returning Big 12 Champs on the road. So, we definitely need every practice we can get.”

On the placement of OSU’s bye week

“If you were gonna draw it up, you’d say one more week would be perfect. People say, ‘Well, it’s after the third game and you play 12 games before you get into the next set. But here’s the difference, we practice the entire month of August. So that’s one month, so we’re almost at two months right now. So I’m OK with it. It’s fine where it was. If you could draw one up every year, you’d have it after the next game, but that’s OK.”

On whether OSU-Baylor is an emerging rivalry

“Baylor is a good team and Baylor is well-coached. In my opinion, they’re going to be a good team in this league. So hopefully, we can fall in that same category, and when we compete against each other they’ll be really good games like they were last year. I’m just not big on all that. We need to be able to respect everybody we play. We need to prepare and compete against everybody we play. And coaches put good game plans together, players work and understand and go play hard. That’s really what we do versus trying to hang our hat on who somebody is because we’ve got to play next week, too. So I’m not gonna put all my cards over here when we still gotta go play the next week. Guys got to stay this way. You can do this. If you do that, in my opinion, it’s not good for your team. You got to play at a consistent, high level all year long.”

“Without watching the tape, it’d really be hard to say.”

On Talyn Shettron and Stephon Johnson

“I thought they played well. They get out there. They’re young. They’ve never played before. They’re gonna make mistakes. But for the most part, I think they played well. [Shettron] only had one ball thrown at him, right? He’s a touchdown specialist. We use him for just touchdown plays. But they’re young guys. We like those young guys. We like where they’re at. They’re a long ways off. They’re a long ways off, but they need to get reps and they might have to be in games this year when the money’s on the line. They all need reps. They need to play. We got to keep going. I wish we could have got Rangel a couple, three more series. But we were able to work a lot of the young guys at the other skill positions on both sides of the ball.”

“Yeah, those guys do. When you get in that role where he is, Brock Martin, those guys, they become very appreciative of the program, the culture. And especially when you have something taken away from you. Trace Ford had a rough go last year and came back and doing really well and playing hard. It looks like his old self, and that’s a lot of fun.”

“We didn’t get up to par health-wise offensively until about the sixth game of the year. We played with young players. And really we played with young players even at that point, but they at least could get lined up and make a play because they had been out there. But we played half the season offensively with, it was scary. Put it that way. And we all know the defense played really well. So now we’ve got a little more maturity on offense. Knock on wood, we’re keeping guys healthy and our skill healthy. And then defensively, we have some youth that we’re trying to kind of get going and keep them going.”

“He makes a lot of plays. He’ll be playing in games in the flow of it, too. He’s one of those guys who gets in and he plays better than what you think he’s gonna play like. He’s not 6-5. He’s not 260. But he’s a good player. He’s a productive player. There’s a lot to be said about making plays on the field if you get on the field. That’s what he does. And there’ll be times this year he’ll be in there in the right situation.”