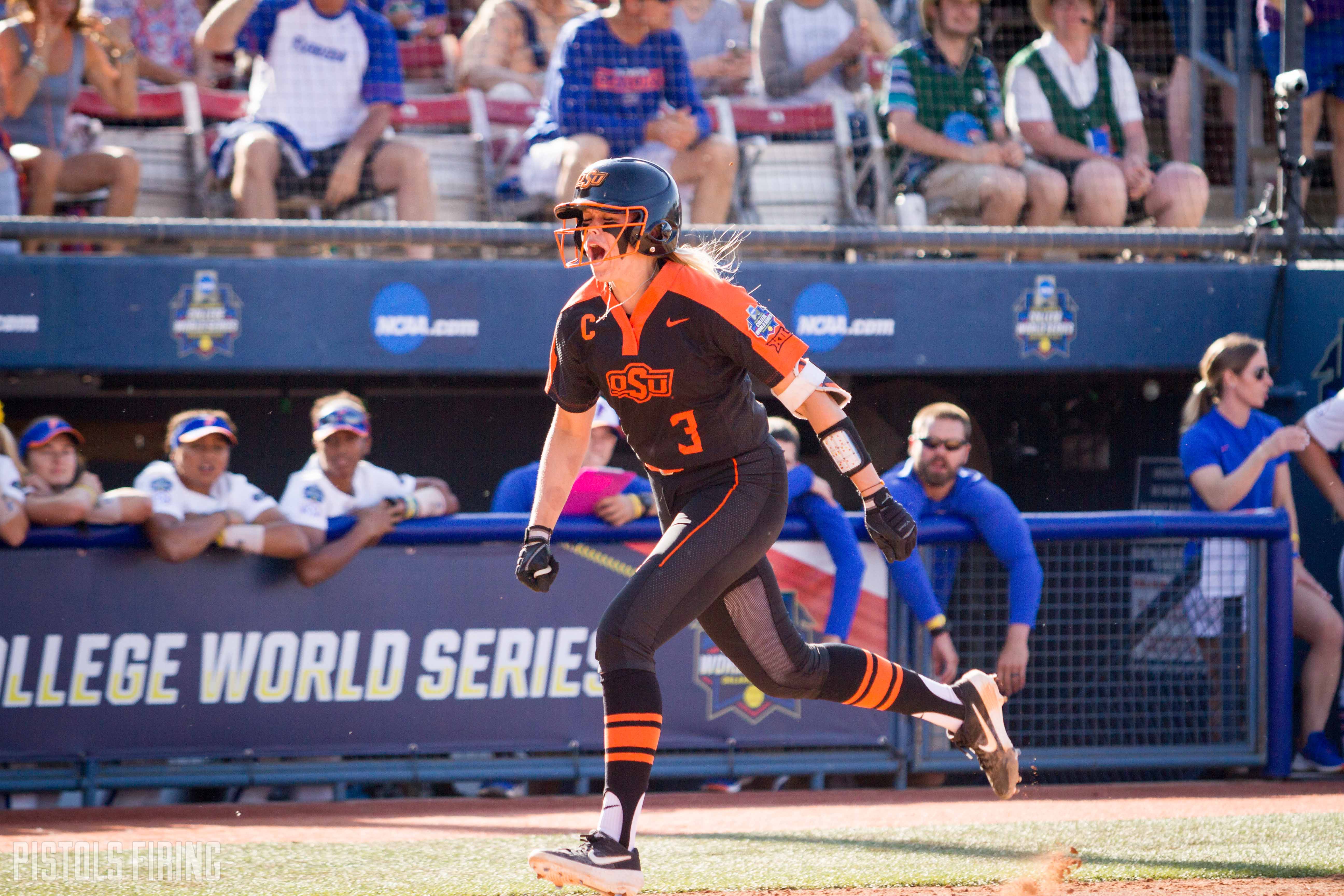 OKLAHOMA CITY — Outside of the bubble of Stillwater, Samantha Show has made her name known with her polarizing bat flips this season, but Thursday night she went from polarizing home-run hitter to national star.

The Oklahoma State softball team defeated Florida 2-1 on Thursday in the first round of the Women’s College World Series, and the Cowgirls’ senior transfer from Texas A&M stole the show. Show hit two home runs (OSU’s only hits) all while pitching every inning in the circle. Here are three thoughts from her ridiculous performance.

Samantha Show spiked her bat in the ground with such force that it carried end over end to the Cowgirls’ dugout.

In the top of the sixth, Show sent a 1-0 pitch screaming into the bleachers beyond the center-field fence, giving the Cowgirls a lead they wouldn’t relinquish. It was her second home run of the evening, and her home runs were the Cowgirls’ only two hits of the game.

“So anything that happens after a home run of mine, I don’t plan out,” Show said. “Just whatever emotion I have inside me. Normally I have so much that’s why the dramatic bat flips happen because it just needs to come out. I’m very emotional.

“I actually hit one of our managers. I said sorry. But after I threw it, I was like, ‘Oh, crap.’ It just kept going.”

Show got the game going in the first inning, blistering her first home run to right-center field. The home runs were No. 19 and 20 this season for Show, that’s the most in a season in school history. She also becomes the second pitcher in WCWS history to hit two home runs in the same game, along with UCLA’s Megan Langenfeld in 2010.

While at Texas A&M, Show played the Gators 10 times. A&M won only two of those games. Show had two career home runs against Florida entering Thursday’s game, including one against Kelly Barnhill, who started Thursday’s game for the Gators.

“(Show is) either loved or she’s hated,” OSU coach Kenny Gajewski said. “She’s brought a little bit of that on herself. She wears that. She doesn’t want that. She really does, like everyone, wants everyone to love her. But she knows she brings that stuff on. I’m proud of the way she’s handled that. There’s some people that are very critical of her, some people she’s looked up to for a long time that have been very critical on social media and stuff like that. Some of them kind of swayed back, some continue that.

“I mean, when you bat flip, you pump your fist, it’s going to happen. It’s just not normal in our game. It may become that way in years to come, it may not. But you have to make a choice in life in who you want to be. What I told her is, ‘Just be you, don’t change for anyone. Don’t let anybody sway you. Don’t be disrespectful.’

“People in this game act like there’s some kind of softball code. If you can find that code book, tell me, I’ll read the book. I love to read and grow. There is no code. She loves to play. She loves this school. She loves these girls that are on our team. Sometimes her emotion gets the best of her. I cry. She throws bats. I don’t know what else. We all have our own ways of letting things out, right?”

2. Show in the Circle

Before Thursday, Show had been in the circle five times against the Gators, and none had went particularly well.

In those outings, Show through a combined 10.0 innings allowing the Gators 19 runs off 20 hits to go with 10 walks and five strikeouts with a 12.6 ERA. Thursday went significantly better, as Show held the No. 5 team in the country to one run off six hits with no walks and two strikeouts.

“I don’t think she’s a different pitcher,” Florida coach Tim Walton said. “I think she’s a whole entirely different person. You look at everything about her, it’s different, better in every sense of the word. She’s just done a good job all the way around. It almost looks like she’s completely comfortable in who she is right now competing both offensively and defensively.”

Show’s stickiest situation came in the game-deciding seventh. After allowing back-to-back singles to start the inning, Show forced a grounder to shortstop, and Kiley Naomi tossed it to third for the force out. Then Jordan Matthews grounded into another fielder’s choice, this time at second, putting runners on the corners with two outs.

From there, Gajewski took a visit to the circle as Eminem’s “Lose Yourself” echoed throughout Hall of Fame Stadium. In that moment there were undoubtedly many hands sweaty, but not Show’s. Show forced a groundout to Madi Sue Montgomery at second to give the Cowgirls their first WCWS victory this millennium.

“Yeah, so I knew that if I worked ahead and threw some quality pitches, my defense would make the plays for me,” Show said. “It’s exactly what they did. Some really good plays made behind me. Never in my mind did I think we were out of it. They had runners in scoring position, but I knew even if they did score, it wouldn’t be over. We would go back, have good at-bats, hopefully score again. But there were no doubts in my mind.”

3. Is This The Greatest Single-Game Performance in OSU History?

Softball might not be as big a deal in the eyes of many as football or basketball, but we might have just witnessed the greatest single-game performance regardless of sport in Oklahoma State history.

Mario Boggan scored 37 points, ripped down 20 rebounds and hit a game-winner in triple overtime against the Kevin Durant-led Longhorns in 2007. That’s a ridiculous task on a high-pressure stage, but what Show did was on nearly the highest-pressure stage the sport allows. Thursday is like if Boggan would’ve done that in the Elite Eight.

There are still more games to come for Show and the Cowgirls, starting Friday night. Maybe they win this World Series and Show’s legend grows even more this weekend or maybe they don’t. But in the span of about two hours, Show set a legacy for herself and her team in front of a national audience to the extent that I’m not sure another OSU athlete has ever been able to match.

“I’m super excited for her, but I’ll be honest, she doesn’t care,” Gajewski said. “She wants this team and this program that gave her kind of the second chance, she was a star when she got here. Her first year at A&M, she was unreal. She was a bona fide star. She’s a bona fide All-American. She’s one of the best players in the country.

“She is a star. She’s done everything we’ve asked her to do here and more. She leads. Our young kids follow her around like little ducks. She treats them well. They love her. She coaches them up. She’s also willing to take coaching from them. I think that’s what great players do.”