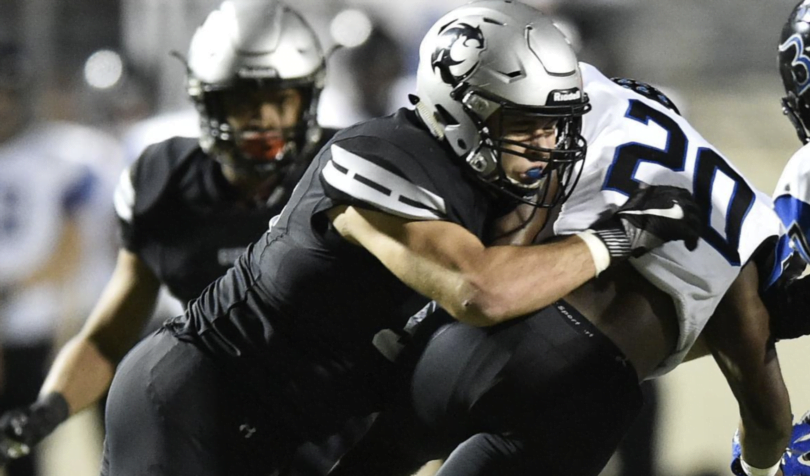 Kyle Boone recently wrote two great posts on who might take up the scholarship spots on offense and defense for Oklahoma State in 2020. Three of these prospects he mentioned, Eli Russ, Grant Mahon and Jabbar Muhammad, have already committed to OSU. These three guys all committed between April and late July of 2018, so it’s been a little while since we have talked about them in detail. In fact, two of them committed before I joined PFB, so I haven’t had a chance to write about them much at all.

I thought it might be a good idea to go back and provide an in-depth look at what these guys can bring to the table and where they fit on this Cowboy team moving forward. I’ll kick things off with defensive line prospect Grant Mahon.

The Denton, Texas native was offered by Oklahoma State in March, then took an unofficial visit to Stillwater a few weeks later. In late July, Mahon announced his commitment via Twitter, making him the most recent commit in Oklahoma State’s 2020 recruiting class.

The young defensive lineman is looking to bounce back from a fractured vertebra which caused him to miss all of last season. Mahon had a solid sophomore campaign before his injury, recording 43.5 tackles, 5.5 tackles for loss and 2.5 sacks from the defensive end spot.

Top Offers: According to both 247Sports and Rivals.com, Mahon’s only offer is from OSU. Minnesota has apparently shown some interest, but due to his early commitment and missing all of his junior season, he hasn’t received any additional offers.

As I mentioned above, during his sophomore year Mahon mainly played the defensive end position, but he projects more as a defensive tackle at the next level. His coaches at 6A Denton Guyer believe he is more naturally fit to play on the interior of the defensive line and was only playing defensive end out of necessity.

He’ll need to put on some weight to get to the size and strength of a typical OSU defensive tackle, but he has a great frame to build on at his current 6-4, 270 pounds. He has the bull rush down and uses his hands well to get by opposing offensive linemen, as you see below.

The way he’s able to push through blockers reminds me a little of former Cowboy DT Darrion Daniels.

Mahon also has good quickness and agility for a guy his size, as shown in the following clip.

Overall, the Denton Guyer product is very physical and has great balance for a defensive lineman. He doesn’t have elite mobility, but as I mentioned earlier, he has some speed and always seems to be in the right place at the right time. The only question now is… how will Mahon recover from his back injury?

It sounds like he’s on track to make a full recovery and is working through rehab right now. If he’s not able to play, GoPokes.com’s Robert Allen notes that the Cowboys will not lose that scholarship.

“Everything I have been told with Coach Walsh is Mahon is expected to be back to 100 percent. His surgery went well and he is a hard worker. We’ll see because if he can’t make it back then Oklahoma State will still take him but on a medical scholarship and not athletic and will use that spot for a student-athlete that can play. You won’t lose a spot, either he will be back and can play or his scholarship will be accounted outside of football.” [GoPokes.com]

If Mahon is able to fully recover from the fractured vertebra, I think he possesses the talent to be a solid piece for Oklahoma State moving forward. Defensive tackle is currently not one of the Cowboys strongest position units, so adding a skilled player like Mahon will be a major plus.

Below are Mahon’s highlights from his sophomore season.