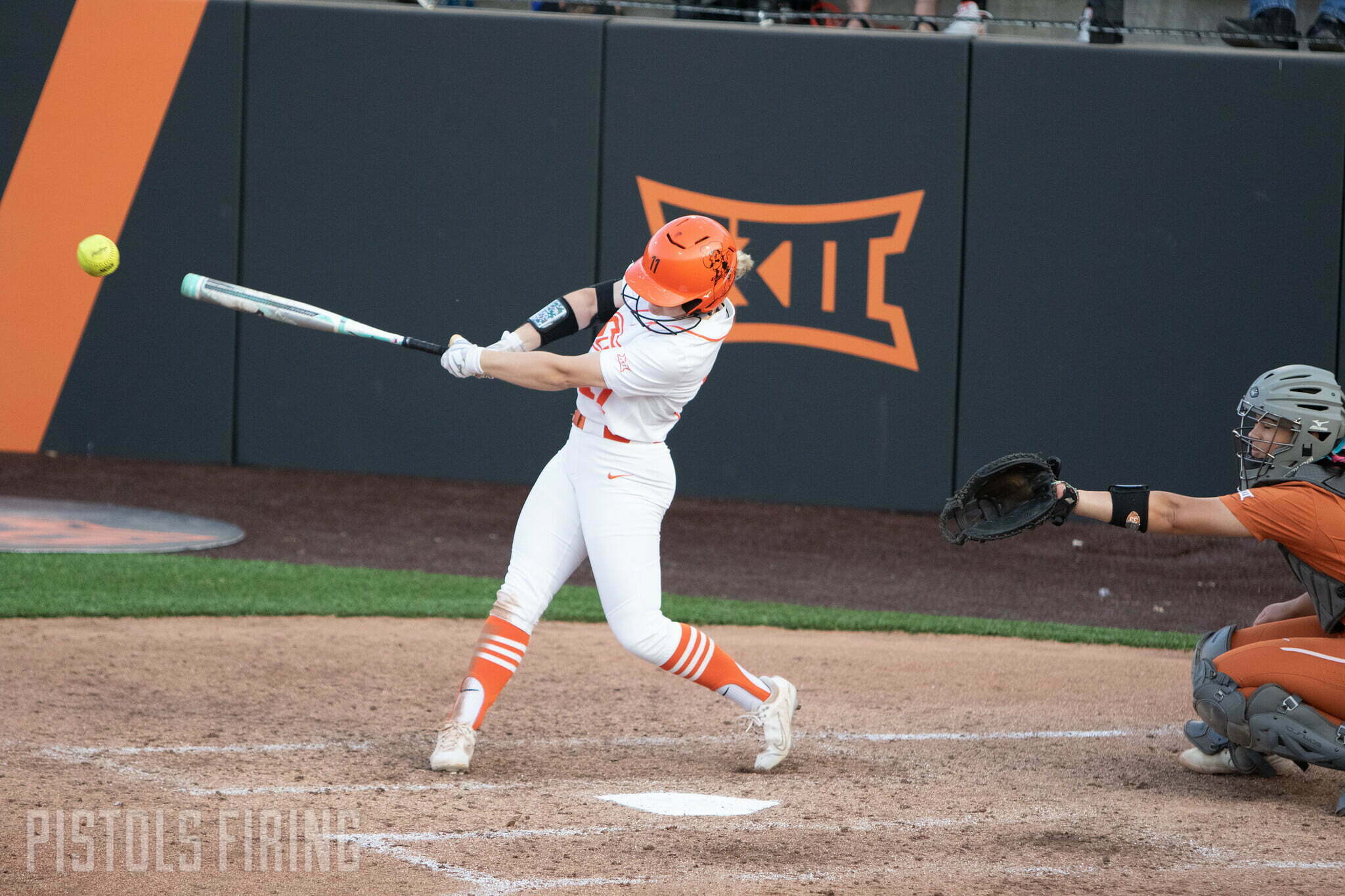 STILLWATER — The stakes for the Bedlam softball series have grown over recent years, and this weekend will raise that bar a little more.

Oklahoma State and Oklahoma will play three nationally televised games on Thursday, Friday and Saturday in Norman. The winner of the three-game series will also take home the Big 12’s regular season crown. At 45-1 on the season, the Sooners enter as heavy favorites, but the Cowgirls have inched closer and closer under Kenny Gajewksi to the extent where OSU took a game off the Sooners last season.

The No. 6 team in the country, OSU has made the Women’s College World Series twice in a row, but Gajewski said this week that the team has recently had to recalibrate its mindset from the hunted to the hunter. Although getting to Oklahoma City is cool, Gajewski said there isn’t anything for the Cowgirls to defend, but there is something to take.

“I don’t think there’s anything that we have that Oklahoma wants, to be very honest,” Gajewski said. “We have better uniforms. I know that, but that doesn’t win games. Our uniforms are way better, for sure — more options, they’re really cool. But, I don’t think they really care about that. They have what we want, and we have to go take it.”

There is no question this series has the Big 12’s two best teams in it. Sure, both have dropped a single conference game — OU fell to Texas on April 16 and OSU dropped a game to Iowa State on April 9. But, look no further than the pitching to prove the Big 12’s best will be on display this weekend.

The Big 12’s top six pitchers in terms of ERA play at either OSU or OU.

There is a question mark in OSU’s pitching staff entering the weekend, though. Miranda Elish has an injured tendon connected to her bicep, Gajewski said. She hasn’t pitched in a game since her April 24 outing against Texas.

Elish also leads the Cowgirls in batting average with her .378. She was used as a designated player in OSU’s second game against Florida State this past weekend, her first action since April 24. OSU’s chances of success could heavily depend on whether Elish is not only able to pitch but how close to her normal self she is.

“We’ll see,” Gajewski said. “She threw [Monday]. We’ll see how she bounces back [Tuesday]. I’m kinda mad at myself looking back that I didn’t let her hit the first day [in Tallahassee], trying to protect her, trying to do the right thing. She wanted to fight me. When I told her she wasn’t going to play, she cried and then came up and gave me a hug. It’s just her competitive spirit is wacky wild.

“I can’t give you an honest answer. I don’t know if she’ll pitch.”

As with all things Bedlam since the announcement that OU and Texas are leaving the Big 12 for the SEC, many questions have flown around as to whether the series will continue once the split happens.

Tulsa World columnist Guerin Emig wrote an excellent piece Tuesday breaking down thoughts from Gajewski and OU coach Patty Gasso on the topic. Gajewski made his thoughts clear Tuesday that he wants Bedlam to continue, noting that his Cowgirls aren’t running from anyone. Gajewski has some walk to back up that talk, too. OSU used it’s open week to go play a Top 5 Florida State team in Tallahassee last weekend.

“You’ll have to ask Patty that,” Gajewski said. “We don’t run away from anybody. I don’t know why we wouldn’t [continue the series]. If they want to play, we’ll be right here. And if we’re gonna play, we’ll do it fairly. We’ll do it there and here or one year there and one year here. We’ll do it right. They don’t hold anything above me or us.”