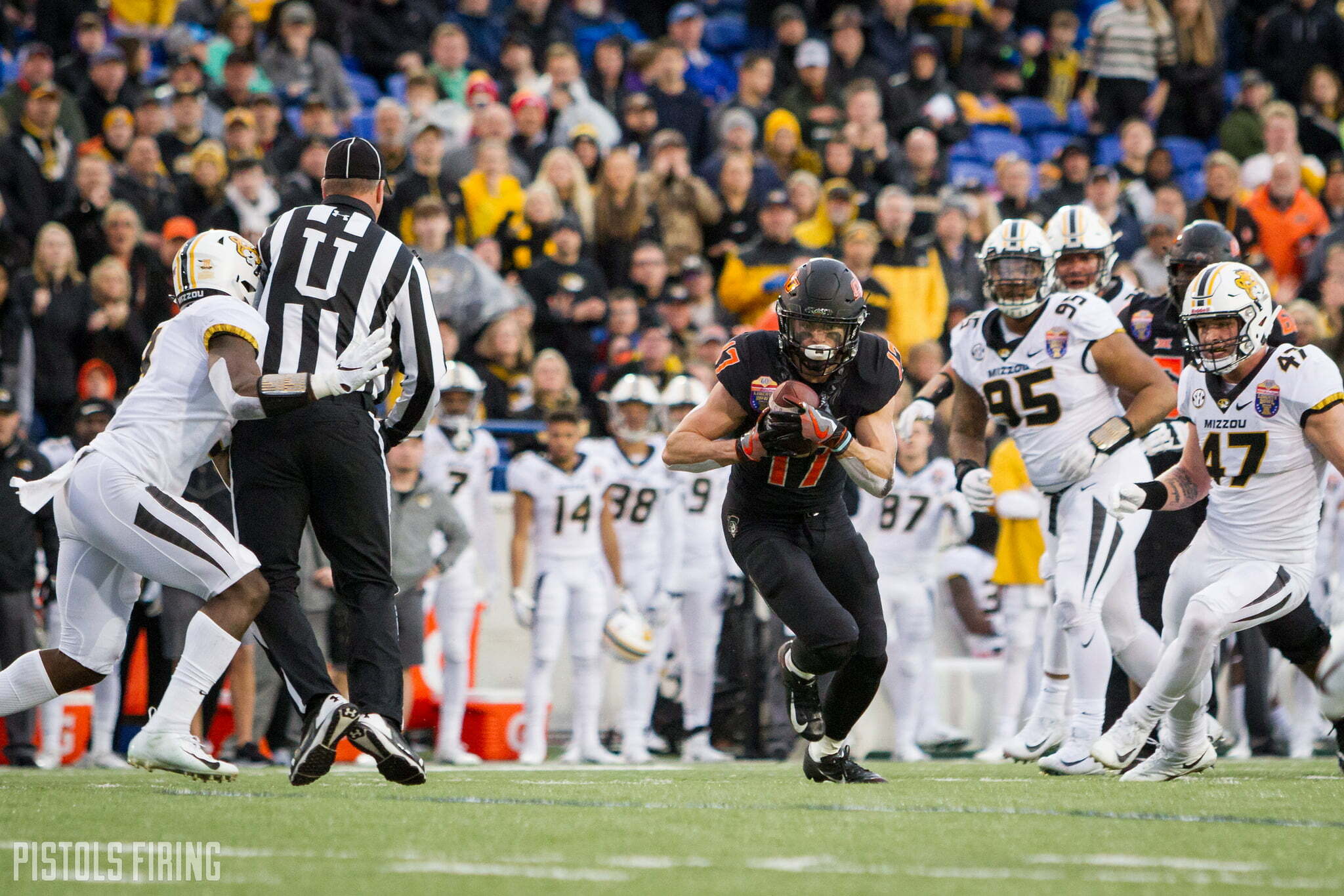 Kyle, Kyle and … well … I Slacked it up on Thursday to talk about the myriad things going on in Oklahoma State world right now. Between the OC position, how 2019 could unfold on the field and what to look forward to about hoops, there was much to discuss.

Porter: Let’s start with some ? — is Chuba > Justice a real thing?

Cox: I don’t think so. Not yet, at least. Maybe he will be but Justice has some moves they don’t teach in Canada. I’m kidding about that. But double jump-cut, stiff-arm only exists in video games and on Justice runs.

Boone: As the proprietor of this movement, I feel obligated to say yes. However, I think we are a long ways from that becoming a reality. He does a lot of things really well, but so did Justice. It’s possible that seems not-so-crazy after the 2018 season, during which Justice was on a pitch count every game and Chuba suddenly emerged as a quasi workhorse back.

Cox: But Chuba has a much better offensive line blocking for him, I think. One year older as well (in college years), and wasn’t asked to shoulder the burden Justice was for nearly as much of the season. All that being said, I’m stoked for Chuba’s sophomore season.

Boone: Pump the brakes, mahduuuuuude! Justice’s offensive line was significantly less impressive (like Cox said) as a true freshman than what Chuba ran behind this year. Also, Justice was like five months removed from prom when he made his first start. Chuba at least had the benefit of redshirting and had a moderately improved/not horrible offensive line. When Justice took over, the run game was BA-LEAAAK.

Porter: What if I told you Justice’s numbers did not change his sophomore year (i.e. what would have been his R-Fr. year)?

Porter: Fake news — OSU played like nine guys on the OL this year.

Cox: Justice just looked like a dude from Day 1. Chuba also passes the eye test. But Justice also basically outplayed the NFL’s No. 5 rusher this season.

Boone: Just because OSU had a bunch of different dudes up front doesn’t mean the OL as a whole wasn’t better!

Porter: How do we live in a world where I’m trying to talk you — Boone, of all people — INTO Chuba.

Cox: Chuba is awesome and will be awesome but Justice is a top 5 RB (at least) in OSU history.

Porter: Are we sure Chuba’s not going to be that?

Boone: I’m 1,000% into Chuba being great, I just think it’s maybe a little premature to crown him as better than Justice at this point.

Cox: And Chuba will never have the benefit of revitalizing a crappy running game like Justice did. Might hurt his legacy in that regard.

Porter: Yeah I agree. I’m just here for the friction. OK give me odds on Gundy hiring outside vs. inside the OSU program for offensive coordinator.

Cox: 2-to-1? I have no clue. I feel like Boone came up with as good of a list as anyone could, but I would not be surprised by anything at this point. (edited)

Boone: I think the OC situation is … fluid. If Monken miraculously gets passed over as an NFL head coach, I think OSU could be in a good spot to welcome him back. But I don’t think that’s likely at this point. Right now I’d say Henson should maybe be the favorite in the same tier as Graham Harrell, then Kasey Dunn, then Bodie Reeder. Maybe in that order.

Porter: I think it’s going to be an inside job. I think Gundy doesn’t want to deal with all the hoopla of having to formally interview from the outside and stuff like they did last year with Knowles. If this year was any indication he’s going to text Henson that the job is his and let somebody else hire a 10th assistant.
You think it would be miraculous if Monk got passed over as a head coach?

Cox: If that’s true, what does that say about Mike Gundy as a head coach?

Porter: It says he hires like he recruits. Or rather he has started hiring like he’s started recruiting.

Boone: Let me rephrase: I think it’d be miraculous if Monk didn’t get an NFL gig, be it head coach or OC. Returning to the college level for him would be a little surprising to me.

Porter: I agree with that.

Boone: I don’t think Gundy wants to stay in-house just because it’s more simple, but I do think he values continuity a lot — as we have said all along — and that may be the most valuable trait he’d find with Henson or Dunn or both.

Cox: I think the recruiting thing is more this is how I do it and being stubborn than being lazy. If he just doesn’t want to mess with the interview process then he should give back his latest raise and plan his successor.

Porter: Yeah I probably went a little far. Does the Liberty Bowl change your expectations for 2019 or nah?

Boone: Nah on Liberty Bowl changing expectations for me. Good win. But still a lot of question marks next season. At QB, at RB (behind Chuba), at WR (behind Tylan and Tyron), and then the defense as a whole is still a mystery.

Porter: Not at WR! They’re loaded! I feel like everyone is kind of willfully ignoring that all six defensive linemen who started a game in 2018 are gone. That ain’t great.

Cox: I predicted they would win the bowl game (*takes a bow*) but it doesn’t change my expectations for next year at all. OSU wanted it more and Mizzou was overrated.

Boone: They’re loaded, yes, but who is the third guy? Stoner? Then who?
There is like 50-60 catches to be had by one of CJ Moore, Pat McKaufman, Dillon Stoner on the table, IMO. Even accounting for Tylan to catch like 90 balls.

Cox: I hope that the fact that they stuck with Corn all year was stubbornness and not because neither Sanders nor Brown could push him. That would be not great for OSU. In fact, if SS doesn’t come out of spring camp as the favorite, I think that’s a huge disappointment. That may be obvious, I guess.

Cox: But who will be the spring game star receiver? That’s what I want to know!

Porter: They return all but 15 receptions by wide receivers in 2018, and all 15 belonged to Jalen.

Porter: Factually incorrect information! (Ed. note: I did not see that Boone included Stoner on his original list of guys who will catch those extra 60 balls … whiff).

Porter: So you think CJ and and McKaufman pushing into the WR rotation is a question mark or a negative thing?

Boone: It’s obviously a good thing. But it also means that Landon Wolf being the No. 3 would be semi-stunning to me. Those guys will have bigger roles and some of the other guys may be squeezed out of looks.

Porter: Boone in August: Does Spencer Sanders Have Too Many Weapons?

Boone: If Spencer is the QB I won’t care if he’s throwing to CJ Moore or Sione Finefeuiaki.

Porter: Haha. Ok last one. Since it’s clear that OSU is going to be lousy in basketball, what’s your biggest development storyline? That is, which young player do you want to see emerge to play a role on what should be a much better team in 2020?

Cox: Yor Anei should just get better with experience and he should be OSU’s defensive anchor of the future. Just continued growth and development from him. Shot blocking, good defense and a soft touch around the rim mesh well with anyone. He has all three.

Boone: Maurice Calloo. I’m not even sure how much PT he’ll get, but he’s an underrated frosh with gobs of potential. Even if he’s only a rotation player by next season, I think his upside by, say, 2020/2021 is really the most underrated.

(I realize that sounds insane)