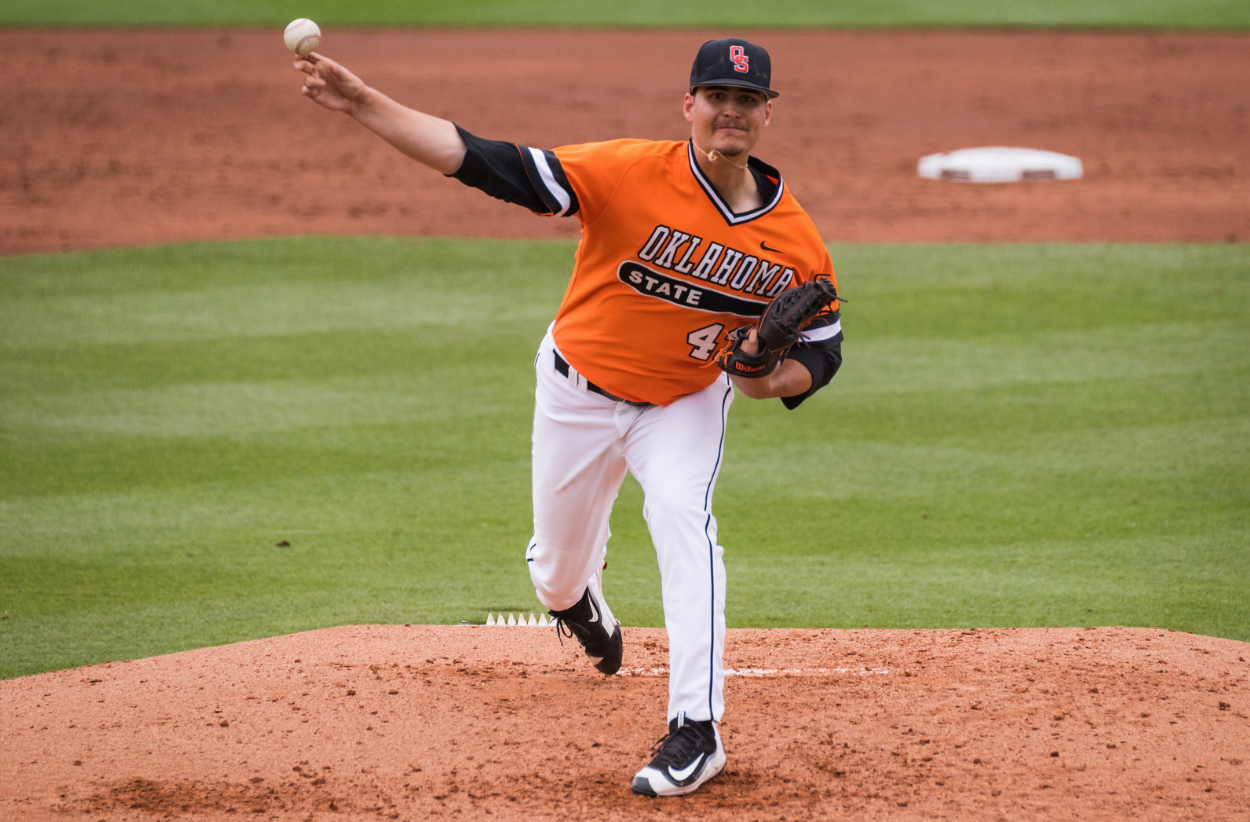 The Cowboys, finally, were able to play in Stillwater after a series of rain delays. Oklahoma State’s baseball team upended Marist on Saturday, winning 5-3 thanks to strong performances from Jonathan Heasley and Matt Kroon. Here are a few takeaways from the game.

“It feels good to have those first two under your belt, for sure,” Heasley said.

OSU manager Josh Holliday said Heasley, a sophomore, has made major strides mentally from last season to this year, saying he’s much better at making adjustments and managing his emotions while staying within himself on the mound.

“I think last year as [a] freshman he did some great things, and at times, the emotional things like that would take away from his game,” Holliday said. “And I think now he’s using his intensity and his athleticism to his advantage rather than letting it speed him up.”

“There’s a whole other gear that he’ll hit and continue to extend those outings to seven or eight innings. I’m proud of John. It’s a big responsibility when you’re asked to pitch first each week.”

Matt Kroon is on a mission. After bouncing from Oregon to Central Arizona, he seems to be happy in Stillwater. He was OSU’s top performer Saturday, going two-for-two with three RBIs. His first hit was a double, and his fifth-inning home run put two runs on the board for OSU. He also got hit by a pitch twice.

“It’s kinda cool to see the smile, the moment, his first run across home,” Holliday said. “It gives the team confidence, it gives the team energy. It creates smiles and celebrations, which are things that these guys really feed off of. Positive energy is contagious. That’s great to see and now we need to continue to get more guys on that positive energy train.”

Kroon said the players in OSU’s clubhouse have become his best friends during the past seven months or so.

“He’s a guy that’s had some high-level success at times in his career,” Holliday said. “He’s on a little bit of a mission to recapture that. So I think that’s a healthy place to be as a young athlete.”

If it weren’t for Mother Nature, the Cowboys would have three home games under their belts. The initial home opener was supposed to happen Tuesday against Oral Roberts, but inclement weather led to the game’s cancellation. The three-game series with Marist was slated to begin Friday, but once again, weather didn’t allow the teams to play. Allie P. would have played host to a doubleheader Saturday had it not rained in the morning.

“The anticipation is always there; it’s always high,” Heasley said. “This morning we showed up at 9 at the field, ready to go, and then they sent us back home for a couple of hours.

“It’s hard to adjust, a little bit, but at the same time we just have to stay focused and be ready to go whenever they tell you, ‘It’s on.’”

Here are some other tidbits from Saturday’s action:

• Cameron Dobbs had an incredible, web-gem worthy catch in the top of the ninth. Take a look.

That boy got hops!! @camerondobbs8 with the web gem on this 9th inning line drive to rob Marist of a hit! #GoPokes #okstate pic.twitter.com/7Z3HtKCItE

• It was cool to see people drinking beer at a baseball game in Allie P. I didn’t see anyone throw up or get kicked out, so that’s a good start.

• We gotta establish an over/under for how many games that takes to happen. I’ll set it at 5.5.

• After a hot start against Texas State, Colin Simpson went 0-for-4 Saturday. He did get an RBI on a fielder’s choice, however.

• Carson Teel earned his second save of the season, and he was efficient in doing so. He mowed through three batters with 15 pitches, striking one out.