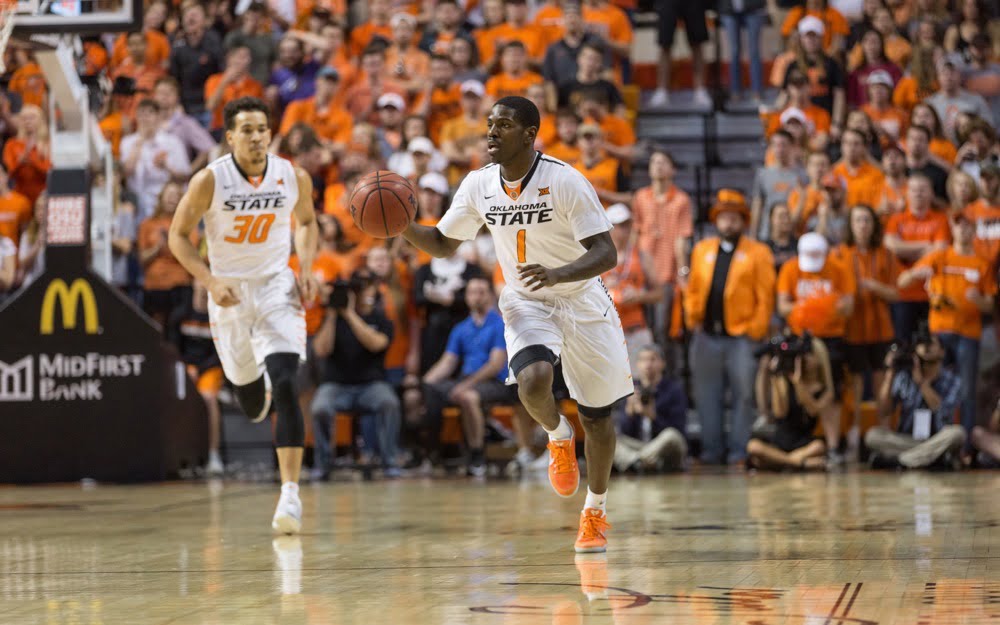 Up this week is a Wednesday trip to Fort Worth where the Pokes will take a swipe at moving up the Big 12 rankings against an upstart TCU squad, followed by Bedlam in Stillwater.

This Oklahoma State ball club is on pace to be the second-highest scoring squad in Big 12 history behind only the 2001-02 Kansas team that averaged 90.9 per game.

Offenses with Blake Griffin, Kevin Durant, Michael Beasley, T.J. Ford and the Morris twins won’t end up being as efficient as this one. So what’s behind the curtain?

So many things contribute to the success of the offense: Underwood’s system, the emergence of Jeffrey Carroll, King Forte owning the three point line and Mitchell Solomon ruling the boards. The Cowboys ran up 84 points on Texas, a defense giving up 69.1 per game on the year, a defense built on pressuring you into bad decisions with lots of athletes.

A steady dose of offense the Cowboys have leaned on this year is the free throw game, shooting a league-leading 25.8 per game. But that wasn’t the case on Saturday as OSU only shot eight. So how’d they get into the 80s against Texas?

I’d contest the answer is a healthy mix of good ball movement/giving Jawun lots of leash (in conjunction with another other-worldly shooting performance).

The Pokes had 18 assists against the Horns, highlighted by plays like these:

HIGHLIGHTS: Check out how the Cowboys put together last night's 84-71 win over Texas in GIA today. #okstate pic.twitter.com/iZYntdBTYp

Things just looked easy on Saturday as the Pokes offense was flowing naturally with unselfish guys. Five guys reached double digits, and you could see shades of that West Virginia offense. Shots weren’t forced and guys were aggressive in correct proportions, trends that we hope continue in the coming week.

Coach Underwood raved about Jawun post-Arkansas for good reason, the offense flows so much better when he’s on the floor. And right now he’s playing impeccably.

I thought he was incredible today. Eight assists, seven rebounds, it was his floor game and the passes up the floor. He got us off to an incredible start. My goodness was he good today. Jawun is the straw that stirs the drink.

Early in the season, Jawun was plagued with foul trouble and some minor injuries that he didn’t seem to bounce back from until a few games into Big 12 play. We learned that having No. 1 at the point is comparable to living at a vacation destination — tough to appreciate while you’re there, but painfully apparent once you’re gone. He took the KenPom MVP in four of the last six games.

Offensively, what things excite you most about this team? Here’s my best guess:

Jawun is a darling both statistically and to the untrained eye. He’s second in the league in scoring (18.0 a game), second in assists (5.5 per game), fourth in steals and what I contest may be most important: eighth in assist to turnover ratio (1.9 assists to 1 turnover). He plays point guard for 80 percent of OSU’s offense while putting up KenPom’s 10th-best assist rate in the country. For the extraordinary burden he bears, he’s incredibly efficient and productive.

One of my favorite things to watch in a game is how he’s nearly always in the right place at the right time. He is 72nd in the country in KenPom’s steal rate, fast breaks start with the ball in the smartest Cowboy’s hands.

Think about the OU game winner alone: Evans stole it and made the diving out-of-bounds pass that landed in Forte’s hands. It’s no wonder the guy is considered one of the nation’s top 30 players.

If anybody ever does a highlight reel for Jawun’s dimes and Dillard’s dunks, I’ll be KO’ed faster than Huggy losing at home.

There are almost always more McDonald’s than McDonald’s All-Americans in Stillwater, but boy do we enjoy this one.

After taking on No. 9 Texas, up next are the No. 8 (TCU) and No. 10 (OU) least-efficient offenses in the Big 12 (followed by No. 7 Kansas State and No. 6 Texas Tech). For a Cowboy defense shy on rim protection and overall length, it’s a timely opportunity get some momentum prior to finishing with some offensive powerhouses in Kansas and Iowa State.

OU shoots a league-low 41.5 percent from the field, not a lot of Buddy Ball being played in Norman these days. And Sunday the Sooners got some sad news as senior Jordan Woodard, OU’s key offensive player is done for the season. A really good player who will be missed there.

And while TCU’s length makes them a bear defensively, their three point percentage is down there with Texas and there’s not a lot of fire power outside of the Eastern European big (KenPom’s 44th-highest offensive rating).

KenPom would have you believe these couple of games are winnable (one more than the other), the more difficult coming at a newly-renovated facility for a scrappy TCU team. OU has lost eight of their last ten and it’d be a real disappointment to lose to the last place team but who knows #Bedlam.