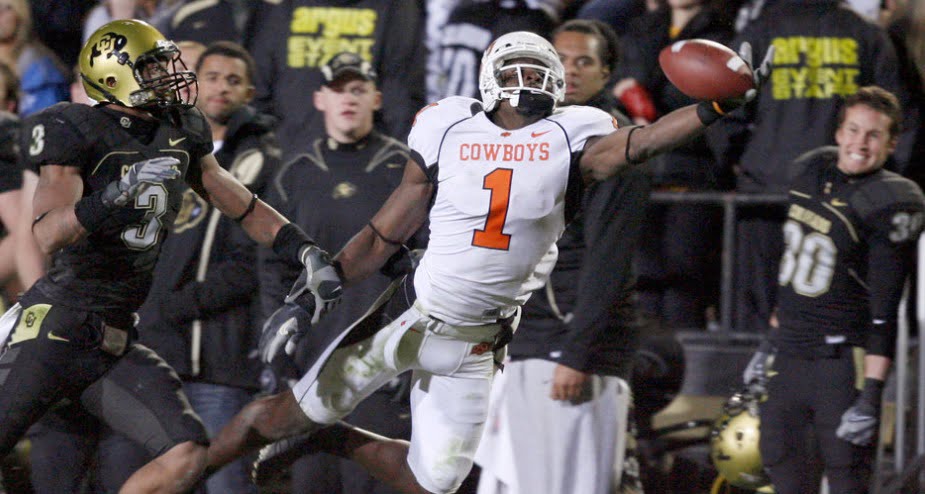 I don’t know why I thought about this game today, but I did. OSU went up to Boulder, Colorado in November 2008 and got its 9th win of the season over the Buffs 30-17. It was a homecoming of sorts for Zac Robinson, as the AP cleverly (and a bit savagely) pointed out after Robinson gave CU the Heisman coming out of high school.

“It was great to play in front of a lot of family and friends. And to play in this stadium that I grew up watching so many games in,” Robinson said. “It was fun. It was kind of an ugly win, but as long as we got it done, that’s all that matters.” [AP]

Robinson was 15/23 for 217 yards and a sick TD to Dez despite a laser pointer being shone on him throughout the game. He also ran 15 times for 61 yards and a TD.

“When they would get in a pickle, he’d make a great play,” Colorado coach Dan Hawkins told the AP. “He’s probably overshadowed a little bit by some of the other quarterbacks in the league. But he’s a pretty good player.”

This was oddly the only time Zac ever faced Colorado. OSU didn’t play them the previous year, and the next year he was injured when Weeden and Blackmon spawned a new era of OSU football on a Thursday night. But No. 11 wasn’t the only Poke who played well that night in Boulder.

Kendall Hunter had 11 carries for 102 yards and a TD. Dez had four receptions for 82 and that TD. And Brandon Pettigrew had seven catches for 75 yards.

“It was nice for Zac to come home and play well,” Mike Gundy said. “There was some talk about how he would handle it, but he did a great job.”

Highlights below start at 8:45.

Some crazy game notes excerpts from that night:

• Oklahoma State tight end Brandon Pettigrew made the 100th reception of his career in the second quarter. In doing so, Pettigrew became only the eighth player in OSU history — and the first tight end — to have 100 receptions in a career.

• Zac Robinson connected with Dez Bryant for a 29-yard touchdown pass midway through the second quarter that marked the first touchdown scored by Bryant in a true road game. He scored a touchdown in the Cowboys Insight Bowl victory over Indiana last year, but prior to Saturday’s game, that was the only touchdown of Bryant’s career scored away from Boone Pickens Stadium.

• Oklahoma State improves to 9-2 overall on the year and 5-2 in the Big 12. Prior to this season, the Cowboys had six nine-win seasons. OSU has won five or more conference games three times since joining the Big 12 in 1996.

A few thoughts on all of this.

• How many times are we going to swipe a strong QB from a state that isn’t Oklahoma or Texas? The list is lengthy and it includes Zac, Wes Lunt, Mason Rudolph, Jelani Woods and Keondre Wudtee.

• Remember when getting to nine wins was a big deal?