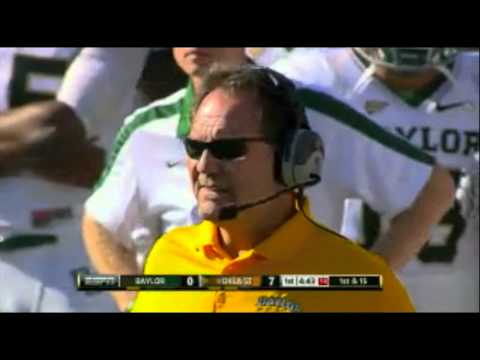 There are a lot of ways to define top ten lists. “Most important”, “best plays”, and “most shocking”, to name a few. This list is simply the ten plays that I’ll remember when I think about the 2011 season. In reverse order.

Whatever you want to say in a year or five years or ten years about this team, you have to say that it took all 85 guys (and then some) to get the job done. Staley’s story is one of redemption in a lengthy year of Cowboy football retribution.

I think in my mind this will always be how the Fiesta Bowl ended. There’s a horde of people that put $30M on the game that wish my fantasy was reality too. A former walk-on to former walk-on connection to end a nearly perfect season? That pretty much sums up Oklahoma State.

This one got…ahem…a bit lost in translation when looking back on this night. But a Sergio-like scissor kick down the sideline in double coverage and waltzing into the end zone? Fantastic.

What? You really thought we were going to go through the ten plays I’ll remember most about this year and Gilbert wasn’t going to be involved?

It’s bizarre to me that I have Jeremy Smith on a list that doesn’t include the guy who had the second most rushing touchdowns in school history (Randle). It wasn’t that I thought Randle was undeserving, it’s just that none of his runs were as memorable as this one from the latter half of the aptly nicknamed “Run & Guns” duo.

“We weren’t punting to the #1 pick.” Possibly my favorite quote of the season on the play that could have ended it prematurely. Big time call, bigger time throw.

Ahh Tracy Moore, possibly the least hype most talent ratio in the country this side of Kendall Wright. This catch during Weeden’s legendary second half rally was massive, especially since eighty one was busy coughing it up through the back of A&M’s end zone.

Possibly my favorite play of the year, if only because it came in the most exciting regular season game in recent memory. Klein and Weeden trading blows and #3 tried to go for the knockout punch here. Klein would answer but Randle would deliver it one drive later.

This was very much the most memorable play of the most important win of OSU’s season, not to mention Mike Gundy’s career. And fittingly it came from that horrendous defense OSU kept running out there week after week.

He was just…better than everybody else was.