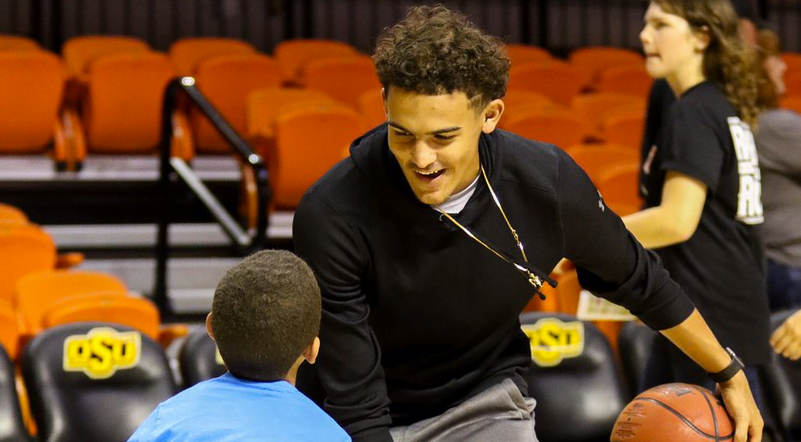 For as popular and well-known as Norman North senior point guard Trae Young is locally, his recruitment has been mostly under wraps. He hasn’t given indication he’s leaning toward one school over another, and he certainly hasn’t named any as a leader.

But he has dropped some hints about what he’s looking for at the next level. And even though his dad recently hinted that OU may not be a landing spot, it appears for now that all options on the table. Kentucky, Kansas, OU, and OSU.

“It seems like every day I change my mind,” the five-star guard told 247sports. “It will be Thursday and there will be a day that I feel I want to go to Kentucky, and then two days later I will think, ‘Oh, my gosh, if I stayed home, I could play in front of all my family and friends.’ It is crazy sometimes how up in the air I am. That is where my mind is at as I am trying to come down to this decision. I am just not 100 percent sure which school that I want to go to right now, and it is always a day-to-day thing right now.”

Although originally considering a commitment in the early period, Young has said he will wait until after the season to make his decision. He wants to see how teams finish the regular season, how he might fit in their respective schemes, and he’ll also get the luxury of seeing the roster makeup (with most players already committed).

As for a hint at his next destination, Young says he wants to go somewhere he can make an immediate impact.

“With my final schools the one thing that they all have in common is that I want to go someplace that I am needed,” said Young. “At all these schools that I am considering I am needed there in different ways.”

Depending on the point guard situation next season with whether Jawun stays or goes pro, Young would almost certainly secure a starting role. Heck, he could do it anyway with Evans on the floor, as Young could slot in at the two guard.

It would also give Underwood the luxury of choosing to run the offense with two point guards, or running a platoon system with him running one unit while Evans sits.

Right now, Kansas and OU are the leaders in the clubhouse for the in-state recruit according to 247sports crystal ball predictions. Oklahoma State has two guards — Amauri Hardy and Zach Dawson — but would take the commitment of Young as well should he choose to commit.