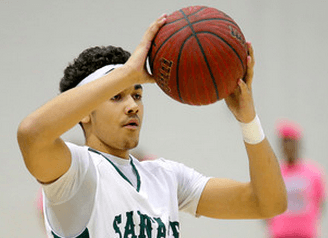 OSU whiffed on Texas big man Elijah Thomas on Tuesday but picked up an in-state guard as a consolation prize.

And I do mean consolation prize. Evans isn’t listed on any of the big recruiting services (ESPN, 247, Rivals) and isn’t considered a big prospect.[1. Of course neither was Justin Blackmon.]

Still, there’s a budding backstory to the commitment. Evans’ dad played at OU and so did his grandfather. So why did the third Evans commit to OSU?

“At first it was kind of frustrating,” he said. “But after OSU came after me, I felt like I just wanted to prove (OU) wrong. OSU is a way better fit. We’re coming up and gonna beat everybody.”

Sounds good. His dad, Terry, weighed in as well.

“Tre felt a little disrespected by OU, because they offered five other kids in the state. He wanted to stay close to home, and he feels like OSU is the right fit for him.”

Also, Travis Ford might be only trying to recruit dudes with the last name Evans — still awaiting confirmation on that.