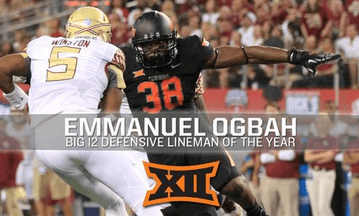 Tyreek was a shoo-in for the offensive newcomer of the year when he committed to OSU (or any Big 12 school).

Ogbah won the lineman of the year over Texas’ Malcom Brown (which didn’t please Texas fans) and Baylor’s Shawn Oakman.

I still think he sort of had one of the most historic lost seasons for an Oklahoma State defensive player ever.

And by lost I just mean on a better team Ogbah could have been Big 12 defensive player of the year and gotten more national recognition.