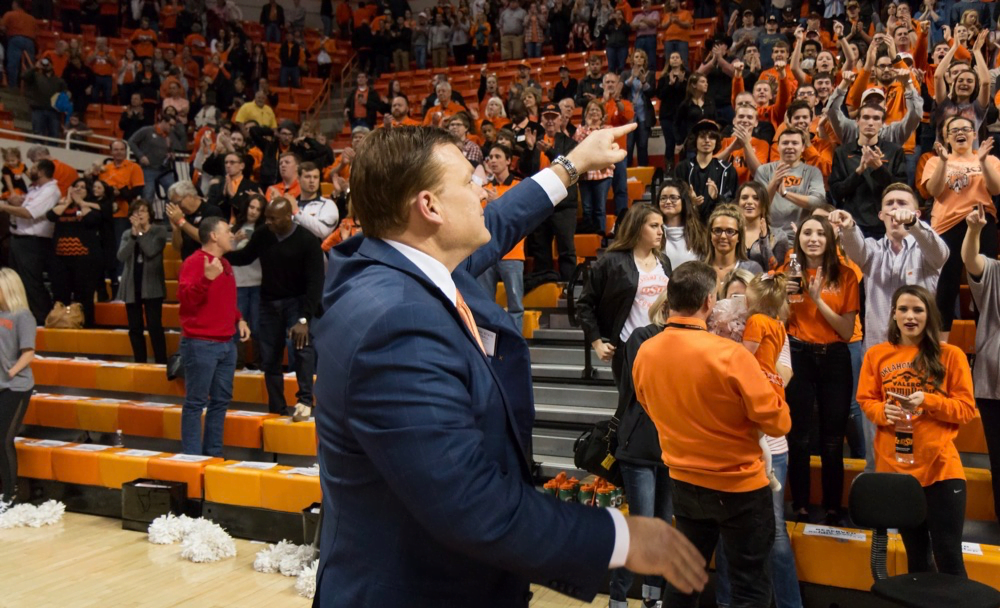 Despite the five-point loss on Saturday night to No. 1-ranked Kansas, there is reason to be optimistic about the future of Oklahoma State basketball. That much should be obvious.

First-year coach Brad Underwood took a team that went 3-15 last year in Big 12 play and built them into a 9-9 Big 12 team that nobody in the NCAA Tournament wants to play. That’s a good first step, but the work is far from finished.

In his first year, Travis Ford took over a team that went 7-9 in the Big 12 the year before he got there and led them to a 9-7 record and first-round win over Tennessee. We have been here before.

The difference this time, if there is one — and I whole heartedly believe there is one — lies in what will happen over the next 3-4 years. The kinds of players Underwood brings in to replace the Jawun Evans’ and Phil Fortes, both of whom I don’t expect to see in GIA again (although this is Forte we’re talking about, the NCAA might give him another three years).

OSU currently has the best adjusted offense in the country, which is exciting, but it also has the worst defense in the Big 12. They will have to get better in that area. Underwood knows this, and he knows that four sellouts in Year 1 is a big deal. Something Mike Holder touched on last week.

“There was an unbelievable buzz around Stillwater and around campus,” Underwood said after the Kansas game on Saturday. “I was so excited. This is just the tip of the iceberg. This is what this program can be and I believe that. Hats off to Kansas. This isn’t their first rodeo, they see this every night.”

They do, and hopefully they’ll be seeing the kind of crowd they saw on Saturday in Stillwater for the next decade.

Senior guard Phil Forte also chimed in on what he’ll miss about the future.

“Probably just the fans,” said Forte. “There’s so many great memories and so many great wins. I’ll miss taking the court with my teammates and hearing my name called when they announce the starting lineups. Every little thing and every little detail.

“Coming into the game, I was just trying to embrace every moment of it. I couldn’t have asked for a better five years. Thank goodness this isn’t the end of our season. We have more basketball to be played and there’s not another group of guys I’d rather go into the postseason with than our team right here.

“It’s kind of hard to pick one memory or one game in particular. But the fans were great today. We knew they would be coming in. We can’t thank them enough for coming out today and the past couple of weeks. They’ve been really great and they meant a lot to us throughout the season. We’re sorry we couldn’t pull out the win for them.”