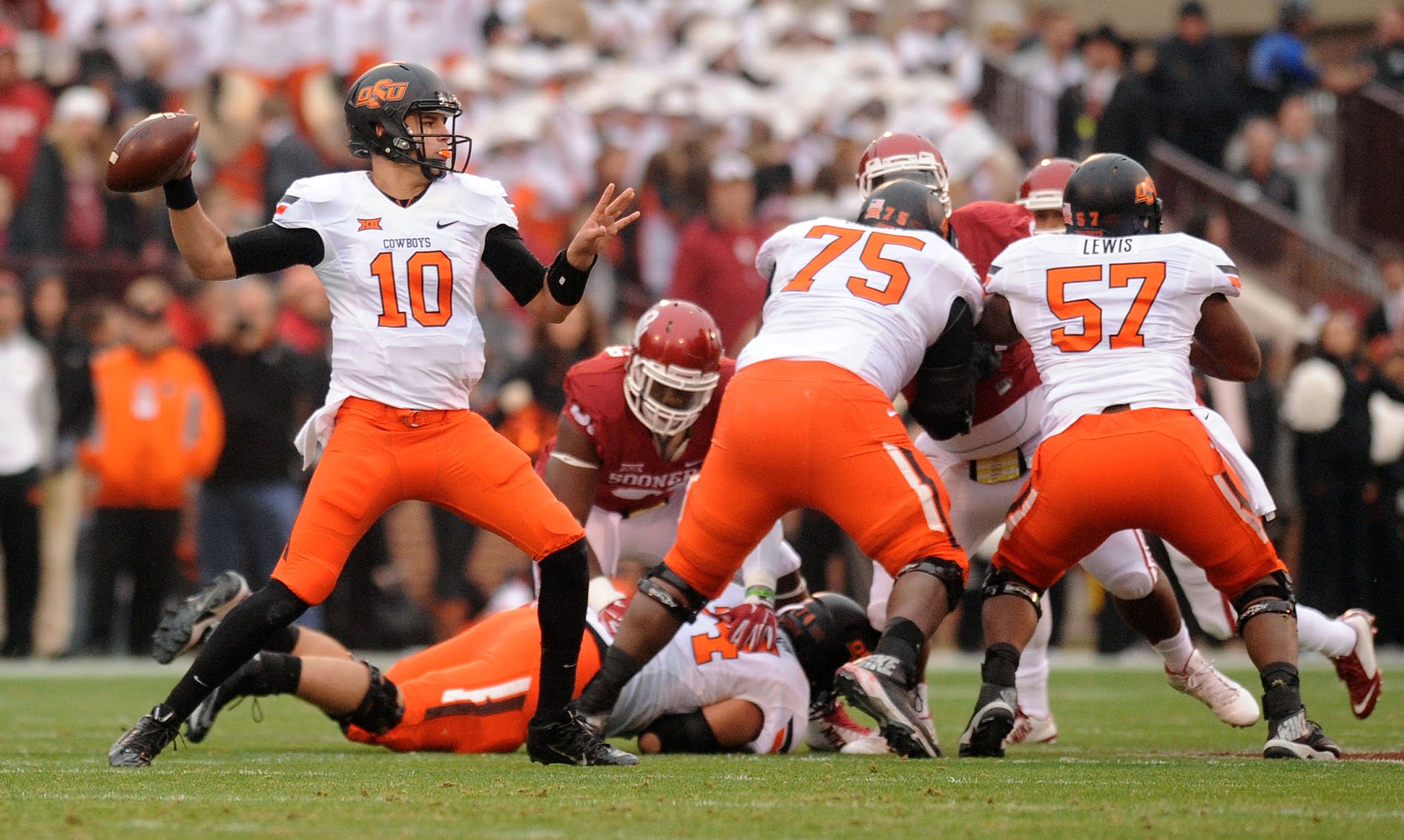 The curse is broken. (USATSI)

Porter: The Black-White-Orange curse has been exorcised forever! Can you believe that’s what they went with on Saturday?

Cunningham: I tweeted what OSU was wearing in pregame warm ups, then tweeted this. The two responses are funny.

It would be funny if #Okstate somehow wins in that combo, considering fans think it's cursed after 2011 Iowa State.

I was stunned, yet I kinda liked the decision. They wore a “cursed” uni care free. They played a Bedlam game care free.

But I must admit, I thought it would be the final time we ever saw the combo (I picked OU to cover -19, oops). Now it can be fully appreciated by all the superstitious fans out there. 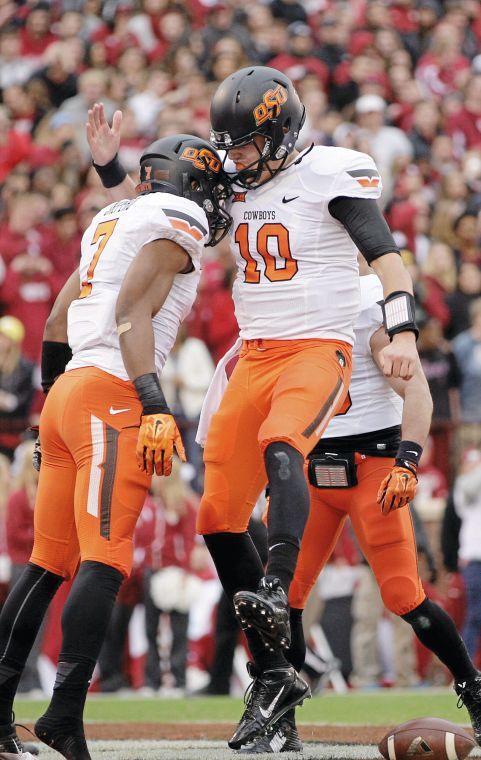 It’s the most “OSU” combo there is. It was No. 1 in my OSU uni rankings before Bedlam and it’s not moving.

Southwell: I was surprised to see that combo, mainly because we already saw the Phantom Pete version of it earlier this season. Is the curse gone, though?

2011: We were undefeated and looking to go to the national championship game.
2014: We were 5-6, hoping for a Bedlam victory and the chance to go to a bowl game.

I feel like the weight of 2011 requires one more solid victory in that combo before we can say the curse has been lifted. Still, I was glad to see it again, and extremely happy to see a Bedlam win.

I’m anxious to see what we will wear for the bowl game now.

Porter: I would agree, Justin, if that was against any team but OU.

The games have canceled themselves out though and black-white-orange is free to be the best uni combo in OSU’s deep arsenal of uni combos for the rest of its existence if ceded that spot by those ranking these things.

Actually, here’s a question — with the introduction of so many new helmets this season what’s No. 1 on your list of already-worn or hypothetical combos right now?

I think No. 1 for me is either the Bedlam 2014 combo (we’re calling it that now instead of the Iowa State combo) or a hypothetical Bronco-White-Black look that needs to become the de facto “at Texas uni.”

Also, did you guys see the Playoff unis? How would rank them? 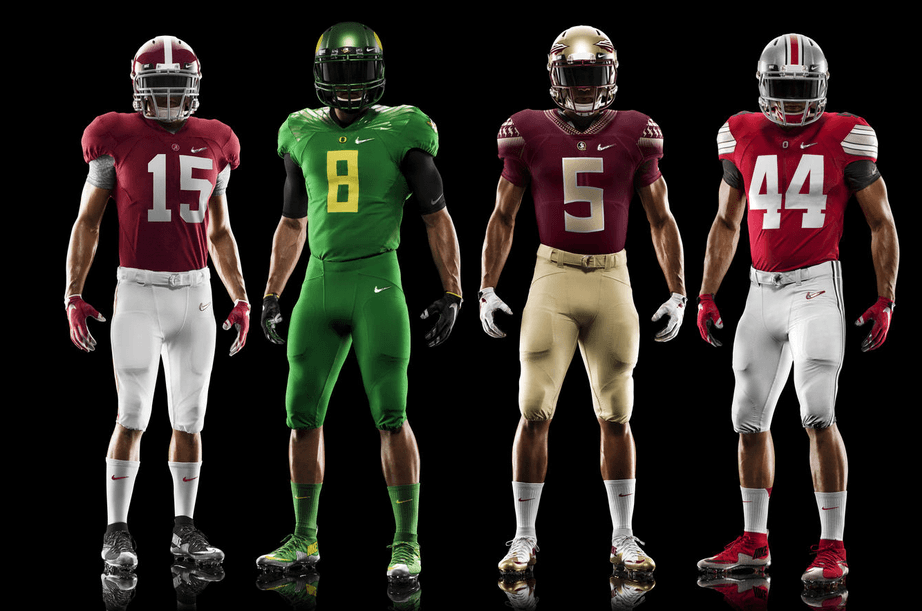 I’ll go with this:

1. tOSU — I’ve been really into Ohio State’s unis lately. Not sure why.
2. Oregon — Don’t love the monochrome but I do love the big “O” on the helmets. I actually prefer it to the wings, I think.
3. Bama — It’s TCU/Baylor close for me here with Bama and Oregon.
4. FSU — Lose the tribal sleeve thing, FSU.

Finally, it needs mentioning but Oregon delivered a final knockout blow to the 2014 uni season on Friday night. 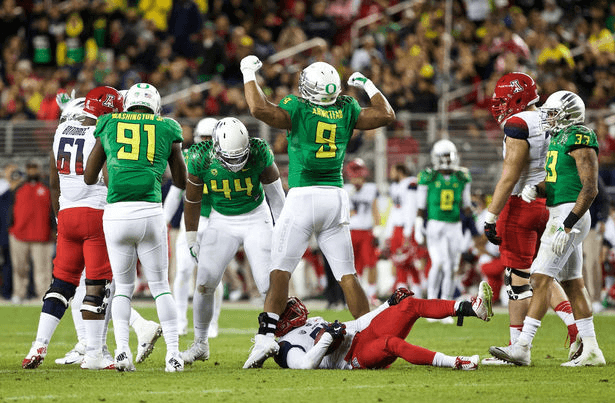 Southwell: It’s really hard for me to move away from B-B-O as the best combo. I’ll stick with that. I’d like to see those with the black version of the striped homecoming socks.

Hypothetical number one is probably the same as Carson’s: B-G-B. I think it would look best with the Black Pete helmet (surprisingly). Hypothetical No. 2 is Bronc-W-W with those socks. Too clean.

As for the Payoff unis, I haven’t seen anything to confirm this, but is it going to be color vs. color? That would be awesome.

1. Oregon — Like in everything else, they’re still No. 1. The O on the helmet has been missed. They could’ve gone with yellow pants and it wouldn’t be close.
2. Ohio State — Are those black numbers on the shoulders?
3. Florida State — Not much to say about them. I’d rather see their away jerseys.
4. Alabama — It’s Bama.

Oregon’s W-G-W was pretty awesome. They should have worn that the first time they played Arizona. 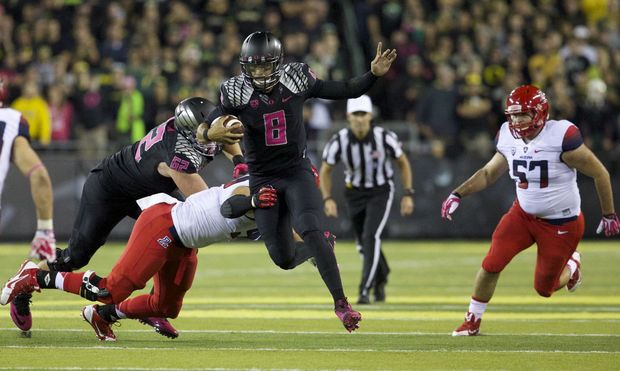 I wonder how Arizona feels about that combo now. Win some, lose some. 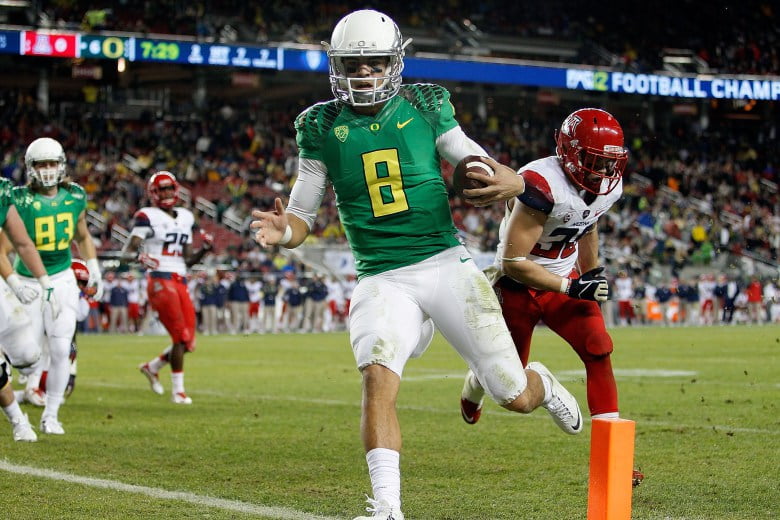 Cunningham: Hypotheticals is where it gets tricky. The combo I’ve always wanted to see is this (thanks to this handy site). 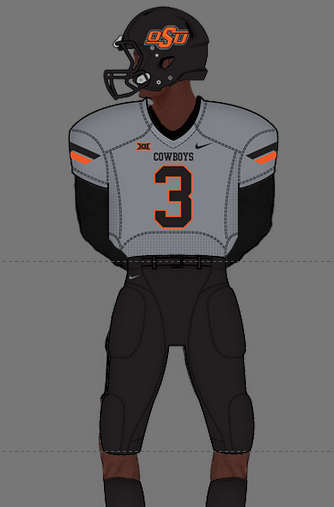 It’s mean and it’s a combo that’s been dangling there since 2011. Ripe for the taking. The black branded helmet is still the best helmet but if I must chose one with a new helmet I’ll go with this: 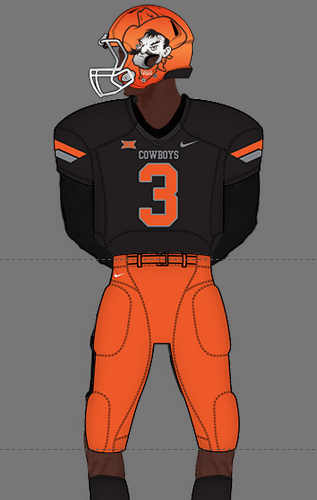 I’m a simple man with simple 1-2-1 uniform structure tastes. I don’t think it will take long to see Chrome-Black-Orange.

The playoff unis are that much different than their regular uniforms. But I really liked the undershirt designs.

I thought Ohio State was winning when I saw theirs. They apparently enshrined Woody Hayes’ last chalk board session and recreated it here. How cool is this? 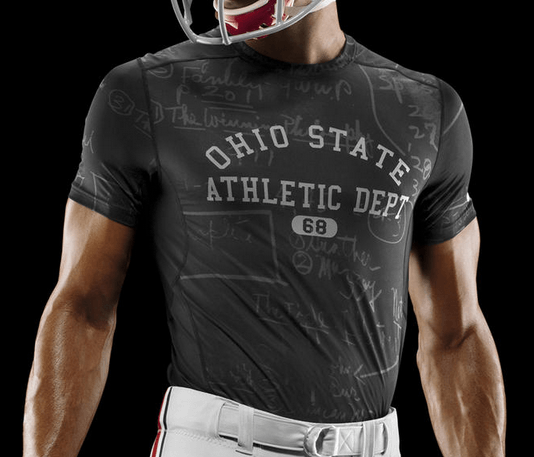 But, we know who wins:

Oregon’s undershirt looks like a Ghostland Observatory concert. They “Win The Day”, as they like to say.

But I will say this: It’s bad uni-karma to change from the wings this late in the season. It reminds me of the 1995 Chargers who wore the powder blues all season, then wore their traditional navy against the 49ers in the Super Bowl. (They lost 49-26).

The Ghost of Natrone Means is disturbed by Oregon’s decision.

One thing we will all agree on — The Diamond Swoosh:

Porter: That diamond swoosh is preposterous.

I like what we have here. We covered the exorcism, the Playoff unis, and the best hypothetical OSU unis. Good stuff, fellas.