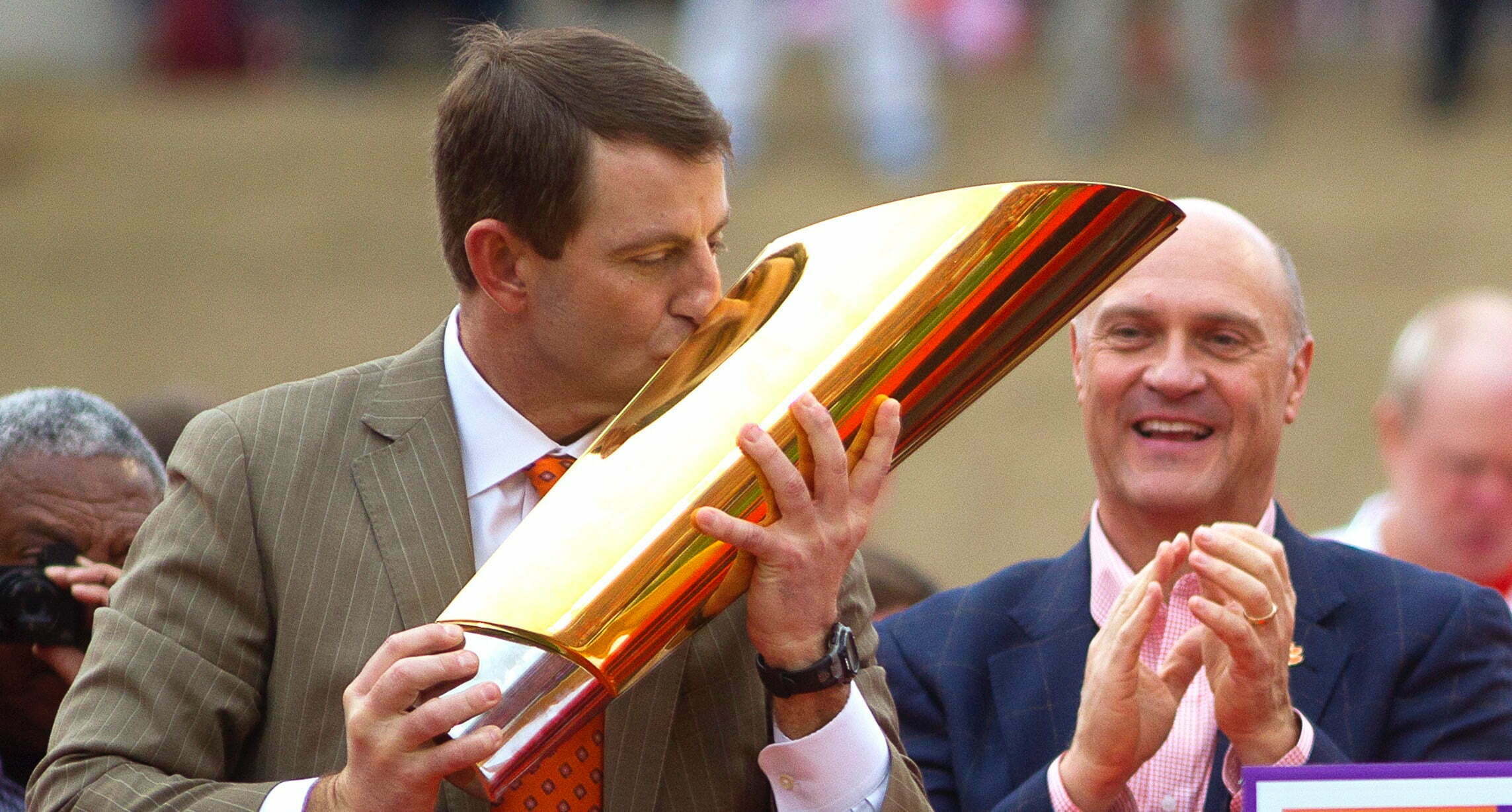 Last year, friend of the blog Justin Browlee wrote a terrific piece entitled The Juggernaut Theory. Many of you will remember this as a long essay on why the same teams keep winning (and playing for) national championships in the modern era. If you haven’t read it yet, you can do so here.

I was re-reading it the other day and came upon an interesting part.

The early November rankings of 2015 were probably the most laughable of any. While Clemson, a non-juggernaut, albeit a Southeastern school with some tradition. We should add here that Clemson is ranked No. 1 because of wins over juggernauts in Notre Dame and Florida State. If they would have beat a one-loss Utah and a two-loss Syracuse, they probably wouldn’t be there held down the top spot, the rest of the top four were juggernauts. The most glaring aspect of the three juggernauts is that two of them are ranked in the top 4 with a loss, while several non-juggernauts sit outside of the top four with no losses!

So did a non-juggernaut just play for two straight titles (this was written before last year’s title game) and win one of them? I hit up Justin (and Carson Cunningham) and we discussed whether The Juggernaut Theory is dead.

They are a curious case because they won a national title in 1981. In my opinion they have taken Miami’s place in the national sphere. It’s them or FSU in the ACC every year now. But if they had two losses they probably don’t get the nod over Oklahoma for the playoff. So not quite a Tier 1 juggernaut, in my opinion.

Man…that is a great question. My wife and I were talking about that after the game, they’ve really thrown a wrench into the theory. Ultimately, I think that the playoff is the catalyst that opens the door to common programs. At eight teams, the door is cracked open, at eight teams, it’s really open.

As for Clemson, I think a couple of things are at play. For starters, that region can only support a couple of great teams. Think about UGA, Georgia Tech, South Carolina, Clemson, maybe you would throw Tennessee and North Carolina schools in there … recruiting wise it’s not Texas, Florida, Louisiana … yes there’s way more talent in that region than Kansas, but it can’t support 5-10 great programs. So UGA and USC were really solid for 7-10 years, they both fall off and here comes Clemson.

Now I have to wonder what kind of level Clemson is cheating at. I’m sure tons of programs cheat and stuff, but they were very average-to-good for decades and all of a sudden the second UGA and USC slip a little they have monsters all over the field. I feel like they lost some real athletes last year and came back with grown men on both sides of the ball.

Keep in mind, before these last two years, they had the one BCS bowl game they snuck into and upset Ohio State, but past that there was only one BCS bowl appearance and it was the orange bowl that WVU demolished them (basically the same WVU team that the big 12 dominated in 2012). I don’t think they had a conference championship in either of those years, so I would argue Oklahoma State and Kansas State are more accomplished programs (that’s if you buy into my thought that ANYTHING prior to 90s means very little) prior to 2015.

But, without going on too much longer, Clemson is totally a juggernaut now. You win it all, that’s it. You’re in the club. Regardless of me thinking they could be below OSU/KSU two years ago, they won and that’s a really really big deal.

That’s an interesting debate though, whether or not The Juggernaut Theory is dead. There’s a lot of different interesting talking points we could discuss with it — what does it take for someone to drop out of the juggernauts, what’s it take to get in, who are the programs that have tradition but aren’t there and why aren’t they there (A&M, Penn State etc) … shoot, Clemson has raised their profile by catching juggernauts at the right time the last three years (Ohio State in 2014, FSU, Miami, auburn this year before they got hot). You can be rewarded in the polls for beating over ranked juggernauts (N.D., Texas)

I was actually surprised Clemson wasn’t in that original “I don’t know what to do with them” group with Auburn and Oregon (do we count them … they don’t seem to be in the same class as Auburn/Clemson) I’m not as much of a CFB history buff as you (or probably Carson), but it seems like they would have fit that bill.

If that is (retroactively) true then I don’t think them winning it all is a death to the theory. I think there is a group of sorta-juggernauts (those three and maybe a few others) that can win it all and it still holds up. I actually would have more of an issue with the theory if Oregon had won it all (RIP Joey Heisman’s campaign).

I will say this with The Juggernaut Theory — the biggest argument against me that came up was that I just looked at the last 20 years or so and put everyone that made a title in the group and called it a theory. I obviously disagree, and while my list isn’t perfect, it is pretty solid. I don’t think I would retroactively add Clemson as much as I would just say that a national championship opportunity growing from two teams to four and hopefully to eight will slowly breakdown the juggernauts’ stronghold on college football.

With Clemson and their national perception, you’re not wrong. I think lots of people two years ago would put Clemson in a list of top 15-20 programs. Maybe it’s because of the 80’s title … and few people embrace my idea that any title before the 90’s is comparable to maybe winning a single conference road game today and I get that.

That also goes to show how big of a deal a national title is. How many times have you heard someone talk about a non-juggernaut team and say how miraculous it is that they win or ask, “how could you ever convince a kid to come to Manhattan, KS?!?” I mean, have you seen these other college towns?

South Carolina is consistently voted one of the five most miserable states in America. There is nothing in Clemson, just like there is nothing in Auburn, Lincoln NE, and upwards of 80-90 percent of all college towns. Most schools don’t get to call Austin or L.A. home, most schools are in a boring tiny town 3-5 hours away from a metroplex.

But no one ever asked that about Clemson. They were given more respect, even two years ago, whether that was appropriate or not. (Obviously now it’s extremely appropriate)