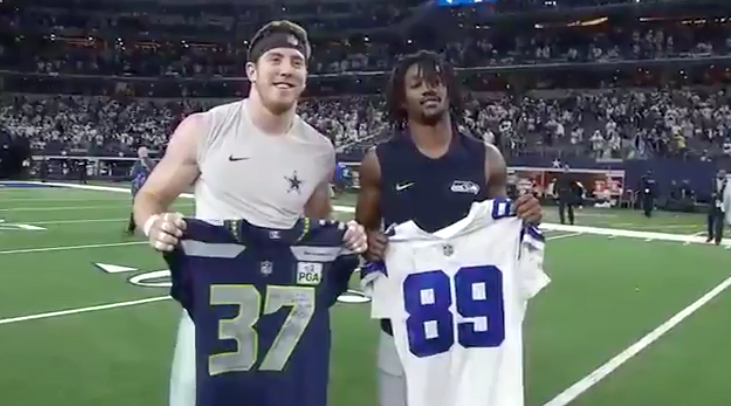 Saturday’s NFC Wild Card game carried major stakes. For Dallas and Seattle, it was win or go home. For OSU fans, that meant seeing at least one former Poke on either side seeing their season end early.

Blake Jarwin and the Cowboys got it done, advancing with a 24-22 win over the Seahawks and simultaneously ousting his former teammates, Tre Flowers and Chris Carson. After the game, the two swapped jerseys and cheesed for a pic. Flowers even promised Jarwin he’d give him a shout in the offseason to get some work.

Among the trio of former Oklahoma State standouts, it was Chris Carson who had the biggest impact. He logged 13 carries for 20 yards rushing, and added 2 receptions on the afternoon. But Seattle wasn’t able to establish its lethal rushing attack against Dallas and its stout defensive front, and stood tall in limiting the Seahawks to 22 — one of their five lowest scoring outputs all season.

A week after his 7-reception, 119-yard and 3-TD outing against the Giants, Blake Jarwin caught all three of his targets for 15 yards. Flowers, for his part, logged 2 tackles.