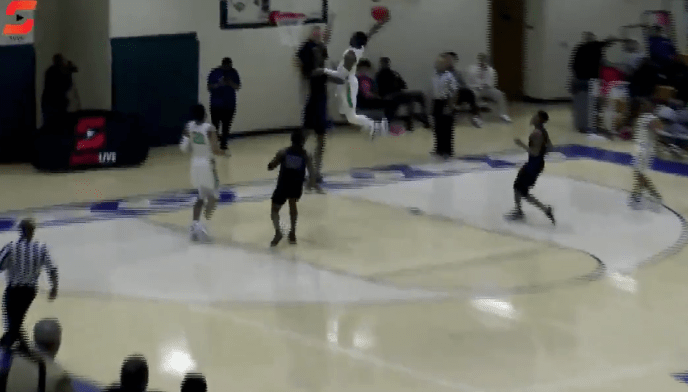 In the midst of a trying season for the Oklahoma State basketball team, Saturday was a breath of fresh air in more than one way. Not only did the Pokes pull off a win over a rock-solid South Carolina team, but their star recruit, Marcus Watson, provided some hope for the future.

And he did so with both feet in the air from hundreds of miles away.

The top-100 signee from Buford, Georgia, threw down a stunning slam on Saturday as Buford High School cruised to a win over Ridge View. He went full posterization over a poor defender, rearing back for a one-handed dunk that landed with ease.

No rim or defender is safe when Marcus Watson is airborne. It'll be hard to top this one at the #PTCinv@Buford_MBB leads Ridge View 61-47 in the 4th

Watson is the highest-rated incoming recruit for OSU in the 2019 class and, oddly enough, a family member — the two are cousins.

“Marcus is a unique talent,” Boynton says of him. “He’s a rare kid in the sense that he’s physically ready probably to help now. Now, he’s got a ways to go from a mental standpoint. But he has a tremendous work ethic.”

Watson will be called upon to play early at Oklahoma State, and regardless of whether he plays at the 2 or the 3, his athletic ability and defensive versatility and his dunking — actually, especially his dunking — should give him an opportunity to contribute immediately.