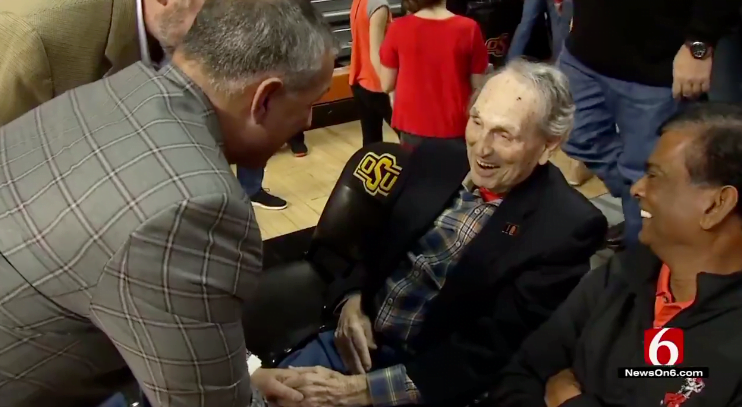 The coaching paths of Eddie Sutton and Frank Martin never crossed consistently — Sutton left OSU after 2005-2006, and Martin joined the Big 12 as a Kansas State assistant in 2006-2007 — but there’s a mutual level of respect between the two, particularly on the part of Martin.

Martin parlayed a successful high school coaching job into a gig at the Division I level spanning from the mid 80s to the early aughts, during which time Sutton was thriving at Kentucky and then at Oklahoma State. It’s easy to assume that Martin likely once saw him as a role model of sorts.

Martin paid his respects to the legendary coach Saturday inside historic Gallagher-Iba Arena after his South Carolina team lost to Mike Boynton and Oklahoma State, and the two shared a special, albeit brief, moment together courtside.

Martin left K-State in 2012 to become the South Carolina head coach, where he’s been ever since. But he’s always been an arm’s length from Oklahoma State, being in the Big 12 as long as he was and now still being tied to the conference in some ways.

In 2016, in fact, when OSU hired Brad Underwood, Martin endorsed the hire and likened Underwood to Sutton in terms of coaching tree and concepts he used.

“He believes in, we still play it, the Jack Hartman 3-2 zone,” Martin told the Tulsa World. “That’s all the Coach (Eddie) Sutton, Coach Iba tree of coaching. Offensively, the concepts he uses, the concepts that I use come from that tree. I know the kind of respect that he always had for Oklahoma State.”

Martin went to four NCAA Tournaments during his stint at K-State before departing for South Carolina, where he once had a young Boynton on staff from 2008-2013. They still keep in touch from time to time, Martin said Saturday, and there’s an appreciation from Boynton that runs deep for the opportunity he was afforded to coach at his alma mater.

“Not sure I’ve thanked him enough,” Boynton said via The Oklahoman. “Not sure I could.”