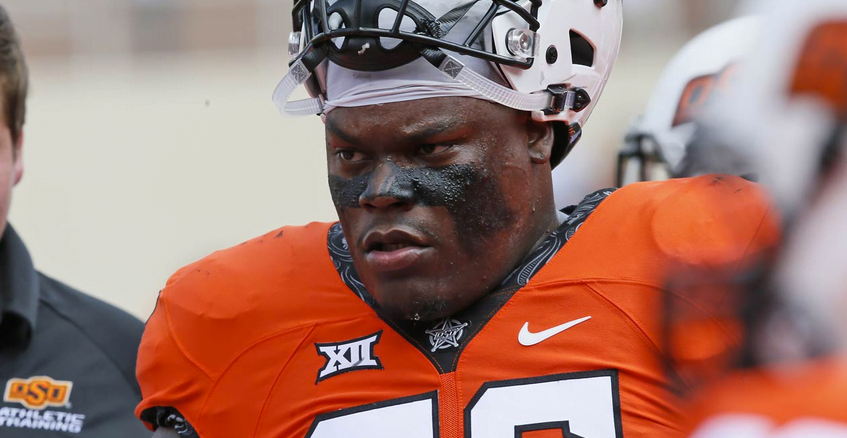 Junior defensive tackle Vincent Taylor is foregoing his senior year and declaring for the NFL draft.

It’s a huge blow for the defensive line group and defense on the whole. Taylor was the anchor of one of the strongest position groups for Oklahoma State this season. He could force extra attention on the inside. He opened up lanes for the young Cowboy defensive ends on the outside. And he could get after the quarterback as good as any defensive tackle in Oklahoma State history.

Replacing his 7-sack production will be tough to do. Replacing his wish-bone offensive ability to option the ball with a flicka-da-wrist will be impossible.

But for this particular situation, OSU may be in the best position it’s ever been in to replace a talent of his caliber. Recruiting lead by Joe Bob Clements has been nothing short of excellent, and development of that talent has been even better. OSU could, for the first time under Mike Gundy, go legitimately three-deep on the depth chart at defensive tackle last season. And even losing Mote Maile to graduation and Vincent Taylor to the NFL won’t slow them anytime soon.

Here’s a look at who I think will likely step into starting roles for OSU next season for the Pokes, and who will be elevated into enhanced roles:

That’s 3-deep once again. Who knows if any transfers, dismissals, etc. pop up. But that’s what I would project in any variation for next season. I could even add to that list of 6 who could contribute next season. Ioane Leilua, a junior college recruit, is a wild-card who will be in the mix as well. And Enoch Smith Jr., who I listed on the second unit, is a former Michigan State defensive tackle with legitimate Division I experience already. He too is a wild card who could come in right away and play.

The recruitment and development of the defensive line shows preparedness and foresight from the coaching staff. Did they have a feeling about Vincent Taylor? Perhaps. Before they knew though, they added Smith as a contingency plan. They have Daniels who played like a starter in spots last season, and get Leveni coming back from injury next season.

The mix of veteran presences and youth is perfect, as well. Four of those players on the first and second units have more than 2 years of experience either at the junior college or Division I level. Taaj Bakari has seen the field sparingly but still has his best days ahead of him, and Cameron Murray is an ace-in-the-hole freshman who redshirted in 2016. He has the potential to be yet another Joe Bob Clements product who makes it to the next level.

Remember when we were worried about the defensive line after losing Emmanuel Ogbah? The following year’s on-field product ended up as one of the most vaunted defensive line groups in OSU history. It’s just a sign of how far Oklahoma State has come in developing and producing big talent along the defensive line.

Based on how Joe Bob Clements has recruited — and how his talent has developed under his tutelage — it seems pretty likely the defensive line will continue to roll in 2017 and beyond.