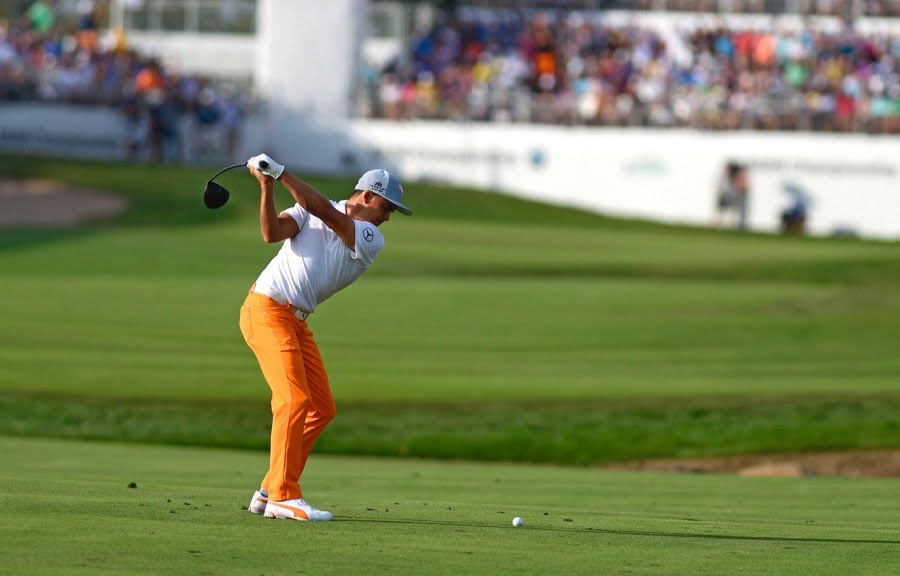 Rickie Fowler finished T2 at the BMW Championship last week at Conway Farms. He lost by five to Marc Leishman but remains in a good spot going into the final event of the season and potential $10 million first prize (more on that in a minute).

First we need to look at the two drivers off the deck Fowler pumped at Conway Farms. The first came on Saturday on the par-5 8th hole. He had 264 in and bludgeoned the thing. Fowler went on to make par there.

Driver off the deck. #QuickHits pic.twitter.com/BiyHn270Kc

Then on the final hole on Sunday from 281, Fowler went DOD and took the hardest cut I’ve ever seen him take. He needed a birdie to get into the top five of the FedEx Cup going into the Tour Championship but had to settle for par at the par-5 closing hole.

Needing a birdie to make it into the #FedExCup top 5 …@RickieFowler takes out the driver. #QuickHits pic.twitter.com/0rG7eOAwXP

Fowler remains the best driver off the deck guy I've ever seen. He hit a DOD draw on 8 at Chambers Bay on Wednesday that froze everyone

Back to why the top five of the FedEx Cup standings are important, though. If Fowler was in the top five — he’s currently No. 6 — he would control his own destiny at the Tour Championship. As it stands, Fowler has to win the Tour Championship and have Jordan Spieth finish 3rd or worse to take home the FedEx Cup and $10 million first prize (of course second prize is $3 million so … whatever).

Fowler has been as consistently good as anybody on the PGA Tour this year — he is currently No. 2 in strokes gained overall — but has just one win on the season to show for it. Dustin Johnson and Jordan Spieth sandwich him in this statistical category, and they have won four and three times respectively this year.

The homecoming grand marshal been my pick throughout the playoffs to take home the $10 million crown, though, and he’ll remain so this week.

” It would have been nice not to have some 3-putts,” said Fowler after the BMW. “That was a bit of a downer. Outside of that I think we hit a lot of good putts, made some good putts.

“I chipped a lot better this week than the last couple, the ones where I didn’t finish in the top 10. I feel like the rest of the game is right there. The short game is not there. It’s a struggle sometimes to hang around the top. So, no, it’s been a fun year. I’m looking forward to next week. I think it will all come together at the right time.”