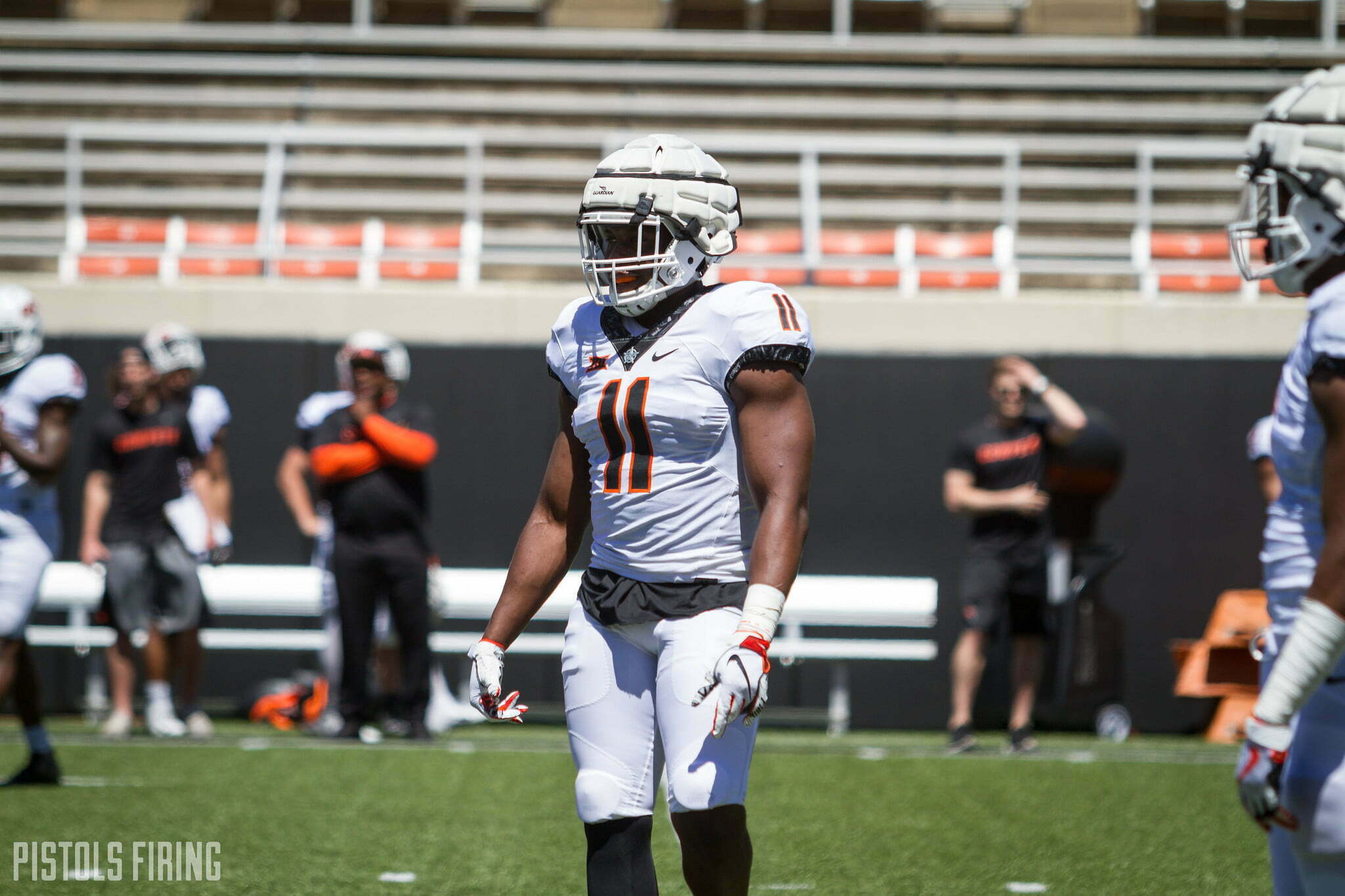 With how inexperienced the Cowboys will be on the defensive line this season, their defensive front would benefit highly from solid play at linebacker.

Oklahoma State will be without Justin Phillips, who started 26 games in his OSU career and led the Cowboys with 98 tackles last season. With that said the Cowboys still bring back some experience at the position, but depth could be an issue. Here is what we learned about the Pokes’ linebackers this spring.

The Cowboys have 22 returning starts to their linebacker unit for 2019, but 20 of those belong to Calvin Bundage.

The other two of those starts are split between redshirt junior Devin Harper and redshirt senior Kevin Henry. Harper missed the spring with a foot injury but had a solid sophomore season. In 2018, Harper had 44 total tackles to go with an interception and a forced fumble despite having only one start.

Henry didn’t make as big of an impact on the stat sheet as Harper did last season, but Henry started the Liberty Bowl. He finished the year with 10 tackles.

Bundage has started the past two seasons. He missed the Cowboys’ final two games with an injury, but still finished with 62 total tackles, the fourth-most on the team.

Talk about the group was somewhat quiet this spring, as a lot of defensive talk was spent on the D-line and how that group can replace all it lost.

Ogbongbemiga’s Time to Step Up

One guy who did get brought up a few times was Amen Ogbongbemiga.

Entering what will be his redshirt junior season, Ogbongbemiga will play an increased role in 2019 with the departure of Justin Phillips. Ogbongbemiga took a step forward as a sophomore, highlighted when he sacked Kyler Murray in Bedlam.

“He’s improving and getting better,” Gundy said. “With the departure of the guys that had played here before him, now it’s his turn to step up. He needs to play well. He needs to be a leader both on and off the field, and I think he’s making those strides. Obviously we’ll know a lot more once we get going.

“I’m always somewhat tentative to jump on a table for somebody until we see him fight through October. They have to be strong mentally and physically in August and play well to lead and be tough and all those different things, and by the middle of October, we usually know if those guys are in a position to preform what we’re asking them to accomplish.”

Behind Bundage, Harper, Henry and Ogbongbemiga there are plenty of questions.

There were nine other linebackers on the Cowboys spring roster, all of which have little to no experience. The most experienced is redshirt senior Philip Redwine-Bryant, who was voted as a team captain and was a 2018 Walk-On of the Year. He played in all of OSU’s games last season, but most of that time was spent with special teams, as all five of his season tackles came on kickoffs.

Na’drian Dizadare is on campus this spring as an early enrollee. Blake Barron also returns after redshirting in 2018.

That lack in solidified depth led to LC Greenwood seeing some opportunity. Greenwood was a part of OSU’s 2017 recruiting class, where his was the 35th-ranked wide receiver in the country. He played both ways in high school and chose to switch sides of the ball after playing in only three games as a redshirt freshman.

Setting expectations for Greenwood are difficult at this time because a few weeks ago, Gundy said Greenwood was still just trying to get lined up correctly. Greenwood said Bundage, Henry, Harper and Ogbongbemiga have been helping him with anything he needs including watching extra film with him.

The Cowboys have capable linebackers, but they are thin depth-wise. An injury or two could spell doom for the group, but it could also give an opportunity to an unknown the public just haven’t seen yet.